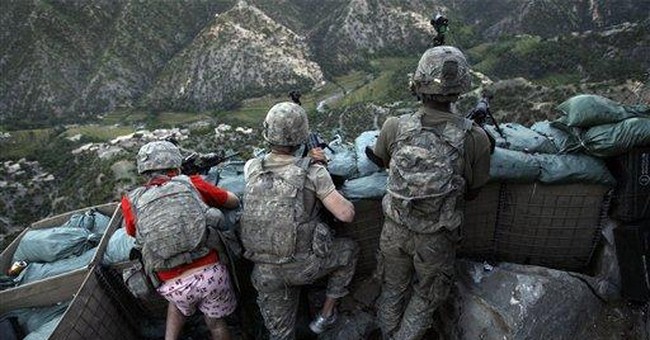 In November 2002, a Hellfire missile launched from a CIA-operated Predator hit a vehicle on a road in Yemen's Marib province. The strike killed six al-Qaida terrorists, among them Qaed Senyan al-Harthi. Al-Harthi organized the October 2000 terror attack on the USS Cole (in the Yemeni port of Aden), which left 17 American sailors dead.

I wrote a column about the Predator attack shortly after it occurred, noting that the Predator-B's successes against al-Qaida, (including the November 2001 attack against al-Qaida bigwig Mohammed Atef) demonstrated how "arming the persistent sensor" creates opportunities to ambush even the most elusive targets.

Predator was born as an unarmed Balkans peacekeeper, a recon platform that could "loiter" over Bosnia and locate Serb artillery pieces shelling non-combatants. The U.S. needed "persistent eyes" over difficult terrain. Adding laser-guided missiles made Predator a sniper with extraordinary reach.

The Predator attack on al-Harthi comes to mind for two reasons. The first is al-Qaida has declared Yemen "a sanctuary" (StrategyPage.com, Sept. 19). American traitor Maj. Nidal Hasan's spiritual adviser, Anwar al-Awlaki, is allegedly hiding in Yemen. It is a chaotic and dangerous place. Saudi Arabia and the Yemeni government are currently battling Shia tribes in northern and eastern Yemen (which may be drawing support from Iran).

The second reason was President Barack Obama's reply to a question posed in a recent interview conducted by CBS News.

Obama replied: "And we go after them there, too." A moment later he added "I don't want to comment on certain sensitive aspects to our efforts in this (Afghanistan-Pakistan) border region. I think it is fair to say ... if we've got actual war intelligence on high-ranking al-Qaida leaders, or for that matter high-ranking Taliban leaders who are directing actions against U.S. troops, then we will take action."

Obama is pursuing one of the Bush administration's key policies of "holding at risk" terrorist leaders, which is a euphemism for targeting them. Is this assassination? The November 2002 column observed that (technically) al-Harthi died in an air attack. A terrorist's vehicle can be construed as a "command and control center" (a command bunker is a legitimate target), but doing so takes the concept to the edge of absurdity. The U.S. was hunting al-Harthi.

The United States bans political assassinations, but the U.N. charter permits military defense against attack. Al-Qaida wages a war without limits. Every American, in al-Qaida's war doctrine, is a permissible target. Al-Qaida's own decentralized organization is part of its offensive and defensive strategy. Individual al-Qaida members -- its suicidal terrorists -- are indeed its military weapons, hence Predator hits and special operations strikes.

Obama's reply also indicates he himself is facing one of the most difficult problems America has in this war: actionable intelligence. George W. Bush can testify, and likewise Bill Clinton. When do you pull the trigger?

Predators have operated over Pakistan for years. More advanced Unmanned Aerial Vehicles (UAV) are being employed in Afghanistan. Predator strikes in Pakistan began to increase in summer 2008. The exact number of strikes is classified. Several commentators try to keep a tally, however -- among them Bill Roggio at longwarjournal.org.

Roggio recently reported on Dec. 8 that "U.S. airstrikes inside Pakistan have tapered off since September" and that "U.S. intelligence officials said a big reason for the scaleback in attacks is that al-Qaida and the Taliban have adapted to the U.S. tactics, improved their operational security and have ruthlessly killed anyone suspected of providing intelligence to the U.S."

An irony lurks. Terrorists crow that they choose the place and time of an attack. Their claim of ubiquitous surprise, wherever you may hide, intends to sow fear. Predators, however, ambush them. Now, knowing wagging tongues will bring missiles, they murder their own.