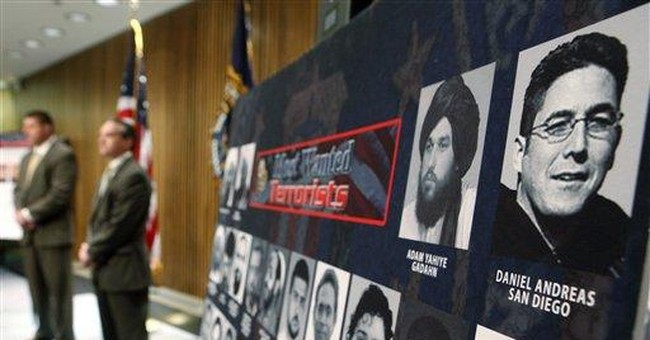 Napolitano's taxpayer-subsidized smear warned that citizens upset by high taxes might also gravitate toward violent, armed, anti-government organizations. Of course, she shoveled the report to the press just before April 15 -- the biggest day on the Internal Revenue Service calendar.

Are domestic terrorists a cause for concern? Absolutely. Timothy McVeigh, the Oklahoma City bomber and a right-wing fanatic, murdered en masse. Anarchist killer Ted Kaczynski (the Unabomber) murdered via the U.S. mail. The FBI's bust last week in New York of a rather dimwitted group of wannabe political killers is the latest reminder, though their supporters (they're domestic, and they've got them) are alleging entrapment.

The U.S. military swears an oath to defend the Constitution against enemies foreign and domestic. That oath is one reason I continue to oppose the likes of violent left-wing narcissists like Bill Ayers, the Weather Underground terrorist and trust-fund baby who now hobnobs with Chicago political elites and works as a professor. Ayers deserves to do prison time for his bomb plots and conspiracies to murder innocents.

Napolitano should have waited for the publication of the Foundation for Defense of Democracy's "Homegrown Terrorists in the US and UK." Written by Daveed Gartenstein-Ross and Laura Grossman, the empirical study examines "homegrown" Islamist terrorists in the United States and United Kingdom, with terrorists defined as "homegrown" when they have "spent a significant portion of their formative years in the West, or else their radicalization bears a significant connection to the West."

The authors analyzed 117 domestic terrorists and identified six "behavioral changes" that characterize the radicalization process. Though focusing on Islamist radicals who engaged in or provided illegal support for terrorist violence, some of the changes the authors described resemble behaviors associated with violent "non-sectarian" (so-called "purely" political) radicals.

?1) Accepting "a legalistic interpretation of Islam." Sometimes, individuals are nurtured along in this process by mentors who create "an uncompromising religious atmosphere rooted in a legalistic understanding of the faith" with the objective of making new members "ashamed" of their perceived failure to meet the legalistic requirements. This was, in fact, one of the key factors that pushed the "Lackawanna Six" over the brink.

2) Over time, only trusting "the interpretations of a select and ideologically rigid set of religious authorities" (contrary opinions by well-educated, yet more moderate, imams are dismissed or ignored).

3) The evolving radicals "perceive an inherent schism between Islam and the West -- believing that the two are at odds, and perhaps even incapable of coexistence." The authors point to radicals who argue that "participation in democracy violates Islamic religious principles." Obligations are "to Islam alone," and a jihadist "cannot have ... duty or loyalty to a non-Muslim state." (This particular behavior is a key indicator of "later acts of violence.")

4) After internalizing "rigid interpretations of Islam" and becoming followers of hard-line clerics, the new radicals "view alternate interpretations and practices as not just incorrect theologically, but as personal affronts. In this way, any disagreement about religion may be personalized and met with a great amount of vitriol."

This change is reminiscent of "personal demonization" tactics pursued by hard-left and hard-right political groups. Chicago radical organizer Saul Alinsky in his classic "Rules for Radicals" advised radical political organizers to "pick the target, freeze it, personalize it and polarize it." The Weathermen did it. Al-Qaida would-bes do, as well.

5) Another sign of radicalization occurs "when individuals attempt to impose their religious beliefs on others." Imposition can take many forms, but psychological coercion can quickly become physical intimidation. This isn't a new insight -- violent cults often physically intimidate potential converts. Still, the action serves as an "intelligence indicator" for police monitoring radicalizing groups.

6) A key indicator of "political radicalization" is acceptance of a "jihadist political narrative" that follows this rough outline: "Western powers have conspired against Islam to subjugate it, both physically and morally. At the same time, Muslims worldwide have lost their faith and lack the strength that they possessed during Mohammad's time. The only proper response to the present situation is military action."

If this sounds like Osama bin Laden's cant, well, it is.