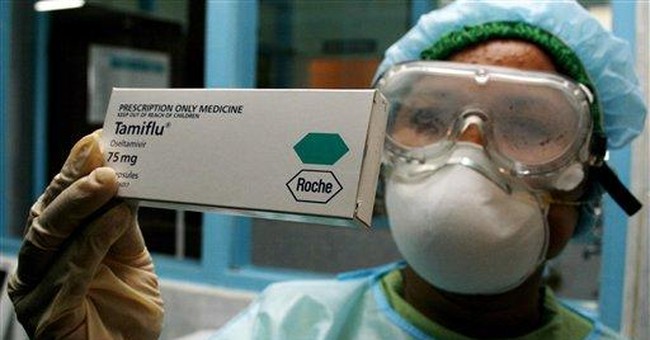 The devastating epidemic is spread by dread, of course -- dread powered by distortion, gossip and sensationalist greed.

The swine flu of 2009 is a threat, but another plague immediately associated with this genuine viral killer deserves to be slammed and canned for the manipulative and exploitative corn it is.

I refer to the Epidemic of Fear, a plague insistently poised to infect the entire planet.

This completely human-transmitted pox twists or ignores facts and seeds individual, institutional and international distrust. It stunts rational decision-making and promotes panic. When it strikes and persists, entire populations become vulnerable to the absurd but deadly toxins of conspiracy theorists.

Fear is truly "pandemic," with "all people" in the sense of the Greek roots (pan plus demos) at risk. Being human, at times, definitely means being scared.

Scary stories are exciting, a great way to pass the time around the campfire. I'm a fan of spy and crime thrillers, and at some point in the plot the imitation of fear is essential in those entertaining tales.

A physical anthropologist might argue that real physical fear can play an extraordinary role in immediate survival, triggering a "flight" reaction in our species, very useful when ambushed by cave bears or an automobile that isn't going to stop for the crosswalk. It could trigger a "fight" response, as well, perhaps providing an adrenaline edge when confronting a raiding party from an enemy tribe or a kidnapper who has grabbed your child. In these circumstances, fear may have an upside.

Fear's downside is huge. Fear also freezes -- stupid deer get trapped by headlights, and stupid politicians get trapped by headlines. The shakes can also produce a self-destructive frenzy that wastes time, costs money and confuses decision-makers, and in so doing, ends up turning a manageable threat into a monster.

This type of lurid exaggeration ultimately costs the sensationalists -- they do lose credibility. Consider CNN's Anderson Cooper as a case in point. His ratings continue to slip. Cooper certainly got a short-term surge during Hurricane Katrina, when he urged hurricane survivors he was interviewing to "show rage." Treacly theater, lousy reporting.

Reacting to the excess, skeptics recall 1976's swine flu outbreak, when spurred by fears of a 1918-type influenza disaster, President Gerald R. Ford ordered mass inoculations. The virus proved to be less virulent, and Ford was ridiculed. Thanks to Internet archives, skeptics have access to 1976 television public service announcements pushing mass inoculations. A kiss passes the virus from husband to wife. A cough or conversation gives it to a cab driver. A lurking subtext: Fear other people.

2009's most noxious headlines echo that ugliness. This time, we're to fear Mexicans and Mexican products. Fearing Texans and New Yorkers may be the next phase, since school kids in those states have contracted the illness.

The Centers for Disease Control provides a balanced, rational response. Instead of fearing other people, the CDC recommends washing your hands and staying home if you feel ill. As of 11 a.m., April 28, the United States had 64 lab confirmed cases and no deaths. The figure will rise. It may prove to be virulent. There will be deaths -- there always are. The CDC Website notes that every year "ordinary" flus play some role in 36,000 deaths (e.g., the flu leads to fatal pneumonia).

Precaution is common sense. Explore the swine flu's genes, and push for a vaccine. Prepare to quarantine, if necessary. Stockpile antivirals, and thank the folks that developed them. Pharmaceutical companies (often demonized by benighted politicians) wage a constant war against mutating viruses. Foresight, often energized by a quest for profit, can provide a curb, if not a cure, for fear.