When the Human Shield Slips 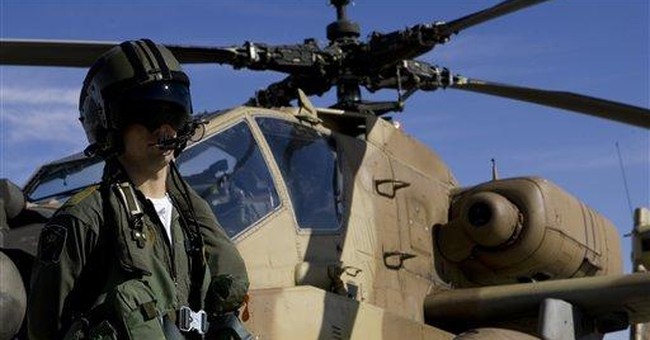 The phrase "involuntary martyrdom" is a hideous clue to contemporary terrorists' perverse notions of battlefield victory and their means for pursuing political power in the 21st century.

Reduced to ugly essentials, "involuntary martyrdom" as practiced by Lebanon's Hezbollah and the Palestinian Hamas organization amounts to taking their own civilian populations hostage. With this "human shield" positioned, they attack Israeli homes, schools and hospitals with rockets fired from launch sites located near Lebanese and Palestinian homes, schools and hospitals.

Hezbollah and Hamas also build "meshed, networked static defense systems" comprised of bunkers and tunnels in their human shields' neighborhoods and selectively booby-trap houses with high explosives. They then dare Israel to counter-attack and, in the process, kill thousands of Arabs while losing several score Israeli soldiers in close combat with guerrillas.

As the body count rises, Hezbollah and Hamas provide global media with heart-rending video featuring dead bodies and wounded survivors. Anti-Israeli protests erupt in European capitals, and Israel is once again "condemned by the international community" for committing war crimes. The United Nations drafts a ceasefire deal, as Hezbollah and Hamas leaders -- the men who employ this strategy -- proclaim victory because they survived the Israeli attack. No ceasefire ever lasts with such men. Within 24 months they fully intend to employ the same criminal strategy again.

And it is criminal. Using a hostage as a "human shield" is a criminal technique. We've all seen the Hollywood dramatization, where the pistol-wielding thug grabs his beautiful, naive accomplice and places her body between him and the police. The crook bets that the cops value the accomplice's life. A cruel paradox guides the bad guy's gamble. He relies on the police observing moral and legal codes he himself disdains.

The tension jumps several quanta if the sociopathic gunman fires at a policeman and kills him. Does the cop's shaken partner hold fire or risk hitting the hostage?

A fictional film might have a hero cop make the perfect shot, drilling the bad guy in the forehead with laser-accuracy. Combat operations in densely populated areas, however, face the fact of inevitable destruction and death. There will never be several thousand perfect shots.

But the Israelis have in Gaza -- so far -- fought three weeks' worth of war with very astute shots, demonstrating that Israeli defense and intelligence agencies have learned from the 2006 Rocket War. While Hezbollah touted victory, the Israelis publicly and privately critiqued themselves. They also dissected Hezbollah's political and military operations and those of Hezbollah's sponsor, Iran. Iran also serves as Hamas' financier and collaborator.

Bottom line: Israel would not play into the "involuntary martyrdom" trap again.

What may prove to be history's most detailed and intimate "intelligence preparation of the battlefield" operation preceded the Gaza offensive. Israeli intel identified weapons caches and bunkers, then got the names and phone numbers of Gazans living near the targets. Intel also established the daily routines of Hamas leaders -- the guys who claim victory after their people are slaughtered -- and determined likely escape routes and hideouts.

Israel's anti-Hamas assault began with a concentrated, 220-second-long precision weapons attack on Hamas' leaders -- not quite the equivalent of a "sniper shot" at our Hollywood crook as he moves to grab the hostage, but based on the same concept. Phone calls to Gazans living near (or in) bunkers and weapons caches preceded attacks on those targets. Fearing their cell phones will be triangulated (and then targeted), Hamas' Gaza leaders have remained hidden and largely unavailable to mass media. That's put a lid on the victory bombast. Israeli ground troops are using probing tactics that have turned static defenses into death traps.

Yes, Gaza and southern Lebanon differ in terms of terrain and size. Indeed, Syria can quickly resupply Hezbollah. Obviously, Tehran is a long way from Israel. However, involuntary martyrs are no longer the personal and political shield they once were for Hamas' leaders. Perhaps they'll tell Hezbollah's leaders and a few of Tehran's mad mullahs. Will fear for their own skins deter rocket attacks? Hey, it's a thought.