Aryssa Damron
|
Posted: Oct 13, 2016 12:01 AM
Share   Tweet
The opinions expressed by columnists are their own and do not necessarily represent the views of Townhall.com. 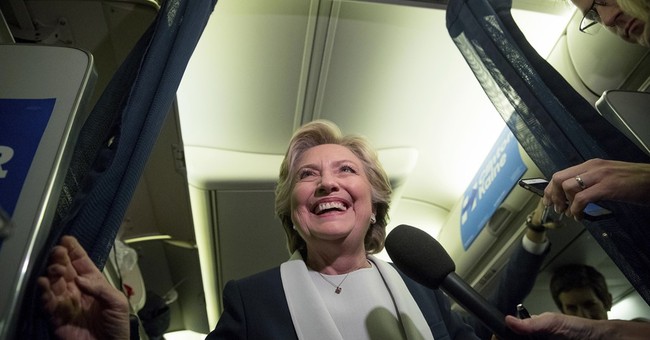 On July 5th, 2016, all of America tuned in as FBI Director James Comey announced that Hillary Clinton was too big to jail. In Ed Klein’s new book, Guilty as Sin, the seasoned Hillary investigator reveals the indictments that Clinton was facing and explores how the scandal-ridden former Secretary of State skirted those indictments using her chain or corruption.

The FBI investigation surrounding Hillary Clinton’s private email server was shrouded in mystery for much of its existence. The common citizen could only speculate about what possible indictments were pending and if Clinton would be held accountable for what many people viewed as negligence, idiocy, and even criminal activity.

There is no doubt that there are laws in place to punish people who do what Hillary Clinton eventually admitted to doing. This includes 18 U.S.C> Sec. 793 (f) which makes it unlawful to send or store classified information on personal email. There is also the 2009 National Archives and Record Administration Act, which requires any emails sent on off-agency systems to be stored by the agency.

Though she denied it for a while, Hillary Clinton eventually admitted to doing what amounts to violation of both of those federal laws. The strong arm of the law was pressing down on her. It was only a matter of time until people started wanting answers from the people doing the investigation and not just talking heads on the television.

On July 5th, 2016, the FBI Director finally spoke, and even as he listed the ways in which Hillary Clinton had flouted law and flirted with negligence, it became clear that Hillary had gotten away with it all. She was not going to be held accountable like others in government were or like any normal government employee would have been. No. On July 5th, 2016, the FBI Director revealed that Hillary Clinton was going to get off scot-free.

Guilty as Sin, Ed Klein’s new expose of Hillary Clinton’s culture of corruption, reveals the FBI indictments that she avoided in scathing detail, but you can get a sneak peek at them now.

2. Disobeying the law that required her to preserve emails sent or received from her personal accounts

3. Sidestepping the Freedom of Information Act

4. Ordering her aides to send classified material on her unsecure private network

5. Blatantly flirting with the “gross negligence” clause of the Espionage Act

6. Transferring classified information from other organizations (including the CIA) to her private, unsecure server

8. Writing countless emails full of classified information to people who did not have security clearance

Hillary Clinton skirting just one of these indictments would have been outrageous, but her avoidance of ALL of the possible indictments was unbelievable to many. Anyone who truly knows Hillary or the way she operates should not have been surprised.

to read more about the indictments Hillary Clinton was facing and how she got away with it all.