Aryssa Damron
|
Posted: Oct 12, 2016 12:01 AM
Share   Tweet
The opinions expressed by columnists are their own and do not necessarily represent the views of Townhall.com. 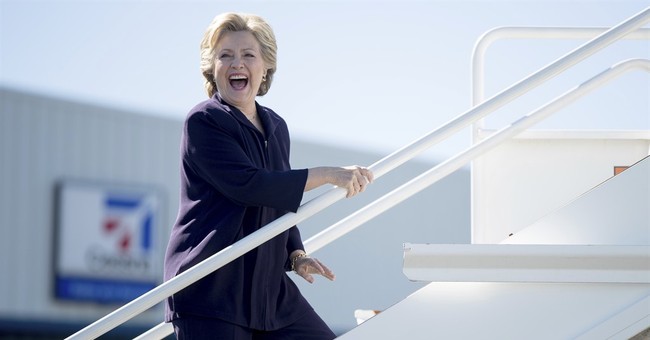 Ed Klein’s latest book, Guilty as Sin, exposes Hillary’s life of corruption case by case, but her fatal flaw, dishonesty, weaves itself through each and every sin.

Hillary Clinton cannot help but lie—it’s natural to her at this point. Here are 7 of Hillary’s biggest lies as exposed in Guilty as Sin, which together point towards her being a pathological liar.

1. LIE: All of her grandparents were immigrants to the United States

Hillary Clinton told a crowd of supporters in Iowa, “All of my grandparents, you know, came over here. So I sit here and think, well you’re talking about the second, third generation. That’s me, that’s you.”

TRUTH: Only one out of four of Hillary’s grandparents were immigrants. Why did she have to exaggerate and lie about three of them? That’s just what Hillary Clinton does.

2. LIE: She criticized the war in Iraq before Obama did

Hillary, wanting to come off as a good liberal, said, “I actually started criticizing the war in Iraq before Obama did.”

TRUTH: Even the Washington Post, not exactly the leading newspaper of the “Vast Right-Wing Conspiracy” recognized this lie. They gave her a ‘Pinocchio’ for this lie in “The Fact Checker.”

During the life of her email scandal, Clinton came out and said that she “did noT mail any classified material to anyone on [her] email. There is no classified mail.”

Hillary Clinton stated that mega-donors to the Clinton Foundation did not receive special treatment while she was secretary of state, but eyewitness accounts, as documented in Unlikeable: The Problem with Hillary, tore that lie to shreds.

TRUTH: Wealthy foreign donors DID receive special treatment, including a Canadian businessman, who after donating to the Clinton Foundation and paying Bill Clinton an honorarium of half a million dollars, was allowed to sell control of 20 percent of American’s uranium production capacity to Russia. Sounds like special treatment to me.

5. LIE: Clinton voluntarily handed over all of her work emails

Hillary Clinton claimed that she voluntarily turned over all of her work emails to the State Department, but volunteering usually doesn’t require the force of a subpoena first.

TRUTH: Hillary Clinton was not going to turn over those emails, until a subpoena forced her to, and even then, she withheld several Benghazi-related emails exchanged with non-State Department employee Sid Blumenthal.

The impetus behind Clinton’s private, poorly secured email server was “convenience,” she and her staff claimed. This convenience included the ability for Clinton to only use one phone, because two or more would have been too much to handle.

TRUTH: Clinton owned SEVERAL electronic devices, and she wasn’t even the one who carried them. Her right-hand-woman, Huma Abedin, had that honor.

7. LIE: Colin Powell told her to use a private email server

In an attempt to cover her own hind end, Clinton had the audacity to claim that Colin Powell, former Secretary of State and one of the most respected statesmen in the United States, told her to circumvent the law and use a private email server.

TRUTH: Powell refused to be slandered and said, “Her people have been trying to pin it on me. The truth is, she was using [the private email server] for a year before I sent her a memo telling her what I did.”