National Health Control is Neither Moral Nor Ethical 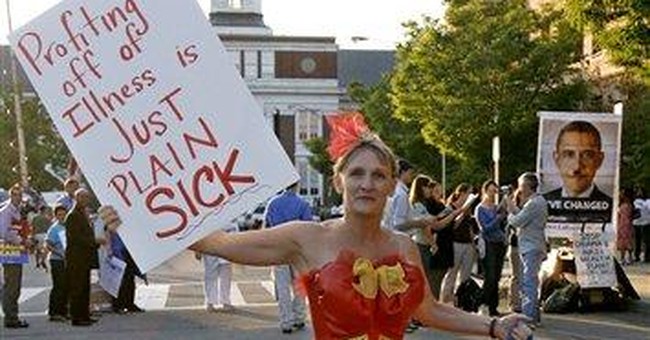 President Obama is having difficulty convincing most Americans that national health control will improve their lives and now has turned to the clergy to persuade the American public that upending our present system is necessary to fulfill, as he says, "the religious obligation of helping others.” Recently, he held a conference call with a group of liberal Jewish rabbis and he suggested that they use their pulpits and sermons during the upcoming Rosh Hashanah, the Jewish New Year, to convince their flocks that his national health control legislation constitutes the "moral and ethical thing to do." The President went on to say: "I need your help," and many that listened appear eager to turn their Houses of Worship into lobbying pulpits.

Aside from the blatant entanglement of religion and politics, the President is wrong in asserting that national and collective health control is a moral and ethical prescription. Everyone agrees that the President's plan will cause a new rationing of health care. There’s also the danger that the President’s “comparative effectiveness research” will set cost-effectiveness standards to be used against Medicare enrollees to deny them life-extending new drugs or operations because it’s not “worth it.”

But the Bible, in Deuteronomy, explicitly states:” Therefore Choose Life," meaning that where life can be prolonged and the ways and means to do so are available, one should choose to live. While that person's life may not be valuable to the collective scheme, it has its own integrity and value to family. For most Americans, the Biblical directive toward the individual supercedes what the bureaucrats will one day decide. People should be free to choose.

In Exodus, the Bible says: "And heal and continue to heal." Healing should not be stopped when medicine is available and one is willing to pay for that healing. Nowhere does the Bible suggest that an individual should forego healing medical care simply because someone else doesn't have the means or chooses not to do so. Rationing and enforced health-care ceilings would deny the individual from pursuing his healing.

Just as Biblical justice never asked that a person forfeit his rightful claim in a case simply because the other person needs the money more, it also does not ask that the individual relinquish his or a member of his family's right to live or to be healed because a misguided "social justice" demands a system that denies the individual on the altar of the collective.

True, some no longer look to the Bible for what is moral and ethical, but the President is citing the Bible and trying to co-opt the clergy in the name of his health care plan.

The excellent and cutting-edge medicine and life enhancements that most Americans now pay for and receive would be sizeably cut so as to cover everyone and equalize the coverage. But helping others never requires that we forfeit that which we desperately need for ourselves nor does it want us to totally forfeit what is already ours. While the Bible, for example, asks the grower to leave the corners of his field to the poor, it doesn't demand that the farmer give up his entire field to the poor and that he have no greater share than those collecting off him.

Many will end up paying in taxes far more than what they now pay and yet receive less just to underwrite those who don't pay or choose not to pay. Even charity has a threshold, and certainly does not ask for self-denial. The Torah asks that we help others, but it tells us that a healthy and capable person is only helped when that person makes an equal effort to help himself. Not all who make claims fall into the category of the destitute.

There are specific solutions to every problem that has been posed regarding American health care if one simply would be willing to listen to them. However, the President and many of the liberal clergy are not seeking to solve specific problems but, instead, wish to create a "grand plan" whose purpose is to engineer society with paradigms that fit into their own pre-conceived utopian vision. This Euro-style plan verifies them, giving them bragging rights abroad that we, too, are a society of "social justice." But national health control is neither just nor moral -- it is socialism.

Truth be told, the President and many of the liberal clergy are moved and animated by socialism and collectivism. Their political outlook precedes their religion: liberalism comes first and is the lens through which morality and the Bible are interpreted. But socialism is a political category, not a moral category. Socialists have no monopoly on compassion and concern for the poor, just a history of failed remedies and policies.

All too often, liberal theologians disregard the virtue the Bible assigns to hard work, personal responsibility, the priority and obligation to one's family and that one is entitled to enjoy the fruit of his labor. It is sinful to demand that people make sacrifices for those not even willing to undertake their own obligations. Such demands and sense of entitlement are a form of greed and robbery.

The Bible's strength lies not in platitudes but in its particulars that liberals ignore. The President and the liberal clergy also wish to ignore many of those details, including the Biblical guidance to prolong life and pursue medicine and healing. For them, details are not as romantic and dramatic as utopian visions and that which "reshape the world." The Old Testament understands societal obligations, but remains oriented to the individual and speaks to him.

More than anything this country has ever seen, President Obama's nationalized health care is the complete abrogation of the individual for the sake of collectivism. It outlaws self-determination. Further, it would deprive the individual the right to that greatest embodiment of liberty: the freedom to choose to live and to be healed. Deuteronomy boldly announced: "Proclaim Liberty throughout the Land". National health control would snuff out the land's liberty and replace it with tyranny and coercion.

What separates the Judeo-Christian outlook from other religions, what makes it unique, is its belief in Freedom of Conscience. This blessing will be removed by the President's plan since doctors will be forced to terminate life or withhold life-prolonging medicines and operations if they wish to keep their jobs as determined by a national board of health procedures. This is an arrogant plan, inhering power to an elitist few over the many. It is hubris on the part of our President, a very unreligious characteristic.

To this day, the plan is unclear and the President remains vague as to its specific contents. Rahm-care is being rammed and rushed through so that no one can fully be aware of what it really is. There is no transparency, which, itself, causes this whole sales pitch to be unethical. The Bible demands complete transparency when one wishes to sell an item to another or when one is advising another. Does it not say: "And ye shall not place a stumbling block in front of the blind man." In other words, it is unethical to do anything that trips-up and hides information from those putting their trust in you.

In synagogue on Rosh Hashanah, we ask God: "Who shall live, who shall die?" Such determination should be left to God, not to goverment-run bureaucratic panels, or Rahm Emanuel.