President Trump Will Continue to Prove the Experts Wrong: Here's Why

Arthur Schaper
|
Posted: Jul 30, 2018 12:01 AM
Share   Tweet
The opinions expressed by columnists are their own and do not necessarily represent the views of Townhall.com. 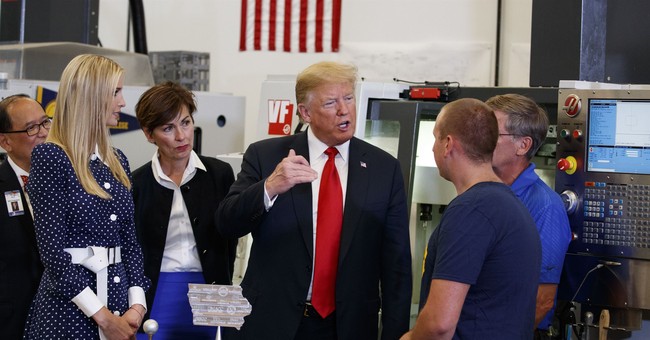 White House Press Secretary Sarah Sanders tweeted the following after Trump’s blockbuster announcement that the American economy was growing by 4.1% during the Second Quarter: “How many times will the ‘experts’ be proven wrong about President @realDonaldTrump until they finally acknowledge his policies are working?”

Her tweet was an epic shaming of many Trump adversaries. First, she quoted an article from nuisance-nemesis CNN, aka the Clinton News Network, Crappy Nitwits Network, etc. This immensely discredited the propaganda the cable “news” outlet sought to promote as the supposed truth-telling alternative to the lying President. They routinely interrupt the press secretary during press conferences, but to no avail. They shame the President, but they end up disparaging themselves. No one will forget Jim Acosta’s fake outrage over Trump not answering his questions—when there was no way the President could have ever heard him.

Next, the article which Sanders referred to reports on economists who claimed that there was “no way” for the economy to grow at 4.1% GDP. CNN’s article ignored the free market economists like Stuart Varney who predicted unparalleled growth under Trump. But the point is that CNN quotes intellectuals who were proven wrong, and decidedly so. To double-down on the shaming of the left-wing chattering classes, The Republican National Committee tweeted out a video sequence of economists who had mocked Trump’s predictions. From Paul Krugman to retiring President Barack Obama and never-to-be-President Hillary Clinton (plus arrogant businessman Mark Cuban), they all were certain that Trump’s economic policies would fail. They haven’t.

Sanders is right to write that word “expert” in quotation remarks, since it has become striking how stupid those so-called experts truly are, especially about President Trump, his agenda, and the success of his policies. How can they be so wrong? One could point out that these are liberal talking heads. They don’t want to give Trump any kind of credit since they oppose him politically. Austan Goolsbee is a failed comic who also served as Obama’s Chairman for the Council of Economic Advisers. Mark Cuban might be plotting a left-leaning 2020 presidential bid against Trump.

Beyond the partisan jousting, “experts” are often wrong on historical events, economic trends, and historical precedents. Harvard Professor Arthur Schlesinger Jr. believed that the Soviet Union would remain a lasting global adversary during the Cold War. Aside from free-market economists like Murray Rothbard, who had predicted the U.S.S.R.’s collapse, most intellectuals were convinced that Soviet Russia was here to stay.

Why do such smart, well-read people get it so wrong? Modern intellectuals are committed to equality of results. Their careers in academia depend on pushing this socialist ideal, or they would never get tenure. Liberals have also been taught—and their public intellectual successors teach-- that any movement or agenda which does not phase out worldwide conflicts (economic, cultural, political) is wrong and must be rejected at all costs. Therefore, any movement which promotes Making America Great Again must be resisted. (Check out conservative comic and commentator Evan Sayet’s incredible speech on “The Unified Field Theory of Liberalism”)

But there’s something else, more specific happening with the intellectual class’ reaction (or rather aversion) to President Trump and his administration. Not just liberal pundits but conservative (or at least supposedly conservative) intellectuals and commentators have been getting it wrong about President Trump ever since he announced his Presidential run. Charles Krauthammer, George Will, Jennifer Rubin, for example, frequently expressed their erudite, well-written versions of Trump Oppositional-Defiance Syndrome. Krauthammer acquiesced a little when Trump won, but Will and Rubin have succumbed to full-blown Trump Derangement Syndrome, along with neocon Bill Kristol of the Weekly Standard. They are even promoting the Democratic Party and hope for liberal victories in November to curb Trump.

Like many of their liberal colleagues, the conservative intellectual class, the so-called experts, live in Ivory Towers, gated communities, and press clubs. They don’t pay attention to the real world because they are insulated from it. Free market economist Friedrich Hayek derided these intellectuals as “secondhand dealers in ideas.” Dale Steinreich went further, labeling them “intellectuals of the ruling class.”

Just as academics cannot achieve tenure without bowing to the dictates of their academic superiors, so too the press secretariat for major national newspapers must remain spokesmen for the ruling elite, no matter which side of the aisle they stand on. Pro-worker, down-to-earth ideas receive derision but little traction from corporate owners.

Trump is not just enacting conservative reforms, he is undermining the ruling political class, both in the government and in the press. Press-and-print philosophers like Will and Rubin are not going to celebrate a chief executive who not only exposes their prognostications as ineffectual but now is bankrupting their bottom line. How else can one explain that Jennifer Rubin of the Washington Post has gone from being pro-life to warning the country that Supreme Court nominee Brett Kavanaugh must not be confirmed because he would overturn Roe v. Wade? Why would George Will (who writes for the same paper) demonize President Trump, when he has achieved and even exceeded Reagan’s record on economic growth, protections for the unborn, unprecedented domestic energy production, plus a list of foreign policy accomplishments of peace through strength?

Besides Will and Rubin, let’s include NeverTrumpers Jonah Goldberg and Jeff Jacoby, and center-right foreign policy wonks Max Boot and Niall Ferguson (along with left-wing pundits, of course). They aren’t going to embrace Trump any time soon. To do so would expose their expertise as irrelevant since Trump is winning while ignoring their advice. It would also cut off their meal ticket. They all work for Big Media, and they would be out of a job with their corporate employers if they wrote favorably about Trump.

The experts will continue to get Trump wrong, and no one should be surprised. Liberals hate him on principle. And the conservative “experts” don’t want to be exposed as feckless wonks more interested in filling their social calendars, selling books, and keeping their jobs with Big Media.