President Trump and AG Sessions: Do Your Job!

Arthur Schaper
|
Posted: Mar 17, 2018 12:01 AM
Share   Tweet
The opinions expressed by columnists are their own and do not necessarily represent the views of Townhall.com. 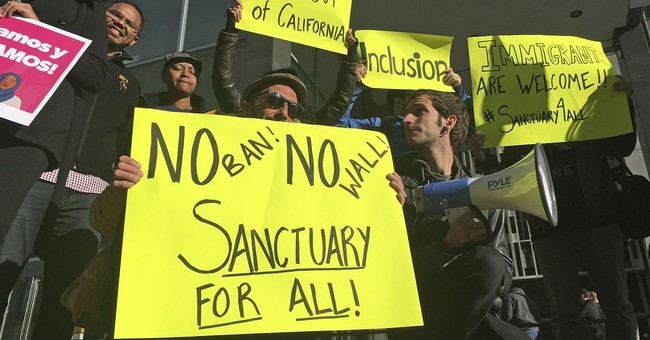 Tom Hanks has a sense of humor, and he’s not that bad an actor. One of my favorite lines from him comes from the movie “Turner and Hooch.” Playing a police officer solving a contentious murder mystery, he struggles to raise a slobbery bloodhound that really pushes his limits. At one point, he shouts: “What do you want me to do? Make you a margarita?” A statement laced with humor and frustration, that’s how I feel right now about the Trump Administration and their stunning tardiness on cracking down on California’s latest illegal alien lawlessness.

In his unprecedented speech to the California Peace Officers' Association, Attorney General Jeff Sessions announced a lawsuit against the state of California for rampant violation of federal immigration laws. He cited three specific statutes that his administration was targeting an array of sanctuary state laws which have barred local and state law enforcement from sharing critical information about illegal alien criminals under lock and key.

Hey, thanks Jeff. Really. But it’s not making enough of a difference right now.

First of all, Libby Schaaf, the corrupt mayor of Oakland who cares more about coddling criminals than protecting law-abiding, taxpaying citizens, has doubled down and defended her obstruction of justice in informing a wide swatch of illegals in the Bay Area that ICE was coming. I am glad that he specifically called out Schaaf in front of the Sacramento area police officers association. “How dare you?”

But do we really expect these Democrats to care?

Jose Garcia-Zarate, the illegal alien who murdered—yes, murdered—Kate Steinle, acquitted by a jury of left-wing Millennials and Western guilt-tripped technocrats, has filed a lawsuit against the federal government for “vindictive prosecution.” The audacity! Prosecution will tend toward vindictiveness, I suppose, when a criminal repeatedly breaks into our country, violates warrants, steals a firearm from a federal official, then murders an innocent American in broad daylight. It reminds me of a proverb: “Such is the way of an adulterous woman; she eateth, and wipeth her mouth, and saith, I have done no wickedness.” (Proverbs 30:20) Replace “adulterous woman with “illegal alien”, of course, although we could point to Libby Schaaf, who betrayed her oath and her constituents to protect criminals.

A lawsuit is nice, and a rousing speech is great, too, but their lawlessness has not ceased.

Not to be outdone by the corrupt mayor and the litigious illegal alien, California State Senate President Pro Tem (now Emeritus, but still a pain in the ass) Kevin De Leon—who is challenging Dianne Feinstein for US Senate—just appointed an illegal alien to a state commission. This illegal alien, Lizbeth Mateo, crowed about this appointment in two brazen, sickening tweets:

"In #lawschool I often wondered if I was fit to b in #lawjournal, #mootcourt bc not many ppl w/ my same background did. I always went for it bc even if I felt inadequate I thought I could add something of value. I hope to do the same w/ @StudentAidCommission. #undocumentedunafraid."

"Thank you Sen. @kdeleon for appointing me to the CalSOAP Advisory Committee. I look forward to working w/ the rest of the committee & the Student Aid Commission in such important task - increase the accessibility of postsecondary education opportunities for low-income students."

This is all immoral, unconstitutional, desperate nonsense. “Oh how sweet! Like at this young lady with a baby? She’s a hard-working immigrant taking a job that no American would take.”

Here’s all that really matters: Lizzy broke into this country, stole an education from American students using our taxpayer dollars, and is now a lawyer. An illegal legal? Yes, that now exists in California. This is not the first illegal legal, either: Sergio Garcia actually filed a lawsuit which went all the way to the California State Supreme Court. Following their ruling, illegal alien Garcia was able to apply for a professional law license. How exactly can an illegal alien dispense legal advice? The best advice for him to give would be to himself, and to leave the country.

And of course, who can forget the two illegal aliens—Julian Zatarain and Francisco Medina—who are sitting on two city commissions to this day in Huntington Park, CA? For nearly two years, We the People Rising and other local activist groups pounded the Huntington Park city council. We filed complaints with the LA County District Attorney’s Office, the FBI, and the US Attorney’s Office, California Central Division. When Trump came into office, we trusted that enforcement would be the rule, not the exception.

Yes, ICE raided the Bicycle Gardens Casino and has rounded up hundreds of California’s illegal aliens. Yet fellow residents still ask me when ICE will sweep their cities. “Where is ICE?” asked seasoned pro-enforcement activist Lupe Moreno asked earlier this year in the heart of Santa Ana, the same city where Congressman Lou Correa attempted to host an illegal alien town hall teaching illegals how to circumvent our immigration laws.

President Trump, what do you want me to do? Make you a margarita? Lawsuits are nice; cutting federal grant funding to outlaw cities is nice, too. We need arrests. We need perp walks. We need enforcement of the law.

I refuse to settle for “To Hell With California.” California is already a hell-hole of missed deadlines, bad priorities, and left-wing inanity. But it does not have to stay that way. You need to do your job, President and Attorney General!