Arthur Schaper
|
Posted: May 27, 2017 12:01 AM
Share   Tweet
The opinions expressed by columnists are their own and do not necessarily represent the views of Townhall.com. 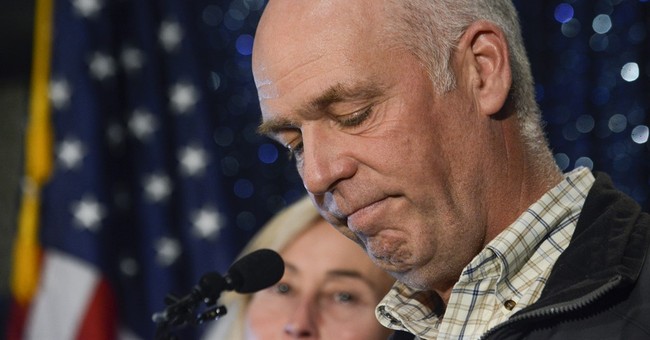 There is nothing like watching your worst enemies go down for the count … again and again.

And again. Gianforte’s gigantic victory was heart-warming and invigorating.

But honestly, I was worried about the Big Sky State’s special election for the at-large seat, since the Democratic-Republican rumblings in this state are more diverse than most people realize. Since 2006, Two Democratic US Senators represented this rural, conservative-leaning state. Who can forget Max Baucus, who had unwisely announced that Obamacare was turning into a “trainwreck” heading right toward the American people? Baucus played the right cards throughout his overextended tenure, but with that Obamacare vote, he knew his days were numbered. Obama appointed Mad Max as Ambassador to China. Democratic governor Steve Bullock appointed military veteran Joe Walsh to the US Senate. Anyone could see that the Democratic Party was looking for any way possible to hold onto this long-held Democratic seat. Walsh turned out to be a plagiarizer, and thus a left-wing ding-bat state senate candidate jumped into the US Senate race.

Republican Steve Daines, the at-large Congressman at the time, won the seat in 2014. Since then, the future has brightened for Montana Republicans, even though Governor Bullock ended up winning re-election anyway. Can someone please tell me how this happens in this red state, which has only gotten redder over the last eight years? Perhaps it’s the third-party spoilers, or the archaic campaign finance laws. Who knows?

Anyway, to many political operatives throughout the country, Montana’s special election (Ryan Zinke was confirmed as Secretary of the Interior! Dogs may roam in national parks!) was no slam dunk. To the Republicans’ clear advantage, they relied on the seasoned incumbent candidate Greg Gianforte. A multimillionaire businessman from New Jersey (take that, Chris Christie!), he had the money and the support, and he had run for Governor against Bullock last year, coming short of the victory. Campaigning a second time gave him an advantage; Gianforte was polling well within days of the seat opening. Still, the MT GOP warned that intra-party fighting could inadvertently throw the House seat into Democratic hands. For the tumultuous times we live in, a seat flipping into Democrat hands would add momentum to the desperate Democratic Party looking for any kind of hope, opportunity and win.

Gianforte ran a strong campaign. He was polling in the double-digits at one time. Reports exposed that the Democratic challenger, a progressive cowboy with a penchant for nudism and bad singing, and a staunch defender of Obamacare, was facing more headwind than expected. The race got closer and closer. Then came the day before Election Day, and the embattled Republican “body-slammed” a UK Guardian reporter. Then new reports indicated that he was trying to stop the Fake News freak from getting in his face. He tried to take the phone away, and they tumbled to the ground. More Fake News erupted all over the Internet. I couldn’t believe I was reading “Montana” and “Gianforte” all over the Twitter trending columns. Three major newspapers pulled their endorsement. I was getting really worried. But a good ending prevailed, and Gianforte won by six points—and in 2018, he will win again.

There are takeaways from this race, to ensure more opportunities for Trump and Republican candidates.

1. This race was all but decided at least two or three weeks prior, since Montana residents had been voting by mail. Republicans fighting to hold onto special election seats in South Carolina and Georgia would do well to focus on strong vote-by-mail campaigns.

2. The Incredible Shrinking Marginalized media is doubling-down on their blind hatred of President Trump and the Republicans in Washington DC. The earned media is still good media for Republicans.

3. Losing is become the new “winning” for The Democrats, and that’s real winning for the GOP and the country. Savvy politicos here in California and throughout the country are convinced that history will repeat itself in the 2018 off-year election. How quickly they forget that Election 2016 was as unconventional as it gets. The Democratic Party is a limping communist front group, and the populist-Tea Party-Middle America-Real World wing of the Republican Party is taking over. Expect Republicans to gain more seats, especially as Trump fulfills more of his promises and health care premiums start going down.

4. Close election victories are good for Republicans, since they keep them accountable, active, and aware. Every elected official needs to feel the heat to see the light. They need to remember that voters, not nice feelings, political parties, and big money, get them elected. Knowing that every seat is a battleground fight will ensure that Republicans stick to their campaign promises to the American people.

5. The demoralization of the Democratic Party is just plain awesome! Yes, I had to write that again.

6. The media are losing power. Endorsements? No endorsements? Republicans with principles will travel to victory. We can only savor how the media feel seeing their liberal agenda crashing and burning.

7. Republicans have fewer reasons to worry about making mistakes. Presidential candidate Donald Trump was a cascade of crazy ideas, vulgar statements, and unfiltered campaigning. Everyone jumped on him: Republicans, Democrats, the press, the Big Business phalanx, labor unions. They couldn’t stop him. Newsflash to Republican candidates: Did you lose your temper and shout at somebody? No biggie. Wait it out a few days. The rest of the media—alternative and conservative—will find out that the lying liberal press was just stretching the truth … again.

Republicans are shutting down Democratic hopes all over the country. Gianforte’s victory is a bigger win than most realize, no matter how much the press claims it's not. The Democratic candidate did better than Hillary did, but he lost - and that’s the point. Let’s hope that Republicans keep these principles in mind for Georgia’s 6th District as well as South Carolina’s 5th District. With the dismal record the Democrats have racked up already, we should expect more handwringing and declining liberal influence for Election 2018.