Hello Congress: What Part of "Repeal" Do You Not Understand?

Arthur Schaper
|
Posted: Mar 11, 2017 12:01 AM
Share   Tweet
The opinions expressed by columnists are their own and do not necessarily represent the views of Townhall.com. 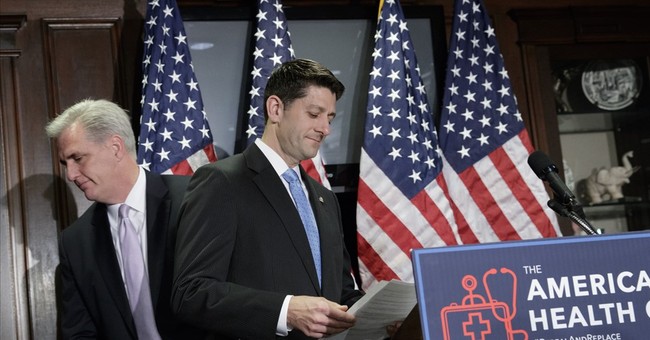 Legislative politics is tough. On one hand, lawmakers must cobble together a simple majority to pass legislation. As rules currently stand, legislation needs 60 votes in the United States Senate to pass.

Republicans (liberal and conservative) along with Democrats will not support the latest Obamacare replacement proposal. The American people were crystal clear about their demands.

We want a full and unrequited repeal.

Congress should submit a Repeal Everything Obamacare Act?—ROA? How about calling the legislation Destroy Obamacare Act—DOA? There’s so much fun to be had. After all, Republicans did not come to power with a Republican President just to sit back and get rolled by Democrats again, did they?

Hold on a second … The Congressional Republicans already submitted a full repeal in 2015, did they not? Well, it was pretty close … The Obamacare repeal of 2015 (The AOR Act—Almost Obamacare Repeal) still allowed adults to stay on their parents’ health care plans until they reach 26 years old. They law also forbade insurance companies from discriminating against patients with pre-existing conditions.

They could reintroduce that bill. Guess what?—The House Conservatives have done exactly that. Bravo! But even then, it’s not full repeal. Boys and girls, when you hit that magic age of 18, you are an adult. Why would you want to stay stuck on Mommy’s plan? Besides, that increased burden on insurance companies is part of healthcare’s rising costs.

As for pre-existing conditions … cancer, diabetes, and asthma are on the rise. Why? People are living longer—good thing. People are not living healthier—bad thing. How about incentives for preventative care? Type II diabetes is yours and my fault, not a pre-existing condition based on genetics. Senator Paul’s wants repeal of government regulations to allow co-ops among individual, which would pool risk and costs—I like that.

Again, the magic word is “repeal”—get rid of rules, regulations, laws and liabilities.

Let’s treat health insurance like car insurance—if you have to have it at all. Yes, this is an oft-repeated plea. How about creating cut out drivers’ licenses but with a Caduceus on the cover? I drive reasonably well in traffic hell-hole Los Angeles County. Every year I avoid an accident, I pay a lower premium. How cool is that? Imagine young men and women who choose to care for themselves—eat right, exercise appropriately, and give up high-risk behaviors—and then guess what? Their health care premiums decrease!

But no … House Speaker Paul Ryan has rolled out a plan to “replace” (fix, bandage?) Obamacare.

Great. This is a key part of repeal.

If competition is restored among insurance companies and across state lines, this breakthrough will organically force costs down. Full repeal needed.

Repeal government takings and let me save money. OK, but we need more. Full repeal, please.

Nope. Cut the adult-welfare umbilical cord, Congress, and cut the crap. Full repeal. There are too many able-bodied single adults on Medicare, Medicaid, Medi-Theft from the Young to Cover the Old.

Why is the government imposing ratios on insurance companies in the first place? Repeal all government interventions. Got it?

The cost of health care/health insurance is too damn high because the Government is Too Damn Big. (Hat Tip, Jerry McMillan). #RyanCare is more government pretending to care, but it’s really politicians caring about their jobs. Daniel Horowitz posts 20 brilliant proposals for health care—let’s try those.

But the in the meantime, repeal the whole damn Obamacare monstrosity, and let the free market make us healthy. I learned from my own political training: do not to settle for less. Don’t appoint me to a committee where we discuss the meaning of “repeal”. Just repeal the whole deal. When I said “Repeal”, I meant it. When the American people double-down and demand repeal, they meant it.  What part of repeal do you not understand, Congressmen?!

The same message goes to President Trump. He backed away from single-payer talk. OK, great, but it’s not the government’s job to ensure everyone is taken care of. That simply revives the road to serfdom one again.

Don’t just repeal Obamacare, but repeal all the stupid rules pushed by government and corporate interests to enrich themselves while impoverishing everyone else. And about more policy-oriented discussions …

Let’s repeal the nasty notion that health care is a “right” which the government must provide. It’s not working in Canada, the United Kingdom, or Sweden. Bernie Sanders is a spoiled regressive from Vermont. He should try getting health care in Canada, where he can pull a number of hope that he wins a locale’s once-a-month lottery to see a family doctor. The animals get better care than human beings.

Arbitrary caps on medical students, guild-system quotas on medical professionals, and arbitrary licensure laws are not helping. The government that wants to keep us healthy is making us sicker.

Get rid of it.

There’s a theme to these suggestions, along with scrapping Obamacare entirely.

I agree with US Senator Tom Cotton. Congress, do you job—REPEAL!