Right-To-Work Reaches 27 States: Why It Matters

Arthur Schaper
|
Posted: Jan 12, 2017 12:01 AM
Share   Tweet
The opinions expressed by columnists are their own and do not necessarily represent the views of Townhall.com. 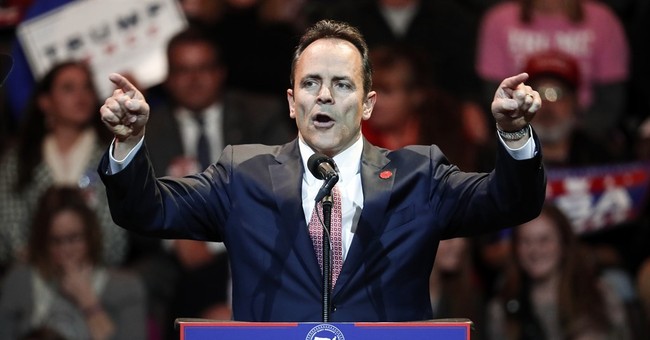 The battle lines have been drawn in Washington, D.C. President-Elect Donald Trump will be President-Inaugurated in a week and a half. Mexican cement companies have already offered bid to help build the Big, Beautiful Wall (with or without a door?). The U.S. Senate Republicans already voted to repeal Obamacare. So happy! Now they have to agree on one plan.

U.S. Senator Jeff Sessions is sparring with his colleagues as the next Attorney General designate, one who will uphold the rule of law rather than pursue political agenda at the expense of moral authority. ExxonMobil oil magnate Rex Tillerson is on his way to become the next Secretary of State, with the courage to call out the foreign policy fecklessness of the previous administration. The desperation of demoralized Democrats, doubling-down on their stupidity, should warm Republican hearts and political fortunes chances heading into 2018.

But there’s bigger news happening in one state, which means good news for all 50. A fairly well-known conservative reform was gaining notoriety and headlines. Because the #FakeNews outlets are busying themselves with Donald Trump’s latest tweets or all the hoopla about Russia, we haven’t heard too much about it. Or maybe because the liberal media doesn’t want to admit that the blue wall of Democratic dominance is taking on another breach.

In Kentucky, Governor Matt Bevin (only the 4th Republican governor in the last 100 years) just signed into law right-to-work (RTW) legislation, which makes the Bluegrass State the 27th  RTW state. Yes, this labor reform has been on the upswing the last six years. It’s become fairly predictable to determine which state will enact the policy next, since an average of one state per year has this adopted pro-liberty, pro-free market, pro-worker, pro-good government policy.

So, who cares about RTW State #27, and why should it be headline news, especially for the freedom fighters in our midst and across the country?

1. The rapidity of the passage of this reform. Within a week of Kentucky’s 2017 legislative session opening (with GOP legislative majorities for the first time in 90 years), Governor Bevin signed off on this law. No time wasted. Michigan Governor Rick Snyder signed off on RTW during the lame duck session for year 2012. Wisconsin Governor Scott Walker didn’t go after it until his second term began in 2015.

2. The sweeping nature of the reforms. Governor Bevin and his Republican legislative colleagues went big. Not just RTW, but Bevin approved paycheck protection, which means that employees must opt in to have their union dues deducted instead of opting out. They also repealed “prevailing wages” laws, which will make contract bidding more efficient and less costly to Kentucky taxpayers.

3. The boldness to enact these comprehensive reforms.  Not even six years ago, Indiana Governor Mitch Daniels and other Republican governors in the Rust Belt played coy about Right-to-Work. Snyder told the legislature early in the 2012 session that labor reforms were not on his agenda. Scott Walker convinced audiences during the 2012 recall that such legislation would never come to his desk. Fast forward now, and Kentucky (as well as Missouri and New Hampshire) Republicans campaigned on RTW in their respective bids for office.

3. Republican leaders are demonstrating sheer courage in the face of raging onslaughts. Labor union toughies took over the Kentucky state legislature just before the bill passed, and the Governor faced off against them personally. When’s the last time we ever saw a Republican leader stand up to massive hostile crowds and not cave? Besides Trump, not too many.

Now, why should the American people as a whole care?

4. This reform will unshackle individual liberty and opportunity throughout the country. In fact, Kentucky’s RTW victories began in 2014, when individual counties began declaring themselves “Freedom To Work” zones. Despite lawsuits which followed, regional and city governments which ended compulsory membership and forced dues for individual workers already enjoyed stronger economic growth. Despite a series of lawsuits to block this practice, the 6th Circuit Federal Court of Appeals has defended the practice.

This is good news for the other states in the region, including Ohio, which hit a brick wall after Ohio Governor John Kasich signed off on sweeping collective bargaining reforms, which exceeded Walker’s Act 10 legislation, and were stuck down following a massive union-backed initiative campaign the next year.

This development is now good news for everyone:

5. Democrats across the country are losing their most reliable source of revenue. Labor unions are the backbone and front wallet of the already decimated Democratic Party. For the last three decades (at least), Democrats have relied on the union phalanx for forced membership and dues to line their pockets, purchase politicians, who in turn pass laws protect their limited, anti-business, anti-taxpayer interests. Progressive, socialist elements run these unions (they are, after all, collectivist at their core), and they push climate alarmism, abortion, LGBT tyranny, gun control, and other anti-liberty measures. This reform will hammer one more nail in the Communist-Socialist-Democratic Party and its perverse agenda. And there’s nothing that the once all-powerful labor unions can do about it.

6. Republicans as a party, and Americans as a whole, have a golden opportunity to sweep out the last vestiges of the Obama Administration and the strait-jacket of Democratic dominance in otherwise untouchable states like Illinois (where the SEIU has more power than the state government itself), New York (where Mario Cuomo is doubling down on liberal lunacy, like forced minimum wage hikes), and even California, where the California Teachers Association decides what passes and what fails.

The end of forced unionism means a restoration of our individual voter franchise, where special interests are not overriding individual voters. It also means that state legislatures can tackle meaningful, long-term entitlement reforms, and restore funding to core functions of local government to the people.

It’s about freedom. It’s about choice, and it’s about time that more people appreciate what RTW is doing for this country.

The Salvation Army Has Gone Woke Too Now, and They're Losing Support
Townhall
Sam Stein says Wall Street Journal's claim that Biden has done no better than Trump regarding COVID 'lacks any real context'
Twitchy
Dance With the Guy Who Brung Ya: Democrat Freak-out Begins Over 2022
Redstate
Whose Land Did Native Americans Steal Before Europeans Stole It From Them?
PJ Media