Voting for the Rodeo Clown

Arthur Schaper
|
Posted: May 08, 2016 10:43 PM
Share   Tweet
The opinions expressed by columnists are their own and do not necessarily represent the views of Townhall.com. 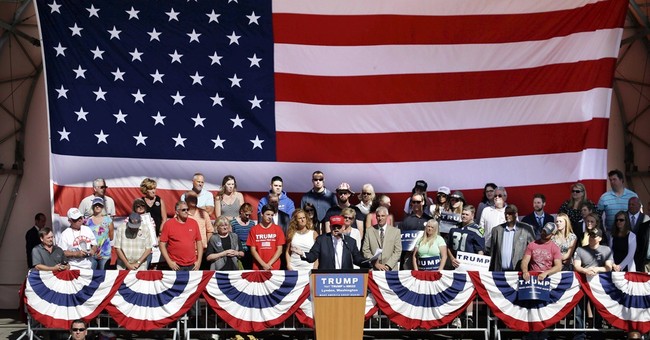 This is the strongest field of Republican candidates in 35 years. You could pick a dozen of them at random, and have the strongest cabinet America has had in a life-time. And instead, all our time is spent discussing this … rodeo clown.” – Charles Krauthammer

He flied and flopped all over the news.

He dominated the airwaves like a drunken sea captain.

He took over the polls like a possessed mountaineer. He could say anything and get away with it, like Andy Kaufman’s made-up alter ego lounge-singer Tony Clifton.

And yet even those comparisons don’t quite cut it.

He took down one opponent after another, and spent more time wowing crowds instead of crowing about his victories.

He played the media game better than Obama. This old, white New England liberal carried the Winner Take All states like a winner.

$2 billion in free advertising. How right the talking heads were. They kept talking about Donald Trump.

And now everyone will be voting for or against him in the months to come.

He said anything he wanted to, including what many of us were thinking.

And yet, so many people did not consider him a thinking man, or even worth thinking about.

The Washington Post’s own Charles Krauthammer dismissed him as a “rodeo clown.”

And now he’s got the show all sewed up in his favor.

I am saddened that Ted Cruz has suspended his campaign. But hey -- If Evangelical Indiana says “No!” to you, then it’s time to move on: Senate Majority Whip, Leader? I would love to see Cruz as another Associate then Supreme Court Chief Justice. Sure, there are still states in play for Election 2016. There are still delegates to win, and those pledged delegates will vote not just on their assigned nominee, but the process and the platforms to follow. I am still voting for Ted Cruz in the California primary. I hope that lots of Republicans turn out in the Golden State, even if they felt that their golden opportunity to matter in the Presidential primary has been tarnished for good.

In a sense, Donald Trump has been a gift for this country (with many thanks to Nerdwriter on this analysis).

He has exploited the media-hyped hypocrisy of objectivity. They can’t pretend to be integrated or principled. They just want ratings, money, and they chased the hottest item rather than the wisest.

He has also proven the power of right-wing as well as left-wing media to create a candidate. Look at all the news site from conservative think tanks as well as the liberal mainstream media, too. Even if the radio talk show hosts hated Donald Trump, we learned why, and expected our state and local candidates to promote those values.

Donald Trump forced the media to cover him. They need the ratings, especially since their stock prices and influence are falling rapidly.

In the meantime, hasn’t anyone noticed that the state legislatures are getting stronger by the minute? Washington politburo political bureaucracies are cratering under their own waste and weight. Now we’re paying attention. Haven’t we had enough of DC discontinuing our liberty? Our rights of self-determination, of life, liberty, and the pursuit of happiness? Washington is finally functional, because of lawmakers dysfunction. Speaker of the House John Boehner showed his true colors (besides his Oompa-Loompa tan) at Barack Obama’s last White House Correspondents’ Dinner.

Now, one of them has been forced out, and the other will be leaving in less than one year.

Donald Trump made fun of this friendship, and the collusion up and down K Street in Washington.

Populism is that … populism. Sure, it lacks intellectual underpinnings. The last thing that this country needs, however, is another probing debate on policy. We need our guys to win. We need them to take the reins of power and corral our country to its fundamental principles.

Can Donald Trump really do that? We can hope.

I do know that he is a better alternative to Hillary CIinton, a political hack whom even the most ardent of Democrats cannot stand, along with the awakening public. Do we really want another Clinton in the White House?

So, the Republican Party has a rodeo clown at the top of the ticket.

That’s not a bad role for him to play.

After all, Donald Trump is entertaining and colorful. Even I found his “Rosie O’Donnell” joke funny.

A rodeo clown has a few responsibilities. His chief act is to run around a lot, distracting wild animals from goring the bull-riders. He also has to make people laugh. If the rodeo clown gets hit or hurt, it’s not a big deal. In fact, near-fatal accidents can work to everyone’s advantage, and become part of the show.

God knows, the conservative movement is quietly taking back our streets, cities, and our statehouses. We need the media going after a target which in turn targets them. Andrea Mitchell basically read her own obituary with a news crawl asking the question about the Trump ascendancy: “How could the media miss this?”

The economy is not getting better fast enough, but for those who are willing to learn, to adapt, and adopt new skills to face the challenges, Donald Trump’s wild general election romp will give them something to look forward to. He has bad polling numbers. So does Hillary Clinton, and I imagine they are about to get worse. She is a lot less entertaining, too, and widely despised.

Republicans are divided? Democrats are dividing. Notice the present progressive tense (pun intended). Bernie Sanders is dragging down Clinton’s second bid for the White House, kicking and screaming. Unlike four years ago, the Republican nominee presumptive is attacking her! Who is taking advantage of this Democratic divide? The Rodeo Clown!

This tweet tosses the lasso around Crooked Hillary and Goofy Elizabeth Warren.

Finally, the Republican top of the ticket fights the left, not the base.

I say “Giddyup!” I am voting for the rodeo clown!