The Democratic Party: May the Farce Be With You 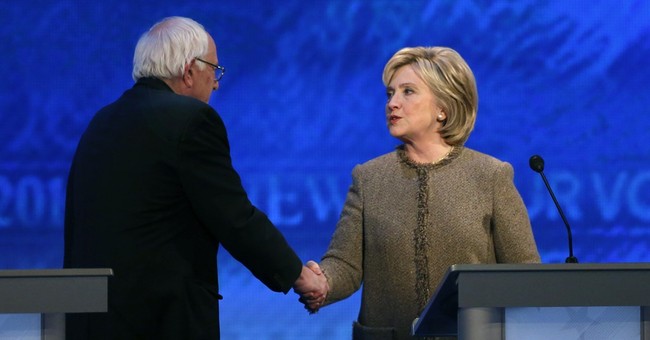 As a kid, I collected MAD Magazines. Besides the weird covers with Alfred E. Neuman’s gap-toothed naïve grin and the Spy v. Spy cartoons, one of my favorite strips was called “Good News, Bad News, Good News.” One of the most memorable strips went like this: “GOOD News: you are watching you favorite sitcom. Bad News: A special report from the President interrupts. Good News: You get twice the laughs.” That’s how I felt watching the latest Democratic Party Presidential debate after watching the Fifth Republican debate.

Good News: Regarding the Fifth GOP Debate, Ted Cruz had the best night, and Donald Trump is losing in Iowa. Hopefully, Cruz can gain momentum in South Carolina and Nevada, since New Hampshire tends to shy away from social conservatives. I have heard nothing but good news from the Republicans, at least those who talk about enforcing the rule of law, with a credible walk to make it happen. For the most part, I stopped watching the Republican debates in earnest. I am impressed with this cadre (not clown car) of candidates. More reasons to say Good News: Jeb is dying, Kasich is frying, and the rest of the candidates are trying and winning. At this point, I could even vote for Donald Trump. Of course I care about my party’s pick in 2016. I just know the candidates whom I want, and I have heard all the talk.

Now for the Bad News: Democrats are still running for President (but fewer of them, including RINO Lindsey Graham, who thankfully dropped out). They are not just promoting but extending President Obama’s Big Government, anti-American agenda. They are doubling down on the same illiberal lunacy which has dragged this country backwards while the rest of the developed (and developing) world has embraced center-right governments and free market economics.

Good News: Listening to the Democrats actually debate one another, and trip over reality with their fantasy positions, nothing could be funnier or encouraging. I got twice the laughs, and I was not laughing with those three sick self-sycophants. How can anyone describe the three remaining Democratic presidential candidates? A nonentity who plays the guitar, plus a more dangerous, socialist form of Fred and Ethel Mertz arguing who will give more of other people’s money to those unwilling to work or contribute. Nyuck Nyuck Nyuck! Another Al Jaffe fold-up could expose these three Dems: collapsing.

Their opening statements were all kinds of funny. To hear these anti-capitalist cronies rail against Wall Street and the stagnant economy, how can you not laugh? Have they missed the fact that their President has created this massive inequality in the country? Bernie Sanders apologized to Hillary Clinton on behalf of his staff, who breached her campaign data. Bermie said “Sorry”, and yet Hillary can’t say anything about the four dead diplomats in Benghazi, the thousands of classified emails on a private server, her husband’s spate of peccadillos, or her former supervisor’s failures. I repeat: how can you not laugh at the irony?

Yes, of course, the NRA is the source of all evils in the world. To their credit (and my surprise), the moderators pushed back against the hollow talking points – Bam! Bam! – More people are buying guns, including women! So, the Democratic Party is losing the pro-gun vote? Great. They have already shot their chances full of holes rallying around a family name with more dubious distinctions than an Omnibus bill. Are all those law-abiding Americans wrong for wanting to protect themselves? The Progressive Left has gotten so lazy, both intellectually as well as politically. “Tax more, spend more! Regulation will make us richer!” I almost expected them to stay “Ignorance is Intelligence” and “War is Peace.” Watch out for the boot in your face forever.

Martin O’Malley outright lied when he claimed that his administration helped passed sensible gun laws. Uh, then why in 2014 did thousands of protesting Marylanders rally to the steps of the state capitol, protesting those gun grabbing attempts? How come a wide array of Old Liners vote in a real Republican who expanded the Second Amendment, and no one cried about it?

Hillary took her time in the bathroom. Was she flushing away more emails? At the end, she tried desperately to appeal to the Millenials with “May the Force Be With You.” Sorry, Secretary. Many of “the young people” prefer Grandpa Bernie, and they hate Halloween costumes and free speech. So stop scaring them with your face.

The progressive Three Stooges debated the same slapstick stupidity, too. College is too expensive, yet not worth the paper money printed to pay for it. Climate change is the greatest threat facing us. Yet the last time anyone noticed, a shaft of light from the sun or a cold wind on a December weekend never killed anyone. Neither do guns. Those terrorists who shout “Allahu Akbar!” and collect bloody money from ISIS offshore accounts? Yeah, they kill people.

Forget “Good News. Bad News”. The Democratic debate turned into “May the Farce Be With you.” This is a joke. Isn’t the Democratic Party ashamed of itself? Deep in debt, cannot pay of their interest groups, they have nothing left for President besides three old white frauds. The Democracy has lost a vast majority of the governor’s seats (Jon Bel Edward’s upset in Louisiana means nothing since the state is getting redder, and the GOP challenger had a bad past) and legislative seats across the country. The conservatives (the true Rebel Alliance) across the Magnificent Fifty are asserting not just announcing their principles. The liberal left has to depend on dying GOP Establishment figures like Mitch McConnell, who just got slammed again by my First Pick for President to enact their slow, degrading agenda. We are all paying attention this time. We the People are no longer helpless bystanders watching the federal government burn through our nation’s wealth with relentless fiat money printing.

Republicans going into 2016 can smile, shrug our shoulders, and say: “What, me worry?”