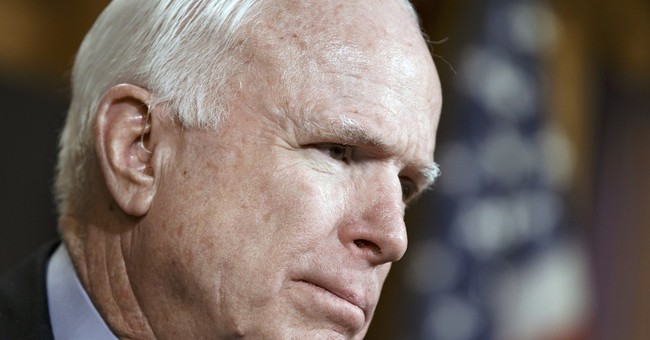 New polling indicates that Senior US Senator John McCain (R-AZ) is losing popularity with Arizona voters, who want a more conservative candidate representing them in Washington:

Five-term incumbent? No wonder McCain has gotten out of touch. Term limits are not the answer, other than responsive voters expecting responsible officials.

Arizona Republicans want a more conservative candidate, and only 37% of Arizonans in general approve of McCain.

Why ever would they think that?

Let's start with his litany of bipartisan liberalized legislation with progressives on an array of displaced issues.

He talks up climate alarmism, having draft legislation with retired Democrat turned Independent Joe Lieberman of Connecticut. He also coauthored the McCain-Feingold campaign finance "reform" legislation, which the US Supreme Court struck down in 2010 in Citizens United.

McCain also teamed up with now-deceased ultra-liberal Ted Kennedy on immigration "reform". He also voted against the Bush tax cuts in 2001 and 2003, then signed off on the Medicare Part D expansion which the country could not afford. On war issues, McCain has become a belligerent neocon who shames anyone disputing immediate investment of armed troops into the Middle East.

Let's not forget his stunningly stupid slur against US Senators Rand Paul and Ted Cruz, calling them "Wacko Birds". Although he later apologized, McCain has still shown himself to be more allied with big government, establishment interests at the expense of conservative movements around the country, including the Tea Party.

Conclusion: McCain has gone Washington for years, more interested in holding onto power rather than representing the best interests of the people who elected him.

Other reports earlier this year caught him purging Tea Party and conservative Republican critics from the central committees and endorsing bodies throughout Arizona, in another attempt to safeguard his reelection chances for 2016.

McCain's non-conformity to the conservative cause reared its ugly head before, when in 2010 he faced a primary challenge from a former Congressman and radio host. McCain quickly changed his tune and shouted: "Build the dang fence!" Three years after his election, he signed off on the Obamacare of immigration bills, failing to reach the 70 votes threshold they had initially promised.

McCain gets jittery around election time, and veers right to dampen a primary fight, or at least curry enough favor to survive the primary and float into reelection.

In 2015, with a more relentless media exposing his back-handed deals with Democratic elements in the US Senate, plus the recent purge of Arizona GOP committee groups from key leadership positions, it has become very clear that McCain represents his own ambitions, no longer the best interests of his state.

McCain will face a tougher fight going into 2016, and with more conservatives angry at Washington Republicans trying to keep the status quo rather than change the culture of the upper chamber, the same voters who held their noses for him in 2010 will be giving him the thumbs down the next go around.

A deeper question arises from the McCain dilemma: How can voters ensure that US Senators remain connected and competent?

The Federalist Papers may assist us. Madison wrote in Federalist 62 that the US Senate would provide a check on federal authority against the states:

It is recommended by the double advantage of favoring a select appointment, and of giving to the State governments such an agency in the formation of the federal government as must secure the authority of the former, and may form a convenient link between the two systems.

In Federalist 63, Madison charged that the US Senate projected an aura of national stability before member nations in the world:

A fifth desideratum, illustrating the utility of a senate, is the want of a due sense of national character.

US Senators were never supposed to respond to popular interest, but the states. This process changed with the Seventeenth Amendment, prodded along by progressives seeking to empower the popular vote, yet inadvertently diminished individual influence as well as state sovereignty. The popular electorate in general does not have the time or resources to pay attention and force their senior representatives to focus on their proper duties and represent the best interests of their state.

Conservative news analyst Bill Whittle has suggested it, former Governor Rick Perry briefly campaigned on it, and even left-wing Mother Jones talked about the movement: repeal the Seventeenth Amendment, and give back the US Senate to the states, not to the people.

Does the Constitution require this amendment repeal in order to bring the US Senators back in line with respecting the enumerated powers of the US Constitution, and limiting the spread of the federal leviathan into the daily business of the states and the people?

Based on the recent attempts to unseat liberal-leaning Republicans like Lindsey Graham in 2014, following the statewide rebuke from his own party, it appears necessary to reinvigorate the power of state legislatures against Washington.

Conservatives could take advantage of repeal. In 2015, Republicans control 70% of the state legislatures, who would appoint US Senators reflecting their numbers, and their values. Rather than direct election and all its adverse idiosyncrasies, today there would be a marked supermajority of Republican US Senators in the upper chamber, ready to override a number of Obama's unjust and unsound vetoes.

Ironically, by removing the power of the American People to elect their US Senators, repeal of the 17th Amendment would inadvertently enhance the power of the states and the people against Washington, including a rogue Democratic President bent on his own agenda at the expense of the country and the US Constitution.

It would also force US Senators like John McCain to uphold the Constitution as well as their commitments to their constituents.