Insularity or Innovation: The Precarious Future of HBCUs

Armstrong Williams
|
Posted: Aug 15, 2019 12:01 AM
Share   Tweet
The opinions expressed by columnists are their own and do not necessarily represent the views of Townhall.com. 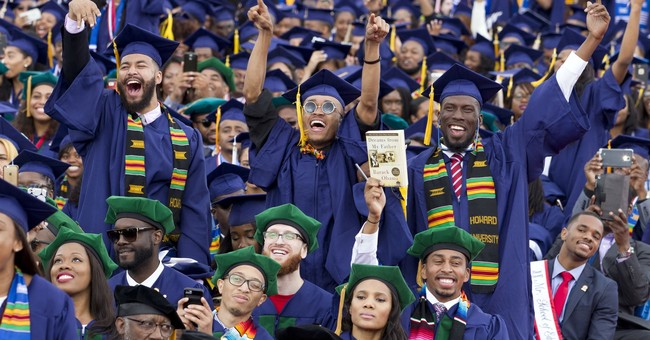 It has been an open secret for several decades that the writing is on the wall for most historically black colleges and universities. Since 1989, eight HBCUs have closed because of lost accreditation or bankruptcy. The reasons are myriad, but principally because HBCUs no longer command a monopoly on attendees created by de jure segregation. For the past half-century, HBCUs have had to compete for students among mainstream public and private institutions, as well as for-profit educational institutions.

But the changing market dynamics do not tell the entire story, especially because some HBCUs such as Howard University, Morehouse College, and Fisk University continue to thrive in a competitive landscape.

As a graduate of South Carolina State University in the early 1980s, I can attest to the quality of the education available there. Although I came of age when many colleges and universities in the South had begun to accept black students, many of us attended traditionally black colleges because there were ready pathways through those institutions to attain specific, job-related skills and gain entée to jobs in corporate America or to graduate programs at Ivy League universities.

But over the ensuing years, enrollment at South Carolina State has declined, meaning it receives a smaller share of federal government support and, critically, a smaller share of support from private philanthropists, such as the scholarship I've endowed in my mother's name to support training for future media professionals. South Carolina State is a success story in that it retains a competitive advantage in preparing black students to enter the media field — a field in which blacks, especially at the ownership level, remain woefully underrepresented.

But my experience is unique in some ways. Several of my close friends — notably, successful entrepreneurs Logan Delaney, who served as a board member of Saint Augustine's University, and ambassador Harold Doley, who served on the board of Shaw University (both in Raleigh, North Carolina) — saw the writing on the wall but were unable to change a culture of institutional insularity that tends to permeate the leadership of some HBCUs.

These college leaders insisted on living in the segregated past. Notably, this meant that administrators, teachers, and trustees were more focused on preserving their prestigious positions within the local black community than on finding a strategy to compete in an integrated marketplace for students and philanthropic support. Some of their board members attempted to persuade administrators to consider merging with other institutions, marketing themselves to students of other races and creating specialized offerings (in information technology, for example) tailored to the local economy. But the administrators wouldn't hear of it.

As it stands, few HBCUs have a viable strategy for competing for students and philanthropic money in an integrated world. Lacking a strategic vision for increasing tuition revenue and a strategy for enhancing philanthropic support, most HBCUs focus instead on trying to compete for a dwindling pool of government funding. But almost all forms of government money have strings attached. While such liquidity in the short term can be beneficial, reliance on government grants creates long-term obligations that often are difficult or impossible to fulfill in the absence of independent sources of funding.

Sadly, Saint Augustine's chose to pursue government-matching grants that required the college to raise an equal amount of private funds. Lacking a sustainable alternative fundraising source, Saint Augustine's soon defaulted on the government contract, and the feds asked for their money back.

In the absence of broad alumni and philanthropic support, and failing to qualify for government funds, many HBCUs find themselves stuck in a slow death spiral of declining enrollment and declining quality of product. How can they turn this around?

The solution is to realize that educational institutions are essentially businesses that exist to serve a market demand: producing workers with marketable skills. Of course, they also serve a broader function as repositories of knowledge, history, and culture. But they cannot fulfill the latter if they do not take care of the former. Firstly, HBCUs must compete for philanthropic dollars by justifying the return on philanthropic investment.

Global philanthropy has undergone a significant transformation in recent years from a staid, somewhat collegial world of planned gifts to a competitive environment in which donors want to see a measurable social impact from their philanthropic efforts.

The keyword here is "measurable." It is one thing to talk up the wonderful history and legacy of a historic institution but quite another to track and quantify the results it produces. How many students who enroll actually graduate within five years? How many obtain jobs within six months of graduation? What is the average salary of a graduate, by academic major? What is the cost-per-graduate to produce these outcomes? What percentage of the alumni base gives back to the institution?

Without transparent, quantifiable answers to these questions, it is often difficult for mission-driven philanthropic organizations to justify making large donations to HBCUs. The sad thing is it would not take much for HBCUs to actually develop the administrative infrastructure to track these dynamics. In fact, they do not have to do it alone.

With their similarities in student profile and funding base, HBCUs should be in an advantageous position to create a shared administrative infrastructure. Ostensibly, organizations such as the United Negro College Fund should foster innovation and efficiency among their member schools. But sadly, it, too, has succumbed to the siren song of insular elites, who soon will go the way of the chiefs of the Bantustans in post-apartheid South Africa.

The UNCF presently has several hundred million dollars in unrestricted funds that belong to the schools, but the organization — which pays its CEO over $2 million in salary — refuses to release these funds to its constituent colleges and universities. The 60,000 students of these institutions of higher education are owed this money.