Here’s What a Modern Political Witch Hunt Looks Like

Armstrong Williams
|
Posted: Mar 14, 2018 10:15 AM
Share   Tweet
The opinions expressed by columnists are their own and do not necessarily represent the views of Townhall.com. 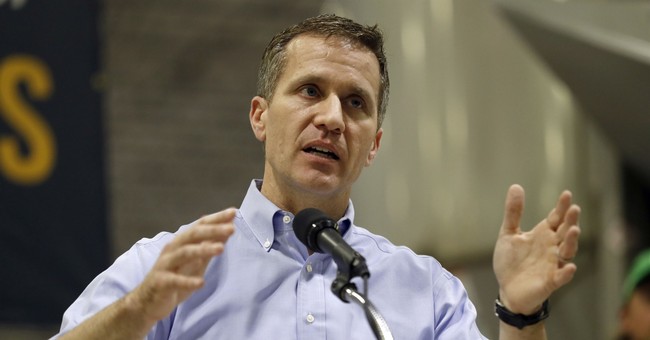 Want to see a witch hunt?

You don’t have to go back to the 1600s and Salem, Massachusetts. Just look at what’s happening to Republican Governor Eric Greitens in the state of Missouri in 2018.

A Democrat prosecutor in St. Louis, Kim Gardner, has indicted the sitting Republican Governor. It’s an astonishing case—and an abuse of the legal system unlike anything we’ve seen in recent memory.

Here’s what we know: The prosecutor admitted in court that she brought the indictment without the evidence to win the case. In fact, in open court, she had to beg and plead with the judge for more time to gather the facts. Conveniently for Democrats in Missouri, her idea of more time was a trial date just before the mid-term elections in November. That, of course, helps her and her fellow Democrats continue to take shots at the Governor, the most popular conservative figure in Missouri in a generation.

I’ve known this Governor for over a dozen years. When I was a Commissioner for the White House Fellowship program, his application came across our desks. And he was a slam-dunk candidate. He was a Navy SEAL, with a Rhodes Scholar’s mind and a boxer’s toughness—and a compassionate heart. He had worked with refugee and orphan children around the world as a humanitarian. We awarded him the White House Fellowship, and he was then, and remains now, one of the most impressive alumni of that program I’d ever come across.

When he ran for Governor on a strong, conservative platform—emphasizing his commitment to veterans, his belief in small businesses, and, in a state that was still reeling from the riots in Ferguson, his steadfast support of law enforcement—those who knew him were sure he’d win. And he did. The people of Missouri wanted a strong outsider, and that’s what they got.

And in the last year, he’s governed as you’d expect a Navy SEAL to govern: he’s gotten things done, made a few enemies along the way, but managed to pursue a conservative agenda of bringing back American jobs, lowering taxes, and keeping the people of Missouri safe.

The problem for Democrats, of course, is that he’s been successful. A Republican Governor in America’s heartland is proving that conservative values and beliefs actually work. And in the same way that Democrats at the national level use any tool at their disposal to attack President Trump, so the Democrats in Missouri are using the legal system to come after Governor Greitens.

Here’s the fundamental issue: this case isn’t just an attack on a single conservative Governor. This is an attack on the very foundations of the American justice system. If we allow prosecutors to go after their political opponents using the legal system, then the law ceases to have any meaning, and politics ceases to have any fairness. One of the reasons that our Founders wrote the Constitution the way they did is because they wanted to eliminate the use of the law as a weapon to settle political scores or pursue personal animus.

If you want to see what happens when politics burrows its way into the legal system, take a look at authoritarian regimes and Communist dictatorships. There, your fate in the legal system is determined by how the leader feels about you that day; there may be a judge, maybe even a jury, but it’s all a show, a fiction, a set-up.

That is what Kim Gardner has brought to the city of St. Louis and the state of Missouri: a legal process that would make Kim Jong Un and Saddam Hussein proud. In a testament to just how much she’s borrowing from the authoritarian playbook, she’s even circumvented the police. Rather than use officers of law enforcement—men and women who swear oaths to uphold our Constitution—Kim Gardner paid a $10,000 retainer and $250 per hour to out-of-state private investigators to look into the Governor.

Here’s the part that would make her the envy of dictators around the world: in her contract with these private investigators, they are forbidden from writing any of their findings down. That’s right: All “evidence” they collect must be submitted to her orally, in person, hidden entirely from public view.

That is not how the justice system of the United States of America works. But Kim Gardner doesn’t care about justice. What she cares about is politics. How do we know? Because throughout this case, she has plastered herself all over the liberal media in Missouri, giving interview after interview and quote after quote about this case. It’s her fifteen minutes of fame—a chance to go from unknown prosecutor to state-wide celebrity. And like other liberal politicians who use politics to become celebrities, Kim Gardner is paving her political future at the expense of the people of Missouri, their tax dollars, and the integrity of their justice system.

We have a justice system in this country for a reason. And when the duly elected officials of that justice system use it to pursue political and personal ends, it insults our founding creeds and tarnishes the legal and ethical foundations of this country. Kim Gardner is nothing short of a threat to the United States of America as we know it. It is my hope that the good people of Missouri and the stewards of its judicial system stop her before it’s too late.