Hard Choices for Carson on the Road to Nevada

Armstrong Williams
|
Posted: Feb 23, 2016 12:01 AM
Share   Tweet
The opinions expressed by columnists are their own and do not necessarily represent the views of Townhall.com. 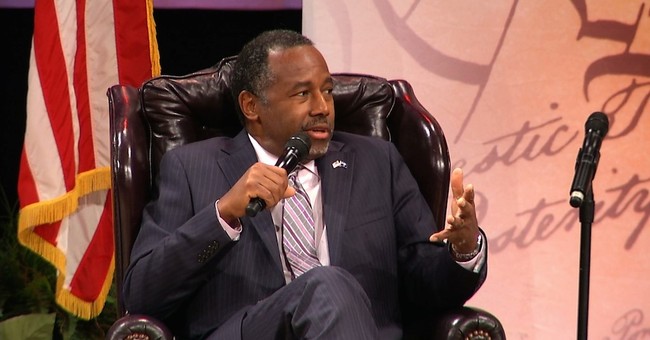 Dr. Ben Carson’s last place finish in the South Carolina Republican primary (he earned 7.2% of the total votes cast) on Saturday has given rise to speculation that he must make some difficult choices about whether or not to continue his campaign – especially after Jeb Bush, who came in slightly higher than Carson at 7.8% in South Carolina, announced he was suspending his campaign on Saturday.  However, Carson’s path to the nomination has always differed from an establishment candidate like Bush, and Carson’s decision about whether and how to advance his campaign is likely to be made based on different considerations.

One of the major factors in terms of Carson’s continued relevance is the fact that his strength among evangelicals in South Carolina was widely seen as having cost Ted Cruz a second place finish in the state.  Rubio edged out Cruz by a hairs-breadth, receiving 22.5% of the votes compared to Cruz’s 22.3%.  Clearly the Cruz camp sees Carson’s continued participation in the race as a major impediment to Cruz’s rise in the polls – and this will only intensify as the campaign moves into Nevada, where the evangelical vote constitutes a smaller, shallower pool.

Cruz failed in his attempt to get Carson to concede during a face to face meeting on Saturday in South Carolina before the voting began, and after bad blood between the two over ‘dirty tricks’ allegedly played by the Cruz campaign in Iowa had spilled over the two subsequent contests.  The Cruz campaign’s attempt to dissuade Carson’s Iowa voters from turning out, or to deceive them into believing Carson had in fact dropped out of the race, probably played a major factor in Cruz’s upset of Donald Trump in the state.  Carson’s refusal to concede in the days leading up to the South Carolina primary, combined by George Bush’s exit, might have the effect of emboldening his supporters to continue to campaign for him in the remaining primaries.

Thus Carson’s value as a candidate who either can win the primaries or lend significant support to the ultimate nominee has the potential to rise significantly going forward. It is far from over for the Carson campaign in that respect.

On the other hand, Carson does face some hard choices.  He has not placed among the top three in any of the primaries thus far, and even though his supporters are asking him to stay in the race, he will have to face the harsh reality sooner rather than later. Republican primary voters are favoring an angry, aggressive candidate as Donald Trump’s landslide victory in South Carolina seems to indicate. It goes almost without saying that Trumps’ and Carson’s styles could not be any more diametrically opposed.  If voters want an angry candidate, they are not going to get it from Carson, whose demeanor is unswervingly cool and deliberative.

Still there is some room to maneuver for Carson.  Whether he can add value as someone who reduces competition for Trump, or increases the viability of the Rubio campaign remains to be seen.  At first glance it would seem that Rubio, both because of his Florida base (which he shared with Jeb Bush) and his establishment credentials, will inherit establishment votes conceded by Bush in his exit from the race.  The competition for second place is where the race is at right now.  Cruz needs every vote he can get – and that places Carson in a prime negotiating position.  On the other hand, the Trump campaign is clearly worried about a surging Rubio after his campaign finished unexpectedly strong in the three primary contests thus far.  The Trump campaign may see Carson’s exit from the race as an opportunity to boost Cruz and hamstring Rubio’s momentum.

Those who know and love Dr. Carson all want the best for him.  When it’s all said and done, no matter how it turns out, Dr. Carson will have established a new model for an outsider candidate in Republican Presidential politics.  He continues to build on a groundswell of goodwill and popularity all over the country that is sure to carry over into anything he decides to do next.

And, there is always the chance that unforeseen factors may dramatically change the electoral calculus.  Especially when you have an outsider like Trump leading the race, and with so much controversy surrounding his campaign rhetoric, the unexpected is almost guaranteed.  At some point along the line, voters may have blown off their steam and no longer be so attracted to the angry rhetoric; they may be more willing to take a second look at a candidate who doesn’t play petty politics, and who has a track record of honor and integrity.

In the near term, it looks as if a current of anger and resentment among voters has aided Trump’s ascendancy in the primaries – but that current could conceivably change.  And if it does, only someone who still has an oar in the water can take advantage of it.