Gun Control & The Disarming of the Black Community 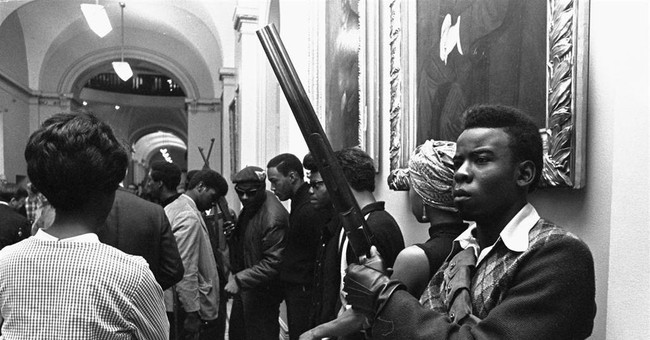 I hate to say it, but Ronald Reagan was the father of the modern gun control movement in America. Of course that was at a different time in this country, when Reagan was Governor of California and black radicals had taken over the state house toting machine guns and chanting Black Power. At that time, the solution to having large numbers of blacks publicly exercising their 2nd Amendment rights scared the religion out of a political establishment already on edge at the height over agitation concerning civil rights.

On May 7, 1967, The Black Panthers showed up on the steps of the California State Capitol in Sacramento brandishing loaded rifles and black berets in a show of defiance that would forever brand them as enemies of the establishment. They were there to protest the passage of the Milford Bill (nicknamed the ‘Black Panther Bill’ by the press), which had been fast-tracked through the legislature and signed by then Governor Ronald Regan. The bill reversed existing California law which made it legal to carry a loaded firearm in public as long as it was not concealed or brandished in a threatening manner. Reagan himself was quoted as saying that he saw "no reason why on the street today a citizen should be carrying loaded weapons."

But we should back track a little bit to get an understanding of what had everyone so up in arms – no pun intended. The Black Panthers in 1966 had announced that they advocated black people, primarily in Oakland California arm themselves to protect against what they (and many in the black community) widely viewed as political oppression carried out by the police. Incidence of alleged police brutality, including the killing of unarmed citizens were rampant in Oakland. In response, the Panthers established the ‘police patrols’, which consisted of armed groups of blacks following police cars around the city and documenting each time police stopped or arrested a black citizen. Under California law the Panthers’ activities, though highly unorthodox, were perfectly legal. They would also carry law books and copies of municipal code to ensure that all police actions were carried out by the book.

The Panthers’ police patrols proved wildly popular among members of Oakland’s black community. Not surprisingly, the police were alarmed. Gradually, incidents of government abuse of citizens abated. But the sight of armed uniformed blacks roaming around the city using the law to challenge the authorities was more than the city bargained for. Officials believed that if the police patrols spread to other cities there could be a real risk of political revolution in the inner cities. Hence the ongoing government effort to curb the lawful possession of guns by inner city blacks.

Fast forward to today. The inner cities in which most blacks live have some of the most draconian gun laws in the nation, but also suffer from some of the highest per capita murder rates in the country. For example, the overall per capita murder rate in America sits at around 5 murders per 100 hundred thousand residents. However, in major inner cities in which blacks make up a majority, the murder rate is orders of magnitude higher. Detroit has a per capita rate of over 45, followed by Newark with and New Orleans with per capita rates hovering at about 40 and Baltimore with a murder rate of roughly 37. Chicago has a murder rate more than triple the national average at around, 18 deaths per hundred thousand.

Given the restrictive gun laws in these cities, the alarming rates of homicides cannot be the fault of guns per se. It is really a symptom of a culture of violence that has at its core criminal turf wars over the illegal drug trade. But despite these obvious facts, every time an incidence of mass murder reaches the national consciousness, anti-gun activists go on a tirade over the lack of restrictive gun legislation.

But what is particularly ironic is that the black community tends to go for the anti-gun argument almost reflexively. That is despite the fact that blacks have traditionally faced the brunt of official tyranny more than any other group in this country – dating back from the slave patrols, to the civil rights movement and even up to this day, with complaints about police misconduct in the black community. How can a community that refuses to stand up for itself – that refuses exercise its Constitutional right to keep and bear arms - ever be respected by the powers that be?

White Americans are under no illusion that the government can and will grab as much power as it can in the absence of a vigilant citizenry. There are countless examples; from the Cliven Bundy incident – in which armed ranchers successfully rebuffed the government’s attempt to violate age-old grazing rights – to the State of Texas, which recently passed laws empowering citizens to carry weapons for self-defense on college campuses.

Perhaps it is because some in the black community fear the self-determination, the responsibility, and the independence needed to bear arms and participate fully and forcefully in the political process will deprive them of their victimhood. That is to a certain degree understandable. Victimization has born fruits over the past half century, although the returns have certainly diminished as of late. Why not give independence a try?