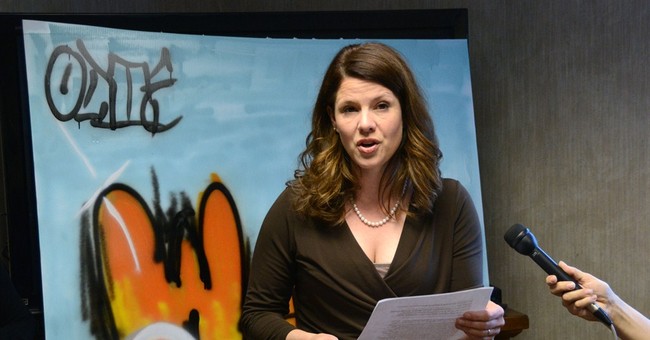 Former South Dakota U.S. Senate candidate Annette Bosworth’s trial started Tuesday, May 30, 2015. The 43-year-old Sioux Falls physician was accused by State Attorney General Marty Jackley of having committed what is commonly referred to as “voter fraud.” Specifically, she had been indicted for having turned in nominating petitions that include the names of people whose signatures she did not personally witness being affixed to said petitions.

That she did this is beyond dispute. According to ballot access activist Paul Jacob, Jackley’s “threatened penalty is the most severe any American has ever faced on a petition-related charge” while “the transgressions alleged against Dr. Bosworth are arguably the least sinister” he’s ever seen brought to trial.

Dr. Bosworth admits that some of the petitions she submitted had been left out on the counter in her medical office for her patients to sign if they chose to do so. This occurred while she was part of a Christian medical relief team providing emergency care to the survivors of a typhoon that had devastated the Philippines. She turned the documents into the proper authorities only after being advised by those in the employ of her campaign that the requirement of personally witnessing the signing of petitions was something that no one in South Dakota politics took seriously.

This, of course, was her big mistake. Attorney General Jackley—with whom Bosworth has previously tangled with on issues ranging from alleged Medicaid fraud to fights over her license to practice medicine—charged her with six counts of filing a false document and six counts of perjury. These are all felonies. Unfortunately for Bosworth, after jurors deliberated for more than three hours on Wednesday, she was convicted of these various counts and she could go to jail for up to 24 years and incur as much as $48,000 in fines. The numerous convictions could also possibly force Bosworth to surrender her medical license, which Jackley has attempted several times to strip Bosworth of, to no avail. This potentially disastrous situation stems from 37 signatures on six sheets of paper – each of which belonged to a living, breathing, registered South Dakota voter who supported Bosworth in the primary. And the pivotal reason that people know they were all real live voters is that agents of the state’s Division of Criminal Investigation (in their black SUVs and black windbreakers) performed due diligence and thoroughly checked – activities that some people regard as somewhat extreme.

The morality of the election process is something that should be considered inviolate. Regarding this particular case, Deputy Attorney General Bob Mayer was quoted saying, “The jury sends the message that our electoral process is very sacred, and the integrity of the process has to be protected.” Jacob makes this point clear in the 18-page report he has issued regarding the case. And let it be known that voter fraud does indeed exist, despite the claims of those who oppose rational protections such as the requirement that each person seeking to vote must produce a valid photo ID at his or her respective polling location. Nevertheless, what Jackley is attempting to do is more a matter of using the power of his office to settle a personal vendetta against Bosworth – whose husband ran against him for attorney general last fall on the Libertarian Party line after the indictment had been issued – than an undertaking being carried out in the best interests of justice.

As Jacob argues the rules concerning the circulation of petitions, whether they are for the purpose of nominating a candidate or getting a citizen-initiative on the ballot in those states that allow them, the rules should be enforced. However, the actions taken by Jackley appear to be more than simple enforcement; he is trying to throw the book at Bosworth in order to get her to surrender her license to practice medicine -- which is not a penalty under the state’s election laws. His personal interest and involvement in the case takes the issue out of the realm of election law and drops it squarely into the debate over the power of federal, state, and local officials to over-criminalize just about every aspect of life in America. While Jackley said that prosecutors would review mitigating and aggravating circumstances before making a sentencing recommendation on behalf of Bosworth, it is clear where his bias lies. “Under South Dakota law, non-violent felonies such as these carry a presumption of no or limited actual jail time. The presumption may be overcome [in this case] by the defendant’s conduct.”

With each step forward down this path, the nation moves farther and farther away from the interests of justice and the idea of personal liberty that the Founders considered so important when they wrote it into the Declaration of Independence and the U.S. Constitution. The circumstances happening in South Dakota can and do happen elsewhere, but it has to stop.