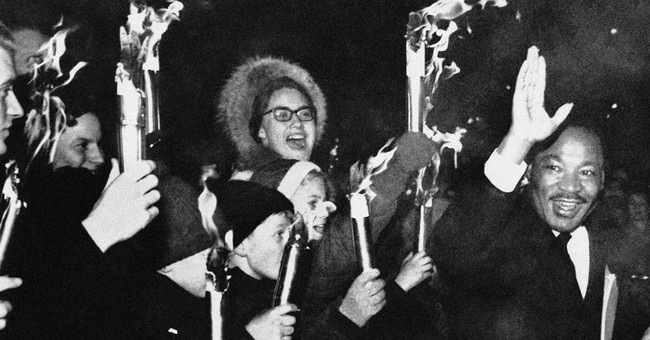 On this anniversary of the birth of Dr. Martin Luther King, his legacy is in sure hands. His youngest daughter, Pastor Bernice King has taken over leadership CEO of the King Center in Atlanta and is already doing great things. Notably she has spent time in Ferguson working with the youth in that community to channel their rage and frustration over the turmoil surrounding the Michael Brown shooting into positive action. Her brilliant work continues the process constructive engagement begun by her father as he helped channel black rage over social marginalization into a movement that fundamentally transformed America.

But Bernice King’s work needs to be viewed within the context of King’s overall message, or it might fall short of its intended impact. While a major thrust of Dr. King’s movement was to eradicate legal barriers to full participation in the American enterprise, his push for economic empowerment has been largely ignored, much to the detriment of those in whose name he fought and died. When Dr. King came to Washington to deliver his most famous “I have a Dream” speech on the mall, he started out by decrying “the manacles of segregation and the chains of discrimination.” Most of the push for civil rights since his passing has focused on eradicating discrimination and challenging the social stigma of racism. But in the very next sentence Dr. King lamented the economic dislocation of Black America, calling it “a lonely island of poverty in the midst of a vast ocean of material prosperity.” Addressing the economic challenges of Black America was just as essential to King as the social challenges. In fact they were inseparable.

Later in the ‘I have A Dream Speech,’ Dr. King continues to hit home on the theme of economic justice. “In a sense,” he said, “we have come to our nation’s Capital to cash a check… a check which has come back marked ‘insufficient funds’.” This analogy is as apropos today as it was in 1963. No American today is denied the right to vote or forced by law to attend segregated schools or refused a seat at a lunch counter. And yet dire economic challenges remain. Unemployment among black males is at an all-time high. The great wealth disparity between black and white households remains intransigent. And so one wonders, what good is social equality without economic means? What’s the use of having the right to sit at a lunch counter if one can’t afford to pay for a meal?

It is precisely these issues that a brilliant public intellectual and social entrepreneur John Hope Bryant addresses in his new book, “How The Poor Can Save Capitalism.” In the book Bryant highlights the irony that the primary driver of American capitalism is the consumer spending of the poor and middle class. He chronicles the problem for capitalism when the poor are so disenfranchised that they cannot even get access to the basic tools of financial literacy and citizenship. He addresses some of the root causes, and then begins to chart a way forward. He discusses issues of financial literacy designed to teach people how to improve their credit, and build a wealth consciousness. He also points out some of the pernicious consequences of a poverty mindset, including the pathological behaviors that can result from a lack of hope.

But the thing that stands out in Bryant’s work is actually what it doesn’t contain: a recipe for social agitation and protest for more laws to address economic inequality. His vision is that rather than taking from the rich and giving to the poor, one should instead equip the poor with the tools necessary to build economic wealth. Bryant’s L.A.-based non-profit, Operation Hope, is rightly characterized as a civil rights organization – but not in the traditional sense. It does not intend to achieve its aims by giving voice to victimization. Rather, it has adopted a more audacious mission: to create the largest private bank for the poor and middle class in the United States. The goal of the institution would be to provide not only capital for small businesses, but also to teach financial literacy and improve the economic status of the poor by increasing their credit scores. Access to credit on equal terms is a form of financial dignity, and dignity is the cornerstone of true aspiration.

In truth, innovative entrepreneurs such as Bryant who identify a need and find a way to fill it are also valiant guardians of Dr. King’s vision and legacy. The spirit of entrepreneurship really lies in seeing opportunity where others see only destruction. It is a creative ethic that gets beyond the zero sum game of ‘less for you means more for me’ and vice-versa. That’s the part of Dr. King’s transcendental vision that often gets lost in the debate. Towards the end of Dr. King’s life had evolved from a focus on civil rights to a focus on fighting poverty. King was not an entrepreneur himself, but like entrepreneurs he had the vision to see beyond the social constraints of society at that time. He did not believe that wealth was a four letter word. Rather he wanted bring the fruits of American prosperity to a broader segment of the population.

We also need to address the images that our children see of themselves in the media, and help to promote positive examples that counteract the negative media stereotypes that have become so pervasive. Through the privilege of television ownership, my company Howard Stirk Holdings has begun leading the effort to change stereotypes by developing independent, positive programming specifically directed at children of color. Programming in development and soon to be rolled out in six local markets around the country will highlight and celebrate the achievements of academically talented youth. I believe that too often media owners have reverted to the lowest common denominator in promoting sex and violence to sell advertising. My mission is also to demonstrate to the business community that promoting positive images and messages is also great for the bottom line.

Dr. King’s social and economic visions feed into each other. The vision for American prosperity is inextricably linked to the fate of the poorest Americans. When they are lifted out of poverty they help to fuel the greatest economic engine the world has ever known. The brilliance of King’s concept is that it does not pit the capitalist against the laborer in a Marxist death spiral. Rather it urges a broader consciousness of the ‘ecology of prosperity’ in which each segment of society plays a critical role in the overall health of the American society.