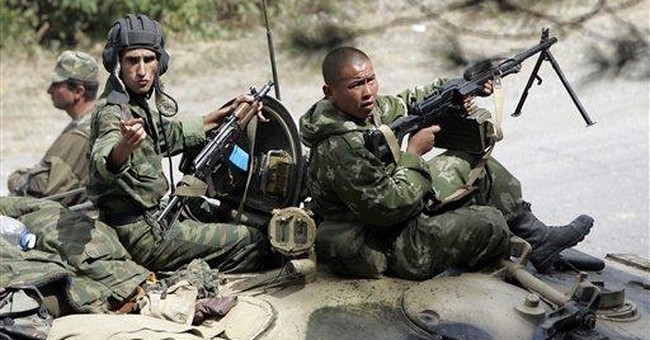 There’s a crisis in Georgia and the United States and the western world must respond quickly and decisively to stop Russia and bring sanity back to the region immediately. The key here is not just to help defenseless and innocent people, but to bring peace back to a region where peace is quite achievable. In today’s volatile world, nobody can afford another war – big or small – and when international victories are out there to be had, we must grab them with all our might.

Georgia is a transcontinental country (it spans more than one continent) in Europe and Asia. It covers nearly 70,000 square kilometers, compared to its northern neighbor Russia, which spans over 17 million square kilometers. In terms of population, Georgia boasts a population of 4.6 million people, whereas Russia hosts 142 million people. My point? We have a true modern day David and Goliath going on over there.

So what do we do about it? Obviously our money and manpower is tied up in Iraq, and our brainpower is being used on Afghanistan, Iran, and other rogue countries. Thus, fighting another battle somewhere else is all but impossible. And even if we could join the battle militarily, our government wouldn’t want to, considering the current strain on our troops and general aversion of the idea by American citizens. But we have to do something to protect the Georgian citizens, hundreds of which have been killed or wounded, and thousands of which have been displaced.

“The United States stands with the democratically elected government of Georgia and insists that the sovereignty and territorial integrity of Georgia be respected," President Bush said during remarks in the White House Rose Garden on Wednesday. “To demonstrate our solidarity with the Georgian people," the president announced that he was sending Secretary of State Condoleezza Rice to Paris to assist the West’s diplomatic efforts on the crisis, and then to the Georgian capital of Tbilisi.

Bush also announced that a massive humanitarian effort was already in progress, and would involve American aircraft and naval forces. A military cargo plane loaded with supplies is already on the way, and Bush said that Russia must ensure that “all lines of communication and transport, including seaports, roads and airports,” remain open to let deliveries and civilians.

These are the right moves by our president. He is sending aid, monitoring the situation, and sending his top cabinet members to assess the situation first hand. Obviously though, repercussions for Russia are an absolute must. Punishment ideas against Russia include, removing them from the G-8 group of industrialized nations, taking away their hosting of the 2014 Winter Olympic Games, or playing hard ball with their relationship with the North Atlantic Treaty Organization.

Whatever our response as a nation and civilized world, one thing needs to be clear: that the United States of America wants to peacefully support all civilized nations achieve prosperity, Democracy, and security. Over the last six years we have stumbled down a turbulent path that can only be leveled out with continuous and consistent support for international bodies, allies, and burgeoning Democracies. That being said, the US government must tread carefully so not to upset or further derail our struggling economy. Aid and a military presence are two different things when it comes to the economic impact at home. Nobody, even the hardest hawks out there, believes our country – economically or otherwise – can handle another military bout at the moment.

Most experts agree that though the situation in Europe is volatile because of the Russia-Georgia crisis, there is little chance that the crisis will escalate into anything out of control. Georgia is just too small of a coo entry to maintain anything indefinitely and because of Russia’s standing in the world, the United Nations and international community seem on the edge of their seat to stop this before it gets to the next step. Just the fact that President Bush delayed his own vacation and sent Condoleezza Rice to Europe shows that world leaders are focused on the situation and will keep their pulse on the problem until it is resolved.

Yes, the United States is limited in what we can do to solve this crisis. But the very fact that we are taking a proactive approach by sending humanitarian workers and aid, working with the UN and NATO, and sending top aids to the region shows a commitment to international peace and prosperity. This is the America that we must see more of in the future, for if we can help solve international dilemmas, gain allies, and keep our money and manpower at home, we will solidify our stance as the greatest country in the world.