Ann McElhinney
|
Posted: Jun 01, 2018 12:01 AM
Share   Tweet
The opinions expressed by columnists are their own and do not necessarily represent the views of Townhall.com. 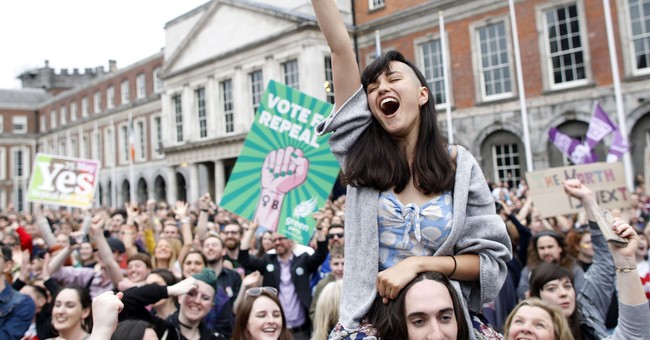 There was something profoundly disturbing to be Irish and see the celebrations of the Yes voters in the Irish abortion referendum on Saturday. They were grinning, dancing, cheering, raising champagne glasses. It was frightening, alienating.

This was even though Dr Peter Boylan, a senior OB/GYN and leaderof the Yes side, had acknowledged in debates before the referendum, that life began at conception. So here were people jubilantly celebrating the ability to legally end a life. I thought, even for the Yes voters this should have been a sober, serious moment.

“..they know not what they do,” I kept thinking. The Irish writer John Waters said “On Friday, the Irish people climbed Calvary backwards, in the name of progress,” a friend in Australia, Libby Young, wrote. She was thinking of Calvary too. She knows abortion, from painful personal experience. "I wish I had known what abortion actually was…There was one woman out the front of the abortion clinic protesting. I remember thinking how cruel she was making me feel worse... I felt like she was my enemy... I think about that woman now and it’s so desperately sad in hindsight that she cared more about my own unborn child than I did."

I know about abortion from investigating the Kermit Gosnell story for a book and movie. He was the Philadelphia abortionist convicted of murdering babies born alive. Along with being America’s most prolific serial killer, Gosnell was also a prolific legal abortionist. Part of the trial’s discovery were pictures of the 47 babies whose remains were stored in the basement of his clinic. He was not charged with killing them because they were determined to be within the regulations. These babies quite literally represented the face of legal abortion.

And their faces are unforgettable, haunting. The medical examiner who photographed them had to clean them, in some cases rehydrate them and present them as evidence in the trial. But he couldn't effect or change the expression on their faces when they died. One of the babies had his hand in front of his face, attempting to shield himself, another has a finger pointing up like he was making an argument. They are like the bodies discovered in Pompeii, their expressions at their moment of death preserved forever in stone.  In my mind the faces of the 47 bodies from Gosnell's clinic are the silent but eloquent affront to all the dancers in Ireland on Saturday.

Ireland now has the distinction of being the only country in the world whose people have voted for abortion and they are delighted. But do they really know what they are dancing for?

Often when I speak to pro-life groups about the Gosnell story I start by saying I will be very happy when I'm no longer talking about abortion. A large part of me doesn’t want to have anything to do with it.

In that way I'm just like a lot of the voters in Ireland, who didn't want to think about abortion and didn’t. The Yes campaign focused on 'women's choice’ and “rights,” the word abortion rarely featured on the posters. That made it easy to vote Yes.

Makes sense, because what's not easy to focus on, is that abortion ends another person's life. And the method of death using poisons, ripping off arms and legs, sucking out brains is savage. Two of the methods used are D&E and suction. D&E is described well in the Gosnell trial testimony.

Dr Karen Feisullin is a respected abortion provider. McMahon was the defense lawyer for Gosnell.

McMahon: “From what I’ve seen, and you can correct me, you obviously know more about it than I do, the evacuation process can be one where tools are used and the pieces are pulled out; right?

McMahon: “And you might pull out an arm or a leg or some portion of that?”

With larger babies it is necessary to deliver the baby breached and then suction the brain. Dr Feisullin told the jury, “A suction catheter is inserted at the base of the skull to remove the contents of the head because the head is the largest part of the body that sometimes get stuck and the brain is suctioned out, grey matter is suctioned out, the skull collapses and it comes out easily.”

Suction abortions are no less gory. The suction machine uses the same principle as a vacuum cleaner. It is then the job of a junior assistant to empty the jars that fill when the machine is turned on. Assistants need to reconstruct the baby from the contents of the jar to ensure that all the pieces have been removed. Any baby parts left behind could become infected and cause toxic shock. They literally have to find two arms, two legs and the other baby parts and put all the pieces together.

That's what will be done now in Ireland by doctors for any reason.

Yes voters can't have known, can they?

Ann McElhinney is the co-author  of the New York Times bestseller Gosnell-The Untold Story of America's Most Prolific Serial Killer. She is a producer and a screenwriter of the Gosnell Movie.

Share this on Facebook
Tweet
Matthew McConaughey Makes An Announcement on Whether or Not He Will Run for Governor of Texas
Rebecca Downs
So, It Looks Like CNN Did Not Learn The Same Lesson WaPo Had to with Tweeting About the Waukesha Tragedy
Rebecca Downs
Legal Experts Have Bad News for Civil Rights Suits Against Kyle Rittenhouse
Rebecca Downs
Dr. Francis Collins Spews Word Salad When Asked By Fox News Reporter About Case Numbers In Florida
Scott Morefield
Enes Kanter to Change Last Name to 'Freedom' as He Becomes U.S. Citizen
Landon Mion
NIH Director Francis Collins: Vaccines 'Most Likely' Protect Against Omicron Variant, 'No Reason to Panic'
Rebecca Downs