Happy Kwanzaa! The Holiday Brought to You By the FBI

Ann Coulter
|
Posted: Dec 24, 2019 12:01 AM
Share   Tweet
The opinions expressed by columnists are their own and do not necessarily represent the views of Townhall.com. 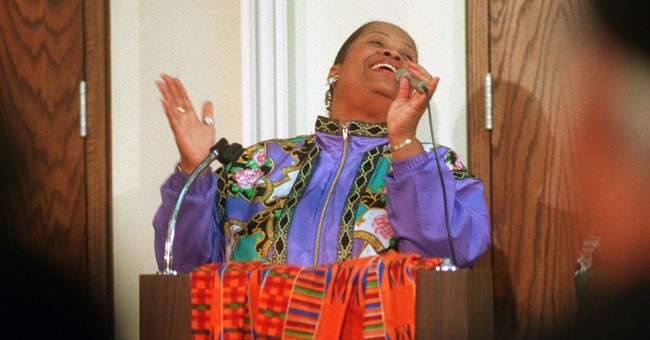 In what was ultimately a foolish gambit, during the madness of the '60s, the FBI encouraged the most extreme black nationalist organizations in order to discredit and split the left. The more preposterous the group, the better. (It's the same function MSNBC serves today.)

Those were the precepts of Karenga's United Slaves. The United Slaves were proto-fascists, walking around in dashikis, gunning down Black Panthers and adopting invented "African" names. (I will not be shooting any Black Panthers this week because I am Kwanzaa-reform, and we are not that observant.)

It's as if David Duke invented a holiday called "Anglika," which he based on the philosophy of "Mein Kampf" -- and clueless public schoolteachers began celebrating the made-up, racist holiday.

In the category of the-gentleman-doth-protest-too-much, back in the '70s, Karenga was quick to criticize Nigerian newspapers that claimed that certain American black radicals were CIA operatives.

But the left has forgotten the FBI's tacit encouragement of this murderous black nationalist cult founded by the father of Kwanzaa.

In one barbarous outburst, Karenga's United Slaves shot two Black Panthers to death on the UCLA campus: Al "Bunchy" Carter and John Huggins. Karenga himself served time -- a useful stepping-stone for his current position as the chair of the Africana Studies Department at California State University at Long Beach.

(Speaking of which, the cheap labor lobby certainly was right about how the GOP could easily win over "socially conservative" minorities. Look at how California has swung decisively to the right since whites became a minority there. Good luck winning California now, Democrats!)

Back to the esteemed Cal State professor: Karenga's invented holiday is a nutty blend of schmaltzy '60s rhetoric, black racism and Marxism. The seven principles of Kwanzaa are the very same seven principles of the Symbionese Liberation Army, another invention of The Worst Generation.

In 1974, Patty Hearst, kidnap victim-cum-SLA revolutionary, famously posed next to the banner of her alleged captors, a seven-headed cobra. Each snakehead stood for one of the SLA's revolutionary principles: Umoja, Kujichagulia, Ujima, Ujamaa, Nia, Kuumba and Imani. These are the exact same seven "principles" of Kwanzaa, or "Kawaida," as Karenga calls them. (And here's something interesting: Kawaida, Kwanzaa and Kuumba are also the only three Kardashian sisters not to have their own shows on the E! network.)

Kwanzaa praises collectivism in every possible area of life. It takes a village to raise a police snitch.

When Karenga was asked to distinguish Kawaida, the philosophy underlying Kwanzaa, from "classical Marxism," he essentially said that, under Kawaida, we also hate whites.

Kwanzaa emerged not from Africa, but from the FBI's COINTELPRO. It is a holiday celebrated exclusively by idiot white liberals. Black people celebrate Christmas.