Ann Coulter
|
Posted: May 18, 2016 2:48 PM
Share   Tweet
The opinions expressed by columnists are their own and do not necessarily represent the views of Townhall.com. 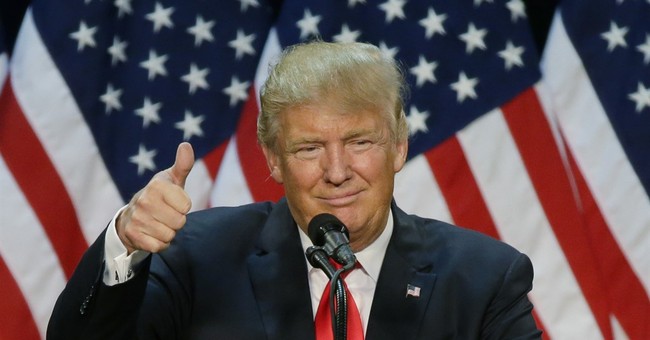 The New York Times’ front-page article last Saturday on Donald J. Trump’s dealings with women forced me into a weekend of self-examination. As much as I support Trump, this isn’t a cult of personality. He’s not Mao, Kim Jong-un or L. Ron Hubbard. We can like our candidates, but still acknowledge their flaws. No one’s perfect.

I admit there are some things about Trump that give me pause. I’m sure these will come out eventually, so I’m just going to list them.

First — and this is corroborated by five contemporaneous witnesses — in 1978, Trump violently raped Juanita Broaddrick in a Little Rock, Arkansas, hotel room, then, as he was leaving, looked at her bloody lip and said, “Better put some ice on that” — oh wait, I’m terribly sorry. Did I say Trump? I didn’t mean Trump, I meant Bill Clinton.

Hang on — here we go! Knowing full well about Bill Clinton’s proclivity to sexually assault women, about three weeks after that rape, Trump cornered Broaddrick at a party and said, pointedly, “I just want you to know how much Bill and I appreciate the things you do for him. Do you understand? Everything you do.”

No! My mistake! That wasn’t Trump either. That was Hillary Clinton. … But this next one I’m sure was Trump.

In the early 1990s, Trump invited a young female staffer to his hotel room at the Excelsior Hotel in Little Rock, dropped his pants and said, “Kiss it” — WAIT A SECOND!

I don’t know how this keeps happening. That was Bill Clinton. Please bear with me — it’s late at night and my notes are jumbled.

As CEO of an organization, Trump had a female employee, just months out of her teens, perform oral sex on him while he made business calls. That girl’s name was Monica Lewin– No! Wrong again! That was Bill Clinton, too! Please don’t stop reading. Let me find my Trump notes …

What I meant was that Trump was the one who later smeared that girl as a delusional stalker. She may have volunteered for the sex — at around age 20 — but Monica Lewinsky didn’t volunteer to be slandered! And yet this fiend, this user-of-women, this retrograde misogynist, Donald Trump, deployed his journalist friends, like Sidney Blumenthal, to spread rumors that Monica was a stalker, trying to blackmail the president.

Oh, boy–this is embarrassing. This must seem very sloppy. That wasn’t Trump either; it was Hillary Clinton.

There must be something here that was Trump … Here! I have one.

When an attractive woman desperately in need of a job came to Trump’s office in 1993, instead of helping, he lunged at her, kissed her on the mouth, grabbed her breast and put her hand on his genitals. He later told a mistress that the claim was absurd because the woman, Kathleen Willey, had such small breasts.

Uh-oh — you’re not going to believe this, but — yep, that was Bill Clinton.

This one, I’m sure was Trump. In January 1992, Trump went on “60 Minutes” to slime nightclub singer Gennifer Flowers, knowing full well she was telling the truth. He implied she belonged in a loony bin, telling millions of viewers “every time she called, distraught … she said sort of wacky things.”

Dammit! I don’t know how this keeps happening. That wasn’t Trump! That was Hillary, smearing one of her husband’s sexual conquests.

Let’s just go back to the Times’ story, based on months of investigation and interviews with hundreds of women. I’ll give it to you straight: When Trump was at the New York Military Academy as a teenager, one person who knew him said — and this is corroborated by two other witnesses: “Donald was extremely sensitive to whether or not the women he invited to campus were pretty.”

I almost threw up reading that. I am physically ill.