At the End of the Day, Diversity Has Jumped the Shark 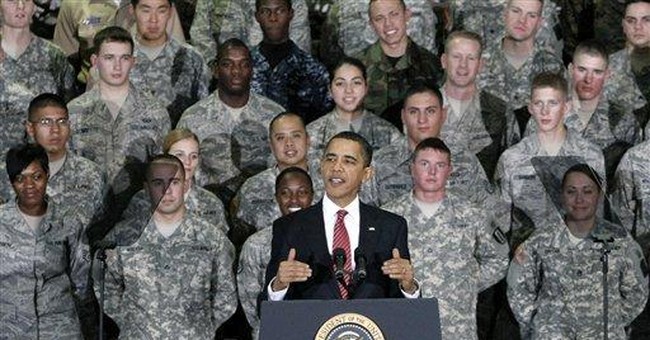 It cannot be said often enough that the chief of staff of the United States Army, Gen. George Casey, responded to a massacre of 13 Americans in which the suspect is a Muslim by saying: "Our diversity ... is a strength."

As long as the general has brought it up: Never in recorded history has diversity been anything but a problem. Look at Ireland with its Protestant and Catholic populations, Canada with its French and English populations, Israel with its Jewish and Palestinian populations.

Or consider the warring factions in India, Sri Lanka, China, Iraq, Czechoslovakia (until it happily split up), the Balkans and Chechnya. Also look at the festering hotbeds of tribal warfare -- I mean the beautiful mosaics -- in Third World hellholes like Afghanistan, Rwanda and South Central, L.A.

"Diversity" is a difficulty to be overcome, not an advantage to be sought. True, America does a better job than most at accommodating a diverse population. We also do a better job at curing cancer and containing pollution. But no one goes around mindlessly exclaiming: "Cancer is a strength!" "Pollution is our greatest asset!"

By contrast, the canard "diversity is a strength" has now replaced "at the end of the day," "skin in the game," "blood and treasure," "jumped the shark," "boots on the ground," "horrific" (whatever happened to the perfectly good word "horrible"?), "not so much," "I am shocked, shocked to find that gambling is going on here," and "that went well," as America's most irritating cliche.

We should start making up other nonsense mantras along the lines of "diversity is a strength" and mindlessly repeating them until they catch on, too.

Next time you're at a cocktail party, just start saying, "Chocolate pudding is dramatic irony" from time to time. Eventually other people will start saying it, without anyone bothering to consider whether it makes sense. Then we'll do another one: "Nicolas Cage is a two-cycle engine."

Before you know it, liberals will react to news of a mass murder by muttering, "Well, you know what they say: Nicolas Cage is a two-cycle engine," while everyone nods in agreement.

Except mere nonsense makes more sense than "diversity is a strength."

If Gen. Casey's wildly inappropriate use of this lunatic cliche in the aftermath of the Fort Hood massacre doesn't kill it, nothing will.

Among the worst aspects of America's "diversity" is that liberals' reaction to a heterogeneous population is to create a pecking order based on alleged victimhood -- as described in electrifying detail in my book, Guilty: Liberal 'Victims' and Their Assault on America.

In modern America, the guilty are sanctified, while the innocent never stop paying -- including with their lives, as they did at Fort Hood last week. Points are awarded to aspiring victims for angry self-righteousness, acts of violence and general unpleasantness.

But liberals celebrate diversity only in the case of superficial characteristics like race, gender, sexual preference and country of origin. They reject diversity when we need it, such as in "diversity" of legal forums.

After conferring with everyone at Zabar's, Obama decided that if a standard civilian trial is good enough for Martha Stewart, then it's good enough for the mastermind of the 9/11 attacks. So Khalid Sheikh Mohammed is coming to New York!

Mohammed's military tribunal was already under way when Obama came into office, stopped the proceedings and, eight months later, announced that Mohammed would be tried in a federal court in New York.

In a liberal's reckoning, diversity is good when we have both Muslim jihadists and patriotic Americans serving in the U.S. military. But diversity is bad when Martha Stewart and Khalid Sheikh Mohammed are subjected to different legal tribunals to adjudicate their transgressions.

Members of Congress have it in their power to put an end to this lunacy right now. If they don't, they are as complicit in Mohammed's civilian trial as the president. Article I, Section 8, and Article III, Section 1 of the Constitution give Congress the power to establish the jurisdiction of the lower federal courts and to create exceptions to that jurisdiction.

Congress could pass a statute limiting federal court jurisdiction to individuals not subject to trial before a military tribunal. Any legislator who votes "nay" on a such a bill will be voting to give foreign terrorists the same legal rights as U.S. citizens -- and more legal rights than members of the U.S. military are entitled to.

In the case of legal proceedings, diversity actually is a strength.