They Gave Your Mortgage To A Less Qualified Minority 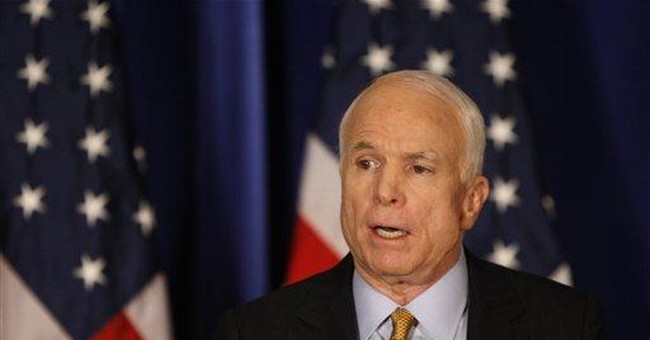 On MSNBC this week, Newsweek's Jonathan Alter tried to connect John McCain to the current financial disaster, saying: "If you remember the Keating Five scandal that (McCain) was a part of. ... He's really getting a free ride on the fact that he was in the middle of the last great financial scandal in our country."

McCain was "in the middle of" the Keating Five case in the sense that he was "exonerated." The lawyer for the Senate Ethics Committee wanted McCain removed from the investigation altogether, but, as The New York Times reported: "Sen. McCain was the only Republican embroiled in the affair, and Democrats on the panel would not release him."

So John McCain has been held hostage by both the Viet Cong and the Democrats.

Alter couldn't be expected to know that: As usual, he was lifting material directly from Kausfiles. What is unusual was that he was stealing a random thought sent in by Kausfiles' mother, who, the day before, had e-mailed: "It's time to bring up the Keating Five. Let McCain explain that scandal away."

In February this year, on Fox News' "Hannity and Colmes," Bennett said, for the eight billionth time:

"First, I should tell your listeners I'm a registered Democrat, so I'm not on (McCain's) side of a lot of issues. But I investigated John McCain for a year and a half, at least, when I was special counsel to the Senate Ethics Committee in the Keating Five. ... And if there is one thing I am absolutely confident of, it is John McCain is an honest man. I recommended to the Senate Ethics Committee that he be cut out of the case, that there was no evidence against him."

It's bad enough for Alter to be constantly ripping off Kausfiles. Now he's so devoid of his own ideas, he's ripping off the idle musings of Kausfiles' mother.

Even if McCain had been implicated in the Keating Five scandal -- and he wasn't -- that would still have absolutely nothing to do with the subprime mortgage crisis currently roiling the financial markets. This crisis was caused by political correctness being forced on the mortgage lending industry in the Clinton era.

Before the Democrats' affirmative action lending policies became an embarrassment, the Los Angeles Times reported that, starting in 1992, a majority-Democratic Congress "mandated that Fannie and Freddie increase their purchases of mortgages for low-income and medium-income borrowers. Operating under that requirement, Fannie Mae, in particular, has been aggressive and creative in stimulating minority gains."

Under Clinton, the entire federal government put massive pressure on banks to grant more mortgages to the poor and minorities. Clinton's secretary of Housing and Urban Development, Andrew Cuomo, investigated Fannie Mae for racial discrimination and proposed that 50 percent of Fannie Mae's and Freddie Mac's portfolio be made up of loans to low- to moderate-income borrowers by the year 2001.

Instead of looking at "outdated criteria," such as the mortgage applicant's credit history and ability to make a down payment, banks were encouraged to consider nontraditional measures of credit-worthiness, such as having a good jump shot or having a missing child named "Caylee."

Threatening lawsuits, Clinton's Federal Reserve demanded that banks treat welfare payments and unemployment benefits as valid income sources to qualify for a mortgage. That isn't a joke -- it's a fact.

When Democrats controlled both the executive and legislative branches, political correctness was given a veto over sound business practices.

Meanwhile, economists were screaming from the rooftops that the Democrats were forcing mortgage lenders to issue loans that would fail the moment the housing market slowed and deadbeat borrowers couldn't get out of their loans by selling their houses.

A decade later, the housing bubble burst and, as predicted, food-stamp-backed mortgages collapsed. Democrats set an affirmative action time-bomb and now it's gone off.

In Bush's first year in office, the White House chief economist, N. Gregory Mankiw, warned that the government's "implicit subsidy" of Fannie Mae and Freddie Mac, combined with loans to unqualified borrowers, was creating a huge risk for the entire financial system.

Rep. Barney Frank denounced Mankiw, saying he had no "concern about housing." How dare you oppose suicidal loans to people who can't repay them! The New York Times reported that Fannie Mae and Freddie Mac were "under heavy assault by the Republicans," but these entities still had "important political allies" in the Democrats.

Now, at a cost of hundreds of billions of dollars, middle-class taxpayers are going to be forced to bail out the Democrats' two most important constituent groups: rich Wall Street bankers and welfare recipients.