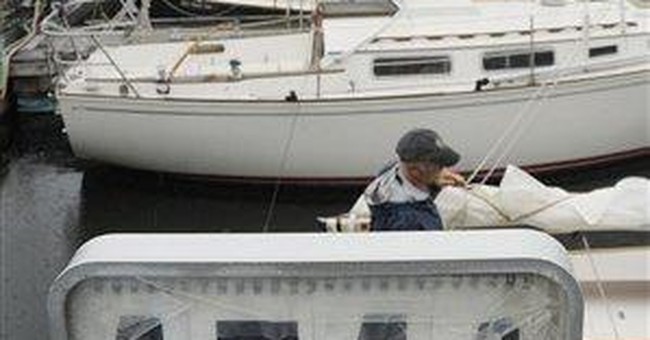 Liberals dismiss studies that show a link between abortion and breast cancer, claiming they are biased because the people promoting the studies are "anti-choice."

For the same reason, no one should believe the Democrats' "energy" policies.

Democrats couldn't care less about high gas prices. The consistent policy of the Democratic Party, going back at least to Jimmy Carter, has been to jack up gas prices so we can all start pedaling around on tricycles.

Environmentalists are constantly clamoring for higher gas taxes as the cure-all to their insane global warming theory. Clinton proposed a 26-cent tax on gas. John Kerry said it should be 50 cents. Gore endorsed the Malthusian proposal of Paul and Anne Ehrlich in "The Population Explosion" that gas taxes be raised gradually to match prices in Europe and Japan.

The result is consumers now pay about 46 cents per gallon in gasoline taxes. That's not including taxes paid directly to the government by the oil companies and passed onto consumers. As the inestimable economist John Lott has pointed out, in the past 25 years oil companies have paid more than three times in taxes what they have made in profits.

B. Hussein Obama's response to soaring gas prices is to have the oil companies collect even more money from us at the pump, proposing a "windfall profits tax" on oil companies. "Corporate taxes" sound like taxes on rich people, but all they do is force corporations to collect taxes on behalf of the government.

Democrats have worked hard to ensure that Americans pay as much for gas as Europeans do. After a quarter-century of gas tax hikes, a ban on drilling for oil and a complete destruction of the nuclear power industry in America, I guess liberals can declare: Mission accomplished!

In response to skyrocketing gas prices, liberals say, practically in unison, "We can't drill our way out of this crisis."

Seriously, what does it mean? Finding more oil isn't going to increase the supply of oil?

It is the typical Democratic strategy to babble meaningless slogans, as if they have a plan. Their plan is: the permanent twilight of the human race. It's the only solution they can think of to deal with the beastly traffic on the LIE (Long Island Expressway).

How do liberals propose we acquire the energy required for the economic activity and production that results in light appearing when they flick a switch? The larger enterprise involved in producing that little miracle eludes them.

Liberals complain that -- as B. Hussein Obama put it -- there's "no way that allowing offshore drilling would lower gas prices right now. At best you are looking at five years or more down the road."

This is as opposed to airplanes that run on woodchips, which should be up and running any moment now.

Moreover, what was going on five years ago? Why didn't anyone propose drilling back then?

Say, you know what we need? We need a class of people paid to anticipate national crises and plan solutions in advance. It would be such an important job, the taxpayers would pay them salaries so they wouldn't have to worry about making a living and could just sit around anticipating crises.

If only we had had such a group -- let's call them "elected representatives" -- they could have proposed drilling five years ago!

Six long years ago President Bush had the foresight to demand that Congress allow drilling in a minuscule portion of the Alaska's barren, uninhabitable Arctic National Wildlife Refuge (ANWR). In 2002, Bush, Tom DeLay and the entire Republican Party were screaming from the rooftops: Drill! Drill! Drill!

We'd be gushing oil now -- except the Democrats stopped us from drilling.