Andy Surabian
|
Posted: Jul 05, 2020 12:01 AM
Share   Tweet
The opinions expressed by columnists are their own and do not necessarily represent the views of Townhall.com. 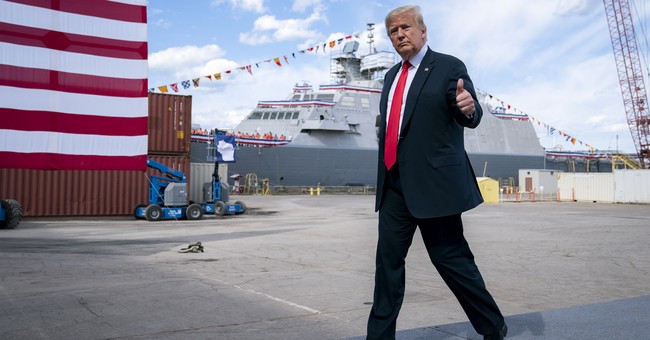 The Swiss company is part of a swamp campaign to undermine one of the President’s signature economic successes, the USMCA, by increasing the cost of aluminum in the United States. This effort has nothing to do with helping American companies or workers but is rather strictly about lining the pockets of this Swiss company with long-standing ties to the Clinton machine. That’s right; they want to raise the cost of a cold beer this summer on American citizens to enrich billionaires in a Swiss tax-haven further.

Fortunately, the American people and the Trump Administration both understand that doing the bidding of shadowy foreign interests won’t Make America Great Again, which is why it’s so important to expose what they’re attempting to do.

One of the most critical economic achievements of the Trump administration to date has been replacing the North American Free Trade Agreement (NAFTA) – the weak, anti-American worker, Clinton era trade agreement that led to the outsourcing of over 950,000 U.S. jobs – with the pro-growth United States Canada Mexico Agreement (USMCA). The USMCA creates a real regional trading block with our neighbors Canada and Mexico, creating a North American trade powerhouse against the growing threat of the Chinese Communist Party’s plan to dominate strategic global industries – from healthcare to telecommunications to critical minerals.  The historic deal created a shared common purpose of protecting each other against the predatory actions of non-market economies like China.  U.S. business, labor unions, and even Democrats in Congress have supported President Trump’s strategy to build a North American alliance to counter the growing threat posed by the Chinese Communist Party.

All three companies pay the same Washington lawyers to lobby for them according to lobbying disclosure records. Century and Magnitude 7 also hired a PR team to create what is known in the swamp as an “astroturf” trade association called the American Primary Aluminum Association. This “association” has no employees, no annual meetings, and no trade fairs — just a mailbox in a law firm and gauzy videos of American smelter workers on its website. It has gotten little exposure aside from favorable comments from a few former politicians that have parroted the group’s “Blame Canada” narrative while purposely avoiding the facts about China, Russia, and the high cost of energy that makes U.S. smelters less competitive.

The APAA recently wrote to U.S. Trade Ambassador Robert Lighthizer in hopes of duping the Trump trade team into re-imposing aluminum tariffs on Canada – instead of China or Russia. Cloaking its arguments in carefully crafted MAGA themes, APAA claims that there has been a “surge” of aluminum from Canada and that is depressing prices in such a way that these smelters may go under and U.S. smelter jobs will be lost. Yet. actual American aluminum companies, including blue-chip Pittsburgh, based Alcoa Corp, are vehemently opposed to re-imposing tariffs on Canada and consistently state the problem is China.

This is where the audacity of these foreign trading interests becomes crystal clear if you know where to look. Glencore, one of the largest traders of aluminum in the world, stands to benefit from increased tariffs on Canadian aluminum in multiple ways. Higher prices on aluminum will mean more revenue for their U.S. subsidiary Century, massive profits for their U.S. aluminum trading business if prices go up, and a unique opportunity to claim market share in the U.S. for the Russian metal that they bought in a multibillion-dollar arrangement with Russia’s Rusal last year.

In other words, it’s in Glencore, Century, and Magnitude 7’s financial interest to persuade the Trump Administration to ignore China’s continued malfeasance and instead scapegoat Canada - No matter the damage it does to America’s national interests.

All three Swiss aluminum interests apparently expect their phony concern for the American industry will cause the Trump administration to work against its own signature trade victory (USMCA), raise prices on U.S. consumers for aluminum, and pick a fight with Canada that American companies oppose and only benefits foreign interests.

There is still time to remove the Swiss team’s fake MAGA hat and reveal how America loses if they get their way. Luckily, numerous major American companies, small-time local beer makers, Members of Congress, and major unions are speaking up against higher prices for aluminum.

I’m confident that President Trump and his team will see past the astroturf campaign and stick to working with our allies to strengthen our economy and bring back manufacturing from China. Anything less just makes foreign billionaires richer and hurts American companies and workers as we continue working to recover from an economic crisis caused by China.

Andy Surabian is a Republican Strategist and adviser to Donald Trump Jr. Previously, he served as Special Assistant to President Trump and Deputy Strategist inside the White House.