Andrew Langer
|
Posted: Jul 19, 2019 1:03 PM
Share   Tweet
The opinions expressed by columnists are their own and do not necessarily represent the views of Townhall.com. 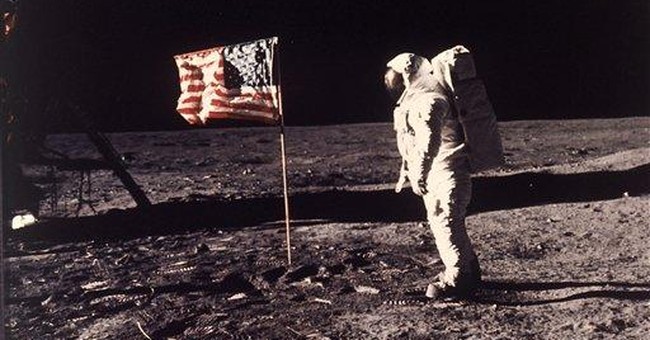 Normally, I try to steer clear of putting opinion pieces into the first person, but the 50th Anniversary of the Apollo 11 Moon Landing is enormously personal for me.  I was the kid in 5th Grade who dressed as Neil Armstrong in order to give a presentation of my report on Armstrong as one of the great “explorers” in world history.

And I find it interesting that like the trashing of the legacy of those other great explorers by today’s progressives, the singular event of man’s achievement of landing on the moon is not spared the smearing of the world’s left.   The “Gray Lady” herself, The New York Times, supposedly the gold-standard of modern journalism, couldn’t help but try and diminish the anniversary of the moon landing by putting out a pair of stories—both about the absence of women astronauts in the space corps at the time of the Apollo missions, as well as the dubious “achievements” of the Soviet Union in putting a woman, a person of color, a person from Asia, into space before the United States.  Because, of course, the politics of intersectionality are far more important than, well, actually achieving something astonishing.

I do a radio show on Saturday mornings on WBAL—a news/talk station in Baltimore, Maryland.  One of the mottos I repeat ad nauseum to my listeners is that “substance matters”—we, as a people, have to be focused on substantial achievements, especially when it comes to public policy.  That we cannot allow ourselves to be distracted by surrealistic frippery.

Fifty years ago this week, in July of 1969, America achieved something truly amazing:   we accomplished the very core mission President John F. Kennedy commanded from the floor of the US House of Representatives in May of 1961:  to send men to the moon, to land them on it, and bring them home again. Eight years and two months – a time span that we would later realize was the mere blink of an eye, in terms of mobilizing a nation to do something extraordinary.

It is astonishing that The New York Times could take a moment in which the world was almost one, an anniversary which could bring us all a little closer together, and use it instead as yet another excuse to divide us.  But then again, it is 2019… And in 2019, according to The New York Times, modern-day Russia is bad, but we're supposed to admire the "achievements" of the USSR!

Let’s be abundantly clear—the moon landing was a singular effort by a nation with an enormous mandate.  Despite incredible odds:  the need to invent new technologies, to master completely new skills, to overcome the illness, injury, and death of not just the three Apollo 1 astronauts, but other astronauts injured or killed during the course of training… despite all this, America was able to land astronauts on the moon (and bring them home again) within 100 months of Alan Shepard’s first rocket flight.

We were able to accomplish this because we did not allow ourselves to be distracted by the aforementioned surrealistic frippery.  Our scientists and engineers recognized that we needed to focus on the very real risks and tasks that were essential in understanding and accomplishing before we could land on the Moon.

This week, HBO re-released a remastered version of their incredible miniseries, From the Earth to the Moon. In the first episode, NASA Flight Director Chris Kraft, portrayed by actor Stephen Root, lays out each of the skills that NASA (and its astronauts) would need to master, in succession, before any attempt at landing on the Moon—skills like rendezvousing in space, docking two spacecraft, spacewalking, etc.   Legitimate and actual tasks that would have to be accomplished, over and over again, so that they would be like a second nature to the personnel engaging in them.

Nowhere present in any of this was someone’s political agenda.  Sure, a cynic might say that the entire moon mission was an exercise in political propaganda, that we did it to simply “show up” the Soviets (all the more reason why The New York Times shows its true colors with these twin headlines).

But that cynicism is belied by the actual achievement itself.  Beyond the technologies (both simple and complex) that were introduced to the world as the result of the Apollo program, beyond the sociological accomplishment of, for a fleeting moment, bringing billions of people around the world together in celebration, there is this singular truth:  in 1969, America launched three men into space.  They traveled from the confines of the Earth to another heavenly body.  Two of those men landed on that heavenly body, got out of their spaceship, and walked around.  They launched from that heavenly body, met up with their colleague in orbit, and the three of them returned home, splashing down back on earth several days later.

Until we send people to Mars and return them home again, this is an unassailable seminal moment in human history.  There is a time before we landed on the Moon, and there is a time after.

Those are heady words.  They’re more than a reminder—they’re a commission to all of us that substance matters.   That in order to achieve greatness, we have to focus on substantial things, and that we are all diminished when we are distracted by insubstantial political frippery.  And we cannot allow the divisive cynicism of The New York Times to diminish this “giant leap for mankind.”