Who Ya Gonna Call? How To Tackle The “Ghost Teacher” Problem

Andrew Collins
|
Posted: Mar 05, 2016 12:01 AM
Share   Tweet
The opinions expressed by columnists are their own and do not necessarily represent the views of Townhall.com. 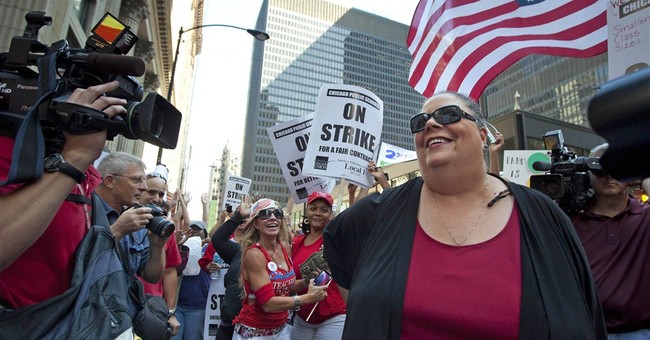 The School District of Philadelphia is haunted. Every year, some dozen or so teachers collect a paycheck from taxpayers, but you won’t find them working with students. These “ghost teachers” have disappeared to do political work for the local teachers union, the Philadelphia Federation of Teachers, never to be seen in public service again for years – perhaps even decades.

The PFT does reimburse Philadelphia’s school district for the salaries of teachers who have left their posts to do union work, but salaries are not the only cost of these teachers' absence from classrooms. Ghost teachers continue to earn a pension because they are still employees of the school district, and they continue to gain seniority even though they aren’t gaining any experience in the classroom. There’s also the cost of losing skilled teachers in a school district that is desperate for capable educators. Philadelphia schools are looking to fill nearly 200 full-time teaching positions, and the daily fill rate for substitute teachers is only about 50 percent. The opportunity cost to children of losing even 18 qualified teachers to union jobs, which is how many Philadelphia teachers never stepped foot in a classroom in 2014, can’t be counted in dollars and cents.

Both lawmakers and advocates in Pennsylvania have tried to crack down on “ghost teachers,” but so far in vain. A lawsuit brought by the Fairness Center on behalf of Americans for Fair Treatment sought to stop ghost teachers from working for the union on school time, but a judge ruled it lacked sufficient facts. Later in the year two Pennsylvania lawmakers introduced a bill to close the “union leave” loophole and ensure that public school teachers are actually being paid to teach instead of doing left-leaning political work, but under Democratic Gov. Tom Wolf it faces an uphill battle to passage.

The abuse of “ghost teachers” in Philadelphia is especially egregious, but taxpayers everywhere should be spooked because the entire country is haunted. “Release time,” as the practice is often called, is a standard operating procedure for public unions across the country. According to an estimate from Trey Kovacs, a policy analyst at the Competitive Enterprise Institute, release time has sapped about $1 billion from the federal government since 1998, and that’s not counting state and local governments, where lawmakers are often only too happy to let unions keep up their lobbying.

Only in Arizona have any “ghostbusters” succeeded in stopping public unions from abusing release time at taxpayer expense. Last year, in a suit brought by the Goldwater Institute, the Arizona Court of Appeals unanimously ruled that the Phoenix Law Enforcement Association’s use of taxpayer dollars to pay cops to stop policing and become union representatives was “disproportionate to what (the city) received in return.”

Some states have been remarkably successful in pushing back against the entrenched political dominance of public sector unions. Opposition from the left in Wisconsin against Gov. Scott Walker’s Act 10, which reformed public-sector collective bargaining to give taxpayers more power, got downright ugly. Five years later, however, the state is still functioning, unions are still free to advocate for workers, and the state has saved taxpayers an estimated $5 billion.

Scattershot victories in Wisconsin and Arizona - as well as the burgeoning right-to-work movement sweeping into states like Kentucky, West Virginia, and Missouri - are significant, but they still represent relatively small blows against public unions’ deeply entrenched political power. Unions have responded viciously to any and all attempts, however small, to curb their ability to forcibly use workers’ wages to support left-wing causes, even though public opinion consistently opposes them. Indeed, union ghosts continue to haunt government at every level, and too many elected officials still lack the political will to exorcise them.

That’s why cases like Friedrichs v. California Teachers Association, which is currently before the Supreme Court, are so important. If the court decides in the plaintiff’s favor, it will mark the first nationwide curb on public labor union’s excessive political power by giving workers the right to decide whether to support collective bargaining by their union. It would allow our public servants - teachers like Rebecca Friedrichs - to go to work with a clear conscience knowing their salaries aren’t support causes they disagree with.

For taxpayers, meanwhile, now is the time to start building momentum. If there’s something strange going on with union ghosts in your neighborhood, ask yourself: Who ya gonna call?