Amanda Stirone
|
Posted: Sep 22, 2018 12:01 AM
Share   Tweet
The opinions expressed by columnists are their own and do not necessarily represent the views of Townhall.com. 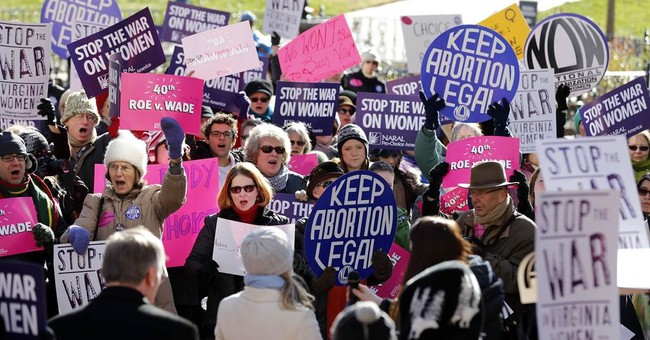 In recent weeks, Supreme Court nominee Judge Brett Kavanaugh endured three grueling days of hearings during which Roe v. Wade and Garza v. Hargan were both front and center. Members of the Senate Judiciary Committee grilled Judge Kavanaugh on what many of them saw as the all-important “right to an abortion” and whether he would uphold Roe v. Wade. A fourth day of testimony by outside groups and experts also featured Roe and Garza heavily.

In the month before Judge Kavanaugh’s hearings, Planned Parenthood and NARAL embarked on a “Rise Up for Roe” tour, visiting 10 cities across the United States in protest of Judge Kavanaugh’s nomination.  The nomination has taken a dramatic turn in the past few days but no matter how it proceeds from this point, some of the arguments raised by these abortion advocates deserves special scrutiny.

During that tour, former first daughter Chelsea Clinton pointed out that women entering the workforce “from 1973 to 2009 added $3.5 trillion to our economy” and insisted that those facts are “not disconnected from the fact that Roe became the law of the land in January of 1973.” In other words, Ms. Clinton claimed that women were able to enter the workforce because of Roe v. Wade. This argument is not unique among abortion advocates.

Ms. Clinton’s assertion requires a cynical and depressing assumption: that being mothers and pursuing educational or employment goals are mutually exclusive. In essence, Ms. Clinton is saying that in order to successfully enter the workforce, women need the ability, through abortion, to be more like men.

The argument accepts a premise that the default employee in the United States is male – never pregnant or a mother.

For generations, arguments were made that women’s inherent ability to carry the next generation made us unfit or inefficient employees. Even the United States Supreme Court weighed in on this once upon a time, stating in Bradwell v. Illinois in 1873 that women’s “destiny and mission…are to fulfill the noble and benign offices of wife and mother.” For decades, employers were able to assert that the cost of employing women once they become pregnant is unfair or unreasonable.

Roe’s solution to pregnancy discrimination is for women to stop being pregnant. The logic of Roe wants women to choose: their children or their jobs.

But history shows that the working women of America have not embraced Roe’s solution. Women, even immediately after Roe, wanted to be able to work and be mothers.

Ms. Clinton’s argument ignores that women were starting to enter the workforce in increasing numbers for at least two decades before Roe. According to the U.S. Bureau of Labor Statistics, women participated in the “civilian labor force” at a rate of 33.9% in 1950, 37.7% in 1960, and 43.3% in 1970 – three years before Roe was decided.

In fact, there is no discernible “spike” in the numbers of employed women following the 1973 Roe decision, nor is there any such spike in 1967, when Colorado enacted the first statute using the American Law Institute’s model abortion law. There is also no indication that the numbers jumped in 1971 following United States v. Vuitch. What is instead evident is a continual, gradual, increase in participation by women in the workforce starting in the 1950’s, and possibly earlier.

With the women’s movement focusing on abortion, employers managed to avoid the issues surrounding pregnancy and motherhood in the workplace.

In 1976, three years after Roe, the Supreme Court ruled in the case of General Electric v. Gilbert, holding that it was not sex-based discrimination for employers to exclude pregnancy-related disabilities from an insurance plan for non-occupational sicknesses and accidents.

Six years after Roe, in 1978, with the support of pro-life groups, Congress enacted the Pregnancy Discrimination Act, which effectively overturned that Supreme Court decision in General Electric. In passing that statute, Congress said that the United States would not permit discrimination against pregnant women and mothers who wanted to work. Roe obviously did not help those women as they fought to participate equally in the workforce; it took an act of Congress after the Roe decision.

Twenty years after Roe, pregnant and parenting women were still facing discrimination in the workplace. It took another act of Congress to guarantee protections when it enacted the Family and Medical Leave Act of 1993 during President Bill Clinton’s administration. Roe didn’t protect those women, Congress did.

That was 1993, but women employees with children are still struggling for equal treatment under the law. Women’s employment before, during, and after pregnancy has been at issue before the Supreme Court as recently as 2009 in  AT&T Corp. v. Hulteen and 2015 in  Young v. United Parcel Service, Inc.

Roe doesn’t seem to have done much for women’s workforce accommodations. If Roe were the magic bullet Ms. Clinton and abortion advocates claim it to be, these and other issues relating to women in the workforce wouldn’t have been a problem three, six, or 20 years after Roe. They wouldn’t continue to be a problem.

They do. While the federal income tax code affords individuals and couples a substantial child credit, the United States is dead last in paid maternity leave among industrialized nations and is one of the most expensive countries in the world for child care. Roe didn’t solve those problems.

So what did Roe do for women? Roe changed the conversation. The new women’s movement spent decades defending Roe as gospel, instead of advocating for accommodations so women could participate in the workforce on their own terms.

No matter your stance on the issue of abortion, we should stop pretending that Roe solved all women’s problems in every arena. It did not. It has not. And there is still a long way to go. We can all agree on that, can’t we?