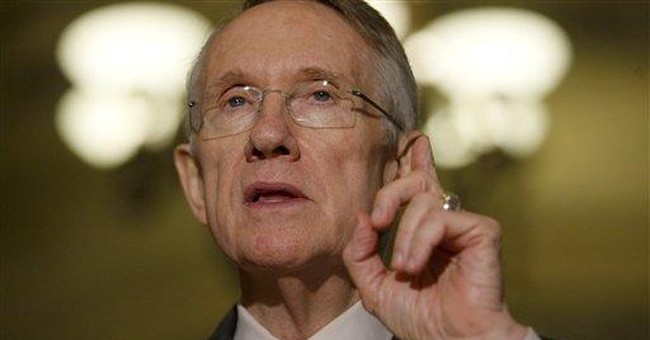 Democratic Majority Leader Harry Reid seems to be doing all he can as the Senate’s most powerful member to cause trouble for GOP presidential candidate John McCain.

Reid indicated Thursday that he will not hold any votes in the Senate on Friday so McCain has “no excuses” to skip the debate scheduled for that day.

Reid’s move is curious since several news outlets reported earlier this week that Reid told the White House it was essential McCain take an active role in crafting the bailout—something that would certainly keep McCain off the campaign trail. “We need now the Republicans to start producing some votes for us, we need the Republican nominee for president to let us know where he stands," Reid publicly told reporters.

As soon as McCain announced he was suspending his campaign and possibly postponing a presidential debate in order to get to Washington to work on the bill, Reid began criticizing McCain for doing so.

"It appears to me John McCain is trying to divert attention to his failing campaign," Reid said during a press conference Wednesday.

Shortly before McCain made his decision to return to Washington and had yet to make any statement on the bill, Reid distorted McCain’s position on the yet-to-be completed bill. “I’ve got some good news,” Reid told the press. “it appears Senator McCain is going to come out for this.”

When told by the Washington Post about Reid’s comment McCain flatly responded “I did not say that.”

Throughout the debate on the bailout package, McCain has refused to reject or endorse the plan. He has only said the final version of it must include stricter oversight standards and limits on CEO pay.