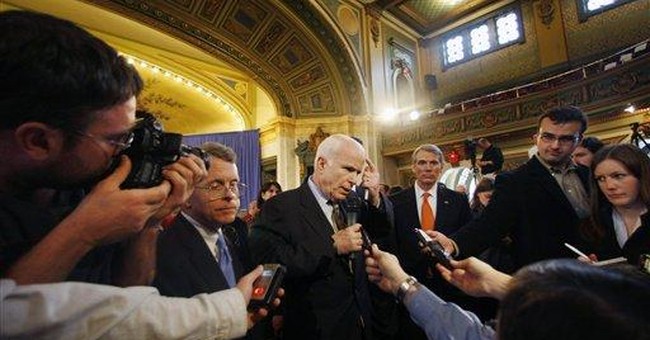 McCain confirmed he refused to shake Smith’s hand at a public hearing as told by George F. Will in the Washington Post Thursday morning.

“He [Smith] sabotaged me, my character and my integrity,” McCain told new media in a conference call Thursday afternoon. “There was no reason for me to shake his hand, he had attacked me.”

McCain said he “knew many people were observing” the exchange and “I’m certainly not ashamed or embarrassed about the fact if someone attacks my character, my integrity.”

Smith initially recounted the incident to National Review’s Byron York for a piece published July 2005 about Smith’s tenure at the FEC, which was fiercely opposed by McCain.

McCain, who sponsored campaign finance reform legislation with Sen. Russ Feingold (D.-Wisc.), has sparred with Smith over the constitutionality of the law, commonly called McCain-Feingold.