A Call for Support to Provide for the Common Defense

Allen West
|
Posted: Feb 09, 2016 10:52 AM
Share   Tweet
The opinions expressed by columnists are their own and do not necessarily represent the views of Townhall.com. 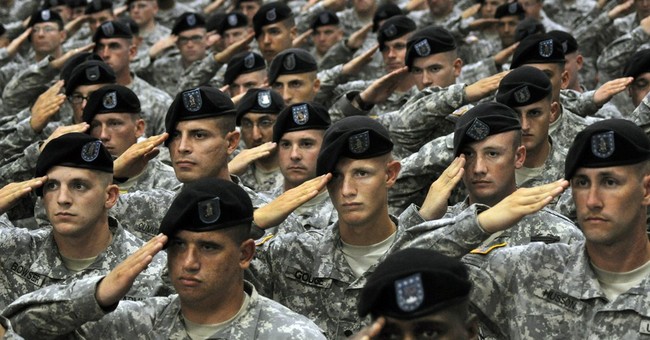 Is there any wonder why we have an exploding national debt at $19 trillion, expanding poverty and food stamp rolls, and our sailors kneeling in surrender?

Let me be very clear: I do not support the military mission of nation-building. But I also do not believe America should abdicate its role as a global leader that is capable of building strong alliances and coalitions to deter state and non-state actors, along with their aggressive and belligerent actions.

Many people are talking about the New Hampshire presidential primary contests where individuals are vying to be President of these great United States. And consistent with the primary duty of the federal government is the primary title and responsibility of the President, Commander-in-Chief of our armed forces. However, if you have been paying attention to these debates, little more than cursory soundbites and talking points have been dedicated to this vital topic. When considering the challenges facing our nation’s military, we need dedication to this responsibility.

Last week, during testimony before the House Armed Services Committee, Commanding General of U.S. forces in Afghanistan, General John Campbell, was asked by Rep. Jim Brindenstine (R-Ok) if he had authority to engage the Taliban because they are the Taliban. Gen. Campbell responded, no. In plain language, our men and women on the ground in Afghanistan are not allowed to engage the enemy - they are sitting ducks. Don’t forget that in January, we lost Army Special Forces SSG Matthew McClintock during the siege in Marjah where the Taliban surrounded our forces.

We are entering the hearing phase leading up to the development and passage of the FY 2017 National Defense Authorization Act (NDAA), scheduled for April 2016. What we have witnessed is a continuing decimation of our U.S. military capability and capacity over these past seven years. We have seen the abdication and dismissal of the most important role of our federal government.

Last year, President Barack Obama vetoed the NDAA because he wanted an increase in domestic spending. The spending levels for defense were exactly what President Obama had requested. Yet, he decided to hold our military hostage. He decided not to provide for the common defense, but rather provide more of the welfare nanny-state.

We cannot continue to allow the further devastation of an already-diminished military force to readiness levels that endanger our national security.

Now is the time for the voices of the American people to resound and be heard. The National Center for Policy Analysis (NCPA) has developed a short list of effective and affordable policy solutions to fund a capable and economically efficient military force to defend our Republic.

These are our five objectives:

1. Build a military ready to deploy, capable of defending American against terrorists and adversarial nation-states. This is a force modeled for the 21st century battlefield that is not reminiscent of the Cold War-era forward deployed force, but rather a power projection force ready to support the geographic combatant commands.

2. Reduce the growth of the Department of Defense bureaucracy. The size and scope of the defense administrative bureaucracy has expanded, while we are reducing our force in the field. Some may say this is a reflection of advanced technology, but I can attest, the most highly technical weapon on the battlefield is a well-trained and equipped American warrior.

3. Transform warfighting strategies so they do not create unnecessary risk for our men and women in combat zones. Knowing that our troops on the ground in Afghanistan are in full defense mode against the Taliban is very disconcerting and operationally/tactically unprincipled. Our rules of engagement should not deliver the initiative to the enemy.

4. Reform the military acquisition process so warfighters receive modern weapon systems on time, and most importantly, under budget. Weapon systems requirements for our military should come from our military, and reflect what they need for victory. It should not be based upon any other patronage.

5. Compensate our men and women in the military at a pay rate above the poverty level so service men and women do not have to succumb to “enlisting” for federal government subsistence, such as food stamps. It is a national disgrace how we so poorly compensate those willing to give the last full measure of devotion for our liberty and freedom.


The NCPA is proposing a viable course to achieve a fiscally responsible military that will keep America safe. Join us in this endeavor as we focus on the FY 2017 National Defense Authorization Act. Say “No” to further weakening America’s defense by going to NCPA.org and signing the petition to Provide for the Common Defense Now!