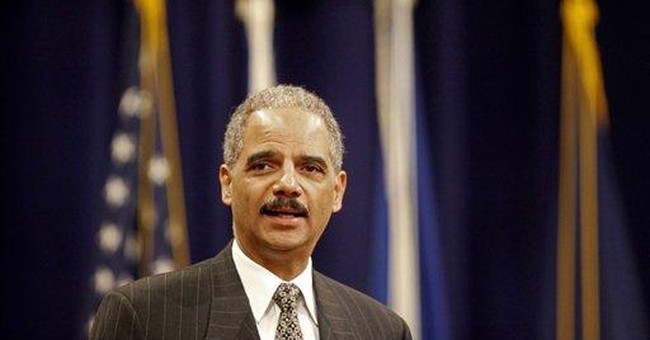 We are a nation of “cowards.” At least that is what our Attorney General, Eric Holder, wants us to believe. You and I are a nation of lions walking around in search of some c-c-c-courage in hopes of having an honest conversation about race. He is right, but has no idea why.

Holder, America's first black Attorney General, sounded off last week on the issue of race. He said, “...in things racial we have always been and I believe continue to be, in too many ways, essentially a nation of cowards.” Holder rightly cited that our workplaces, schools, and military are far more integrated than our leisure time. Monday to Friday life brings engagement and interaction, but weekends bring the old adage “like seeking like.”

Sadly, Holder offered no explanations for why this odd polarity of work life/leisure life is so. He merely attributes it to “cowardice.” In doing so, he lacks reflection and honest engagement himself. The reason for our reticence to have open, honest conversations about race with one another lies fairly near the surface. Fear – not of each other – but of the R word. Fear of being labeled a “racist.”

As a Methodist pastor for two decades, I was required to attend “sexual ethics training,” to sensitize us pastors to matters of sexual harassment, intimidation, and power. Portions of the “training” were helpful. Some portions were downright absurd and dangerous. For example, “sexual harassment” was usually defined solely as being in the eye of the receiver. There was no objective, agreed-upon definition for what constitutes sexual harassment. Rather, the trainer was content to suggest that if a woman accuses me, a man, of having crossed a boundary or stepped on her sexual sensitivity, then I have done so. Absurd and arbitrary. Such a definition places all the power on one side of the equation and gives the other person no place to stand or defend at all.

To be called a harasser or sexist renders one defenseless and likely unemployed, whether one has actually done or said something or not. How does one defend oneself against a “crime” that is defined purely by the “victim”? How does one disprove a negative? It is impossible. “If you feel like it is harassment, then it must be.” Again, absurd and purely subjective. The result: male pastors began to distance themselves in safeguarding and protective ways from female colleagues and parishioners. We had been neutralized at best; gutted at worst. Our fates lay in the hands of the women around us to determine whether our words and actions met their own particular definitions of sexism, harassment, even abuse. Absurd and capricious.

In the same way, most of America has done the same thing with the word, “racism.” The term gets thrown around willy-nilly, often without meaning or basis, but always with the same result. To be labeled a racist in America in 2009, is to embrace exile and career suicide. “Racist” is such a loaded adjective, that most Americans fear open, honest conversation that centers around race. Once you have “gone there,” you may never come back. If the “victim”, who has all the power in the definition, determines that you fit their own subjective definition of racism, you have no place to stand or defend yourself. You no longer matter – you are a “racist.” Such a burden of proof squelches open, honest conversation. Where fear prevails, curiosity and conversation end..

To be labeled a racist today sends one into an exile far worse than any other categories one can be cast in to for asking questions or countering cultural norms: homophobe, misogynist, anti-Semite, dog-fighter. One can eventually recover from all these but rarely from the label of “racist.” Think Jimmy the Greek, Al Campanis, Dog the Bounty Hunter. The term is a conversation-stopper, an argument-ender. “Racist” is the ultimate egg-shell, to be trod upon lightly if at all. Its use compares only to being the first one in a debate to use the words “Hitler” or “Nazi.” The conversation ends there.

Three recent cases in point from the political world:

1) The picket line of protestors outside the New York Post demanding retribution, even the firing of a political cartoonist, for suggesting that a chimpanzee authored the recently passed Stimulus Bill. Since the President is an African-American, some citizens evidently believe that a chimpanzee can no longer be applied to any political discourse because it could remotely be interpreted as racist. Nix chimpanzees.

2) James Clyburn, the highest-ranking African-American member of Congress, recently accused Southern governors who oppose the economic stimulus spending of indifference to the plight of poor blacks who might benefit from the federal money. Again, he leveled the charge of racism to counteract policy opposition. Nix opposition to policy.

3) John McCain and Sarah Palin were immediately labeled “racist” for suggesting that some of their opponents' policies edged toward socialism. Some observers noted that politicians in the past had used the label of 'socialist” to discredit or soil the reputations of African-American candidates. Nix the term “socialist.”

Pile up a few more of these examples, and not only will chimpanzees, policy opposition, and socialism no longer occupy spots in the national discourse, but silence and fear will dominate the arena. The result: political cartoonists and commentators will tread fearfully, and fear-mongers will squelch the free discourse and honest conversations Mr. Holder hopes to encourage.

What is needed to encourage free speech and inquiry on matters of race is a moratorium on the leveling of charges of “racism.” Individuals and societies grow and develop not by squelching honest conversation but by encouraging them. Not by hiding from opposing or offensive views but by bringing them to light and examining them, even when it is painful or difficult to do so. If we sincerely believe that all humans are created in the image of God, and therefore have dignity and value, than we will not fear or silence those who think or suggest otherwise.

As long as we choose to live in fear and silence, Mr. Holder's assessment of our cowardice will prove accurate. He does not understand why we fail to converse openly and often about matters of race, but I do. Fear.