Alan Korwin
|
Posted: Apr 21, 2016 12:01 AM
Share   Tweet
The opinions expressed by columnists are their own and do not necessarily represent the views of Townhall.com. 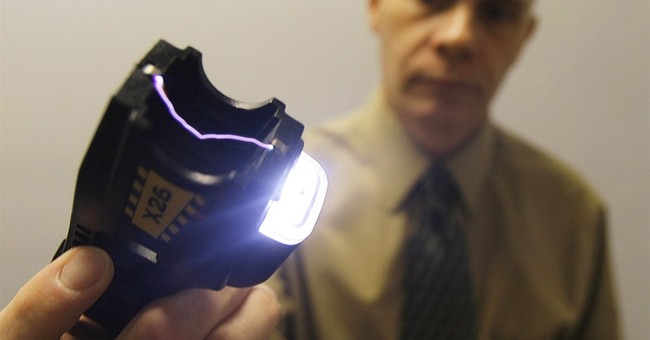 [Note: “SCOTUS” is the Supreme Court Of The United States. “Heller” refers to the D.C. v. Heller case, a defining case in U.S. firearms law.]

The Caetano Supreme Court gun decision had so many critically important features it is unfathomable it did not steal the entire news cycle when it hit on March 21, 2016. A mere shooting by a sick person in a small town does that.

The U.S. Supreme Court just handed down such a monumental Second Amendment decision—its 113th gun case—that if the mainstream media had been doing its job it would have dominated the front page for days, and devoured cable news chatter for 24 hours daily, worse than the jihad or any other minor preemption that consumes news.

The decision recognized that brutish boyfriends terrorize their women and the women can be helpless based on size and strength—except for protection the Second Amendment and weapons provide. Read that again. All eight Justices unanimously said this. They formally recognized that orders or protection, issued repeatedly against the same brute, are, in their words “futile.”

But you haven’t even heard about the Caetano v. Massachusetts case.

It basically confirms that guns are good. They protect the helpless. They have social utility. Lower courts that attempt to write this out of the law by making things up, ignoring history and legal precedent—like the Massachusetts court did—have no place in our legal system. Concocting inventions from thin air that don’t even make sense, advancing an anti-rights agenda, earned ridicule.

Even the liberal SCOTUS Justices all joined the decision. This is news. It’s big news. It’s monumental. Where are the talking heads? The fact that it has been broadly suppressed by the very organization responsible for telling you—The United States journalism profession acting in concert—demonstrates the astonishing bias that infects the nation’s culture and “news” media. This is proof.

If news like this proliferated as it should, you and the nation would be bombarded constantly with the good side of guns, the side that keeps streets safe, the idea that people who are armed can protect themselves, and do all the time just like Jaime Caetano did. It’s the plan the Founders gave us, that has made this the greatest nation the world has ever known. The failure of reporters, producers, editors, news directors and publishers is unaccountably grave. Look at what this case contains.

Ms. Caetano’s boyfriend beat her up so severely (the lower court called it a “bad altercation”) she was hospitalized. This was after she got multiple restraining orders against the thug, which the Supreme Court called “futile.” When a friend offered her a stun gun for self defense against the brute, she took it. “It’s a good thing she did,” the Supreme Court’s finding reads.

That’s because, as the Court tells us, one night when she was leaving work, her ex-boyfriend was laying in wait for her, came out and, screaming, threated her. He was nearly a foot taller and 100 pounds heaver than she. Here’s an extract:

But she didn’t need physical strength to protect herself. She stood her ground, displayed the stun gun, and announced: “I’m not gonna take this anymore... I don’t wanna have to use the stun gun on you, but if you don’t leave me alone, I’m gonna have to.” The gambit worked. The ex-boyfriend “got scared and he left her alone.”

You don’t think it’s news that our U.S. Supreme Court made this public? Put it in their unanimous decision?

Next the Court points out that, “It is settled that the Second Amendment protects an individual right to keep and bear arms” and that this right vindicates the “basic right” of “individual self-defense.” Leftists and hoplophobes (people with morbid fear of guns) can make their bogus arguments, but there’s the truth.

The High Court stated: “By arming herself, Caetano was able to protect against a physical threat that restraining orders had proved useless to prevent.” It’s front page news: “Flash! SCOTUS announces: Guns beat orders of protection! Read all about it!” Instead? Crickets.

Under Massachusetts law however, even though Jaime may have saved her life, her possession of the stun device was illegal, so when police found it later she (not the guy) was arrested, tried and convicted.

To make it stick, the local courts bent over backwards, inventing the argument that, because stun guns didn’t exist in 1791 when the Bill of Rights was ratified, it wasn’t “eligible for Second Amendment protection.” They had unwritten what the Supreme Court had written. She was imprisoned.

The Supreme Court had to take this case to prevent inferior courts from removing the scrotum from SCOTUS. That’s partially why it’s unanimous—the lower court was thumbing its nose at the system. (You can almost hear the liberal Justice’s bemoaning, ‘Why’d it have to be guns?’) Vulnerable individuals like Caetano who must defend themselves because the State will not.

“This reasoning defies our decision in Heller, which rejected as ‘bordering on the frivolous,’ the argument ‘that only those arms in existence in the 18th century are protected by the Second Amendment.’ The decision below also does a grave disservice to vulnerable individuals like Caetano who must defend themselves because the State will not,” Justice Alito wrote, slapping them in his concurrence.

Years of history between this woman and her abusive partner are outlined in the 12-page decision. In typical elitist fashion, while state law denies non-lethal stun guns to the public, it grants them to the king’s men, also called officials and peace officers.

Massachusetts argued further that Caetano must be guilty because stun guns fall within the “traditional prohibition against carrying dangerous and unusual weapons.” But, as SCOTUS notes, “Although the Supreme Judicial Court [of Mass.] professed to apply Heller, each step of its analysis defied Heller’s reasoning.” There was no limit to that lower court’s hubris—Heller emphatically rejected accepting only arms in existence in the 18th century: “the Second Amendment extends, prima facie, to all instruments that constitute bearable arms, even those that were not in existence at the time of the founding.” Massachusetts just ignored the rule of law, and cited an unrelated case.

SCOTUS emphasized that “the Second Amendment accordingly guarantees the right to carry weapons ‘typically possessed by law-abiding citizens for lawful purposes,’” and that this “is true for the weapons most commonly used today for self-defense, namely, revolvers and semiautomatic pistols.” Front page news. “SCOTUS Declares: Top Self-Defense Weapons Are Revolvers And Semi-Autos!” More crickets.

When Massachusetts tried to justify its assault on the right to bear stun guns, using a “dangerous and unusual” ploy, the High Court saw right though it and would have none of that either. First, as they point out, it is a conjunctive test, both conditions must apply, and the state’s effort to apply them separately had to fail. But more to the point, as Alito writes, “If Heller tells us anything, it is that firearms cannot be categorically prohibited just because they are dangerous.” The case notes that “virtually every covered arm would qualify as ‘dangerous.’” So you can see what that lower court was trying to do—outlaw everything—and why the Supreme Court had to step in and slap some sense into them.

Piling it on, the Massachusetts court also tried to ban stun guns saying they had no usefulness in warfare. The Supreme Court dissolved that by listing all the militia uses the devices have in suppressing insurrections and riots (a constitutional function, they note) and listing branches of the armed services that have requisitions and training for stun weapons to “incapacitate a target without permanent injury or known side effects” (with fascinating reading at the many links they provide).

The lower court’s argument that guns outnumber stun weapons is brushed aside as pointless drivel, and besides, “Otherwise, a State would be free to ban all weapons except handguns, because “handguns are the most popular weapon chosen by Americans for self-defense in the home... While less popular than handguns, stun guns are widely owned and accepted as a legitimate means of self-defense across the country. Massachusetts’ categorical ban of such weapons therefore violates the Second Amendment.”

“The reasoning of the Massachusetts court poses a grave threat to the fundamental right of self-defense.”

The conclusion is too good to paraphrase (citations omitted):

The Supreme Judicial Court suggested that Caetano could have simply gotten a firearm to defend herself. But the right to bear other weapons is “no answer” to a ban on the possession of protected arms. Moreover, a weapon is an effective means of self-defense only if one is prepared to use it, and it is presumptuous to tell Caetano she should have been ready to shoot the father of her two young children if she wanted to protect herself.

Courts should not be in the business of demanding that citizens use more force for self-defense than they are comfortable wielding.

Countless people may have reservations about using deadly force, whether for moral, religious, or emotional reasons—or simply out of fear of killing the wrong person. I am not prepared to say that a State may force an individual to choose between exercising that right and following her conscience, at least where both can be accommodated by a weapon already in widespread use across the Nation.

A State’s most basic responsibility is to keep its people safe. The Commonwealth of Massachusetts was either unable or unwilling to do what was necessary to protect Jaime Caetano, so she was forced to protect herself.

To make matters worse, the Commonwealth chose to deploy its prosecutorial resources to prosecute and convict her of a criminal offense for arming herself with a nonlethal weapon that may well have saved her life. The Supreme Judicial Court then affirmed her conviction on the flimsiest of grounds.

This Court’s grudging per curiam now sends the case back to that same court. And the consequences for Caetano may prove more tragic still, as her conviction likely bars her from ever bearing arms for self-defense.

If the fundamental right of self-defense does not protect Caetano, then the safety of all Americans is left to the mercy of state authorities who may be more concerned about disarming the people than about keeping them safe.