The Electoral College Isn't the Problem: It's Our Education

Adam Carrington
|
Posted: Dec 07, 2017 11:27 AM
Share   Tweet
The opinions expressed by columnists are their own and do not necessarily represent the views of Townhall.com. 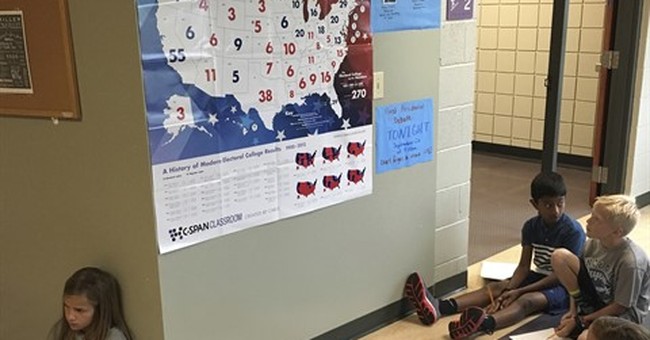 This latter offender originates not in Moscow but in Article II of the U.S. Constitution. Through the Electoral College, a winning presidential candidate need not obtain the most votes nationally, as the 2016 election showed. Instead, he only must garner a majority of electoral votes, which the Constitution distributes proportionally among the states according to each one’s congressional representation.

While some seek to scrap the system entirely, others wish to modify it. Modification is the easier route. The Constitution leaves it up to states to decide the manner by which they will allocate their electoral votes. Presently, all but two states allocate all of their electoral votes to the persons receiving the most popular votes in their state. Professor Lawrence Lessig, who teaches at Harvard Law School, announced recently that he will seek to change that winner-take-all system. But instead of appealing to the states, Professor Lessig believes this modification can come through a challenge before the Supreme Court.

Lessig argues that a winner-take-all system violates the Fourteenth Amendment. In particular, he claims it goes against the concept of one-man, one-vote. A presidential candidate can win a state by a fraction of a percent but still get 100 percent of the electoral votes. Lessig argues that this practice is fundamentally unequal, as half (or less) of the people get all of the state’s Electoral College representation, while the rest get none.

From one angle, this argument makes sense. Our polity stands on the “self-evident proposition that all men are created equal.” Why would our election process not mimic that proposition in allocating votes?

One answer to this question involves reclaiming a fuller view of our Constitution’s purpose. For the Founders, the Constitution accomplished two tasks. On one hand, it established a government based upon the consent of the American people. Therefore, the government operating within the Constitution should respond to the will of that people. To so respond, elected officials should bear a close resemblance to the choice of American citizens.

On the other hand, the Founders did not believe the people flawless. “If men were angels,” James Madison famously said, “no government would be necessary.” Instead, the people could fall prey to their wrongful passions, acting impulsively against their own interests and against the rights of particular individuals. To counter these tendencies, the Founders did not set up a system that merely reflected the people’s will at any particular time. Instead, they constructed a system which took the people’s will and required that will through it. That system then strained the people’s will through modes that at times refined, at others even checked, majority desires. The process did not negate popular will but made it more deliberate, more moderate, and thus more aligned with the rights of individuals and the common good.

In our debates over the Electoral College, we lose sight of this second purpose. For this institution seeks to refine the people’s vote, not just reflect it. It does this in several ways. First, it allows participation by the states as states, thus giving them an outlet to protect their interests. Second, the Electoral College forces candidates to consider the interests of a broader section of the country. Yes, the candidates often focus on a few toss-up states. But those states often contain demographics that demand attention to otherwise-ignored sections of the country. Third, the winner-take-all approach in particular, along with the requirement that a candidate receive a clear majority of electoral votes, reinforces the two-party system. Though that system can sometimes frustrate us as voters, it encourages political organizations and candidates to build broad coalitions. And those broad coalitions, as Federalist 10 tells us, often get closer in their principles to the nation’s common good.

Therefore, we should abstain from venting our partisan frustrations on foundational political institutions such as the Electoral College. Instead, we better spend our time pursuing to further inculcate the goods it seeks:  a refined popular will based on the common good and on the protection of individual rights. We should see the Electoral College and like institutions not as barriers to popular government but as aids to its best manifestation. To do so will require more than allowing the Electoral College to continue to operate every four years. It will require a renewed education in the genius of our Founding fathers and a dedication to abiding by their wisdom.

Adam Carrington is an assistant professor of politics at Hillsdale College