Adam Carrington
|
Posted: Oct 31, 2017 7:46 AM
Share   Tweet
The opinions expressed by columnists are their own and do not necessarily represent the views of Townhall.com. 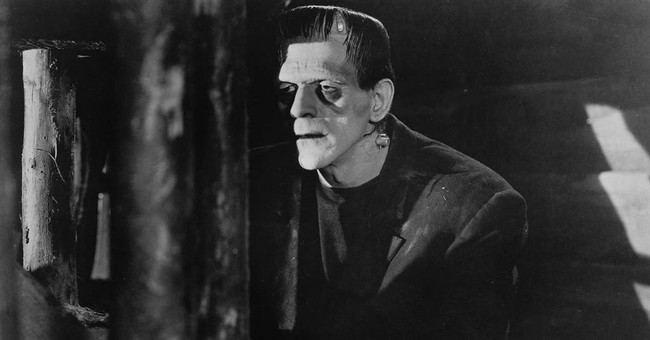 We often pick Halloween costumes to say something true about ourselves—our personality, desires, and interests. If we were to give a costume for our national government, what would it be? Some might suggest a money-pit, a wish-granting fairy god-mother, or a swamp monster. But I would suggest another costume, one the national government need not spend lavishly on as: Frankenstein’s monster.

In many ways, it would go as itself. The national government now operates as a mash-up mutant of two systems – and comprehending the nature of and disconnect between these two systems can help us understand our current dysfunction.

The first system—one set of the monster’s body parts--we find in the United States Constitution. That document establishes a government built on the theory of separation of powers. Government, the framers believed, does not wield power. It wields powers. Each based in the rule of law, a government’s functions include the distinct actions of making law, enforcing law, and interpreting or expounding upon law. The first three articles of the Constitution create separate institutions and vest each one with one of these functions. Furthermore, in the process of creating them, the Framers took care to construct each branch to better wield the power vested in it.

Thus, Congress, since the Constitution vests it with legislative power, is built to better make laws. It contains two chamber with different terms, age requirements, and bases of support. Within those chambers, persons with different areas of knowledge from different areas of the country all introduce, debate, and vote upon legislation. The structural apparatus makes it capable of good deliberation. And for the Framers, good deliberation leads to better legislation.

The presidency, since the Constitution gives that office executive power, is constructed with enforcement of law in mind. Unlike Congress, the presidency is unitary. With only one person occupying the office, it allows for energetic, decisive, and speedy action—just what we should desire in enforcing law.

Finally, the courts receive the judicial power. This power lends itself to deep knowledge of the intricacies of law and legal procedure. It requires judging claims made against and for the law between parties. The courts therefore contain judges with lifetime tenure, allowing them to build up the knowledge and experience in the law needed to exercise their office well.

In the late 19th and early 20th century, a movement took shape that criticized this system as outdated, cumbersome and harmful. Known as the progressive movement, its adherents proposed a new structure—a distinct set of body parts—to replace the old one of the Constitution. This system separated government action as well. However, its division distinguished a realm of politics from that of administration. Politics involved the legislative and executive branches. They would help express the broad will of the American people—demanding vaguely general policy objectives such as clean air or safe streets. Administration involved a career bureaucracy, who would take those broad policy objectives and fashion them into concrete governmental action. In so doing, these bureaucrats would act upon their expertise, making regulations, enforcing them, and adjudicating disputes regarding them—in other words, exercising together all three of the powers separated by the Constitution.

Presently, our national government contains both systems, a combination every bit as revolting as the monster of Mary Shelley’s literary imagination. Its ugliness lay in its malfunction, with the progressive system cruelly disfiguring the Constitutional one. Our Frankenstein’s legislature has spent generations delegating its legislative authority to either the executive branch or to the bureaucracy. Because of this gradual surrender of power, Congress no longer has nearly as much of substance to legislate. And even when it does, Congress no longer knows how to do so. It lost the practice of crafting and debating bills a long time ago. Now it writes major legislation in a hurry and behind closed doors. These recent bills usually resemble another Halloween favorite, The Blob, filled with incoherent and sometimes contradictory language. Even when passed, these bills often leave most of the major decisions to bureaucrats.

The presidency also suffers greatly from this mash-up, becoming its own monster within a monster. For one, much of the policy work a president does now comes from the use of executive orders, instead of his constitutional role of recommending legislation and signing or vetoing bills. His power to use these orders flows from Congress’s delegation of legislative power to him. But rule by executive order invites a tennis ball approach to policy—with many of President Trump’s major policy actions consisting of unilaterally undoing many of President Obama’s unilateral actions, which a future president may then redo—unilaterally. This looks more like rule by fiat than by law.

What’s more, the bureaucracy increasingly runs apart from—and often times now antagonistically to—the will of our chief executive. Many complaints about a “deep state” stem from this problem of unelected career bureaucrats who continue to operate according to their own views, regardless of who occupies the West Wing. While the bureaucracy can thwart a president’s agenda, it can also change the way that agenda manifests itself. Eliana Johnson recently discussed President Trump’s overwhelming focus on issues such as respect for the national anthem and saying “Merry Christmas” instead of pushing for immigration, health care, or tax reform. In part, the desire of his core supporters as well as his own comfort zone drives this focus. But part of it also stems from how much policy and its execution now stand outside of a president’s grasp. In fact, Americans’ decision to elect a president less interested in policy than in social media, entertainment, and cultural-symbol battles shows how much they intuitively realize this point: Significant amounts of power remaining in the office lay not in policy but in a kind of virtue-signaling.

Therefore, this Halloween, as we trick or treat, let every Frankenstein be a reminder to us of Washington, D.C. If the national government is going for a scream, it should remember: the scariest costume it could go as is itself.