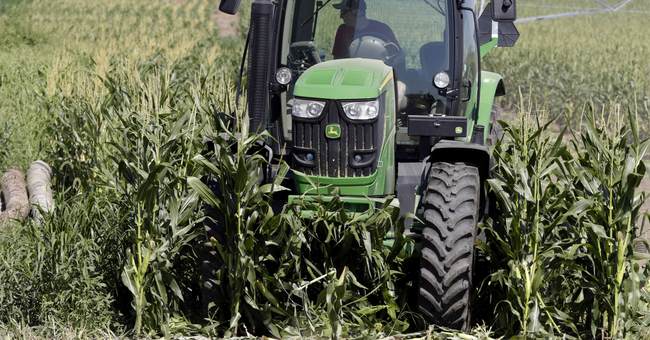 A level playing field — that’s what American farmers need to be successful, and that’s all that they’ve ever asked for. President Trump understands this, and he’s delivering.

Throughout Donald Trump’s presidency, Democrats and the chattering classes have tried — and failed — to use the trade negotiations with China to drive a wedge between the President and farmers. Now that President Trump has achieved a historic breakthrough, those farmers are on the verge of an enormous payday that will more than compensate them for the role they played in pressuring Beijing into submission.

In 2016, candidate Trump promised to right the wrongs that resulted from decades of ineffective trade policy with China and secure a genuinely fair deal for all Americans. The “Phase One” deal the President signed in January represents the first major step toward achieving that goal. It’s a win for rural America and for a way of life that helped to build this country.

Thanks to the President’s deal, China has pledged to purchase $200 billion worth of American goods in exchange for relief from the counter-tariffs on their goods. At least $40 billion of that will go toward purchases of agricultural products, allowing farmers to double their exports to China. The same farmers who were most critical to the economic pressure campaign against China, particularly soybean producers, will benefit the most from this provision, more than offsetting the temporary costs associated with bringing Beijing to heel.

As a believer in free trade and free markets, I admit that I was initially skeptical of President Trump’s use of tariffs. However, three years into his administration, it’s clear that the President uses these pressures to achieve more open trade. We’re not imposing tariffs for their own sake; instead, we’re using them to tear down other countries’ trade barriers and build up American farmers and workers.

Our farmers have invested in this approach, understanding that the short-term pain they might experience would be worth it for the long-term benefits of a fair and comprehensive trade agreement with China. Yesterday’s status quo let China get away with blatantly ripping off American workers, farmers, and businesses. The counter-tariffs were necessary to secure a fairer deal for America, and a recent Iowa State University survey confirms that farmers explicitly recognize this reality.

President Trump, for his part, never lost sight of the sacrifices American farmers were making for the country, doing everything in his power to help agricultural communities weather the storm until he could deliver the results he had promised. And boy, did he deliver results! The Phase One agreement is a big win.

China’s abusive trade practices have been a thorn in America’s side for decades, and previous leaders failed miserably to address this challenge. China has enjoyed unfettered access to America’s markets while manipulating its currency and illegally subsidizing domestic industry. Chinese steelmakers dumped goods on the world market to drive American steel producers out of business, and Chinese firms systematically disregarded American intellectual property rights.

Fixing the problem was never going to be a simple matter. It took leverage to get this far, and it will take more work to pressure China to go the rest of the way toward conforming to the rules of international trade. Farmers have demonstrated impressive patience over the past three years to give our country that leverage, and their patriotism is now being rewarded. Now we can move on to Phase Two.