Why We Must Restrict Chinese Nationals From Studying STEM in US 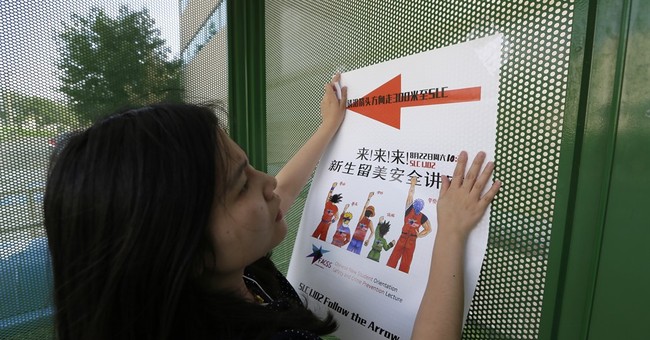 Source: In this photo made Saturday, Aug. 22, 2015, Ailu Xu, a graduate student from China, posts a sign directing Chinese students to a new student orientation meeting at the University of Texas at Dallas in Richardson, Texas.AP Photo/LM Otero

Earlier this week, I suggested that the United States restrict Chinese nationals from studying advanced scientific and technological subjects in our country. My suggestion prompted a torrent of abuse from the media.

“It’s hard to know what triggered Cotton’s rant,” Catherine Rampell complained in The Washington Post, resorting to ad hominem cries of “xenophobia” while ignoring the crux of the matter. Not until the final paragraph did she even acknowledge the risk of Chinese espionage, blithely suggesting that we simply “prosecute such crimes.” I suppose Rampell has missed years of FBI warnings about Chinese espionage, so let me add some context.

Around 370,000 Chinese nationals are studying in the United States. Nearly half are studying in scientific and technological fields. According to a White House report, the Chinese government pressures some of these students into becoming “non-traditional information collectors that serve Beijing’s military and strategic ambitions”—put less politely, “spies.”

The scale of China’s espionage is a huge challenge. The FBI is investigating a thousand cases related to China’s theft of intellectual property across the country. The Chinese military has sent at least 500 military researchers to the United States, often under false identities.

For example, last year federal officers stopped a Chinese student named Yanqing Ye at Boston’s Logan International Airport. Ye studied at Boston University’s Department of Physics, Chemistry, and Biomedical Engineering, but her interests weren’t strictly academic. She admitted under questioning that she was a lieutenant in China’s military, the People’s Liberation Army. During Ye’s two-year stint in our country, she allegedly researched U.S. military projects and compiled dossiers on U.S. scientists at the direction of a PLA colonel.

I have a bill to crack down on Chinese espionage by denying visas to individuals employed or sponsored by institutions associated with the PLA. But more is needed, specifically, a broader reexamination of academic exchange between our two countries, especially for STEM students at the graduate and postgraduate levels.

If Chinese nationals wish to study subjects that can improve China or the United States without strengthening the Communist Party, we ought to welcome them. But of course, the last thing Chinese communists want their people studying and bringing home is The Federalist Papers. As is more common, though, if Chinese nationals wish to study advanced scientific and technological fields with military applications, we should no longer admit these “students.”

China apologists and globalists may object, but their arguments don’t hold up under scrutiny. Some argue that “brain drain” isn’t a serious problem, citing studies that most Chinese PhD graduates stay here for years after finishing their degree instead of returning to China. But other reports suggest that nearly all Chinese graduate students in scientific and technological fields return home. Whatever the actual numbers, the hard fact of China’s espionage and technology theft remains. And how many of those researchers who stay do so to steal our research and advanced technology?

Others argue that we can’t restrict Chinese nationals because there aren’t enough trained Americans to staff our laboratories. If so, it’s a national embarrassment that we depend on our chief enemy for scientists and engineers, not a justification for continued dependence. It should spur efforts to train more American students in these fields. As a last resort, if we face a shortage of highly skilled talent, we should welcome the citizens of our allies, not our enemy. No doubt India, Taiwan, South Korea, and Japan would welcome the opportunity.

Finally, others argue that restricting what Chinese nationals can study violates the spirit of openness and collaboration that characterizes our higher-education system. To which I can only say: don’t be naïve. Like a turtle on a fencepost, a Chinese national doesn’t get into our most advanced labs by accident. Besides, this argument comes mostly from colleges and universities that have allowed themselves to become financially dependent on full-freight tuition payments from Chinese students—who in turn are subsidized by the Chinese government.

Recommended
'Completely and Utterly Messed Up': Minneapolis Man Dies After Officer Kneeled on His Neck For Several Minutes
Matt Vespa

But this objection, while wrong, gets at the crux of the problem. We want to protect our free research system from an unfree adversary that exploits our openness for military and industrial advantage. The United States has responded to similar threats in the past by restricting what students from such nations can study. Scientific exchange between the Soviet Union and the United States was highly restricted; even then, there was vigorous debate about whether this exchange posed an unacceptable risk to the United States. More recently, President Obama signed legislation barring Iranian students from studying fields related to nuclear weapons. I don’t recall accusations of xenophobia and racism directed at him.

China is our enemy. The Chinese Communist Party aims to displace the United States as the world’s preeminent economic and military power. We ought not to aid that ambition. Yet that’s exactly what we’re doing when we open our most advanced labs and fields of studies to Chinese nationals. Let’s not be the proverbial capitalists who would sell the rope the communists will use to hang us.