The Four Hard Lessons of Campaign 2008 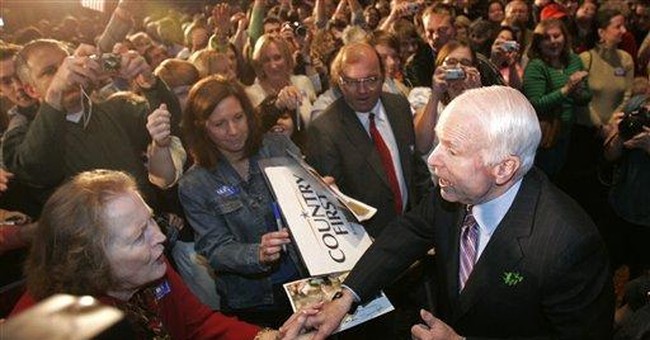 In the wake of stinging defeats in this year’s presidential and congressional elections, Republicans are now engaged in the difficult work of finding the way forward. Their mission is simple, but not easy: To rebuild their party’s brand by reworking and re-presenting its principles in a way that retains the indispensable – a commitment to liberty and justice for all – while developing fresh ideas, and fresh faces to articulate them. A painful but necessary part of the process also requires Republicans to identify and correct mistaken assumptions operative in the 2008 presidential campaign.

From the McCain campaign, it is possible to draw solid conclusions about what doesn’t work for Republicans. In the spirit of learning from the past to avoid repeating it, it’s worth reviewing some of the lessons of 2008.

1. It is impossible for any Republican presidential candidate to garner favorable mainstream media coverage, so long as s/he represents the more socially conservative electoral choice.

Certainly, the media’s swooning adoration of Barack Obama was unprecedented, and may in part have been attributable to the historic nature of his candidacy. But given that John McCain was once the most popular Republican with the press (and even jokingly referred to journalists as his “base”), he might reasonably have expected something more than the unremittingly hostile coverage that the mainstream media served up – even as his opponent enjoyed a largely free ride.

But here’s the fact: So long as Republicans represent the party of social conservatism, the press will always favor their opponents. John McCain’s popularity peaked when he was a competitor to (or thorn in the side of) the more socially conservative George W. Bush. Even this year, The New York Times’ primary endorsement of McCain represented nothing more than an effort to support him over the more vocally conservative Mitt Romney. As soon as McCain won the nomination – and became by default the most socially conservative choice for president – The New York Times unloaded all over him, bookending his campaign with a shoddily researched report on his alleged affair with a lobbyist and an ugly, deeply personal attack piece on his wife.

Going forward, Republicans must find a way to overcome the press bias favoring the more socially liberal candidate. Strategies for reaching over the heads of the mainstream media – whether by establishing an internet presence for the GOP, working more closely with talk radio, or crafting strategies to offer candidate interviews or breaking news to favorable (or at least fair) news outlets – must be among the party’s first order of business.

2. Campaign finance “reform” will always have a disproportionately negative impact on Republicans.

In one of politics’ great ironies, the campaign finance reform legislation that John McCain created ultimately crippled his campaign (especially after Barack Obama broke his word and declined public financing). Given the press’ liberal leanings, laws that stifle competing voices have a disparate – and negative – impact on Republicans, who need independent campaigns to counter the media’s influence and get the conservative message out. Unfortunately, McCain-Feingold has inhibited independent campaigns, thereby enhancing the press’ position as the dominant provider of political information to voters.

3. Republicans can’t win over Latinos through appeals on the illegal immigration issue.

John McCain never regained the support among rank-and-file Republicans that he squandered by his advocacy of McCain-Kennedy immigration “reform,” which would have effectively offered amnesty to millions of illegal immigrants. Whether or not it proved decisive in his defeat, the lack of enthusiasm among the base certainly hurt McCain.

So what did he gain politically from his advocacy of the “path to citizenship”? Not much. In fact, 67% of Latinos backed Barack Obama. Latino immigrants favored Obama by a 78% margin, lending crucial support in states like Indiana, Virginia and North Carolina. The moral of the story: Republicans will never be able to win over Latinos by aping Democrat positions on illegal immigration. Democrats support legalizing poor and under-educated people already in this country in the hope that they will become new clients of an expanded welfare state, and hence reliably Democratic voters. Mimicking liberal enthusiasm for legalizing illegal immigrants only puts Republicans in a perpetual “me too but less” posture that ultimately gains them nothing.

Certainly the GOP must do more to make sure that Latinos understand that their opposition to illegal immigration has nothing to do with hostility either to immigration in general or Latinos in particular; rather, it is about honoring the rule of law. But even more importantly, along with continuing their support for the traditionalist social positions embraced by most Latinos, Republicans need to explain why economic freedom and small government will do more than government handouts to help hard-working and upright new citizens achieve the American dream.

If Latino outreach becomes nothing more than a bidding war over government benefits, the Democrats will always win. What Republicans need to find is a message that helps the debate break out of that box – and the communicators to deliver it effectively.

4. “Mavericks” end up leading a party of one.

For almost his entire Senate career, John McCain prided himself on his status as a “maverick.” In doing so, however, he alienated a good number of regular Republicans who would have contributed more and worked harder to elect a candidate about whom they were more enthused.

“Mavericks” like McCain seek and welcome the support of independents. Unfortunately for McCain, however, independent voters are the ones who are most driven by events, rather than ideology. Had he run at the end of the tenure of an unpopular Democrat president, McCain might have been fine. Instead, he was left with a base that was more excited about its vice-presidential nominee than the presidential one, and a horde of independents who – in light of the financial crisis and the long, unpopular tenure of President Bush – decided to take a chance on “change.”

Whatever the flaws in the conception or execution of his campaign, certainly John McCain is a brave and honorable man who has served his country with distinction. Perhaps even in defeat, he may likewise do his party a service – if its members can learn the hard lessons his loss has taught all of us this year.