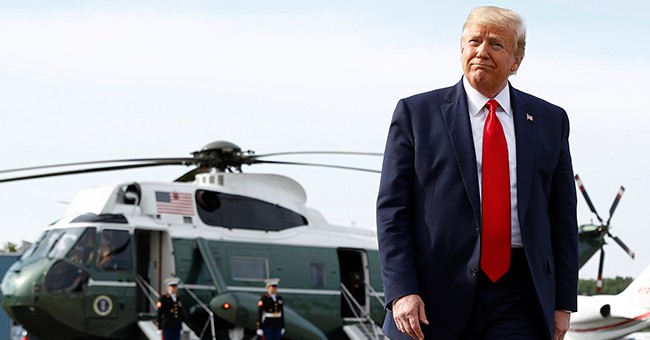 The Democrats are pretty desperate to beat President Donald J. Trump in 2020. He just packed a stadium in New Hampshire last week. His crowd attendance broke the previous record set by the world-famous singer, Elton John. With stats like that, leftists are going to try just about anything to convince the American voters that the president is unfit for the job. Their latest strategy? Claiming "The Donald" is addicted to Twitter.

The Daily Beast reports that the Center for American Progress has been telling candidates the best way to beat Trump is to frame him as ineffective. The group says the easiest way to show the cause of his ineffectiveness is to blame it on his Twitter.

One of the party’s top think tanks has been privately encouraging lawmakers and candidates to attack the president for failing to deliver on the promises he made because he’s too consumed by social media. It is, undoubtedly, the first case of a campaign tactic geared towards turning a president’s online behavior into a liability; though rarely has a president’s reliance on—and use of—a media bullhorn been such a defining personality trait. Those pushing it have offered new polling data to bolster the idea that the argument will move voters.

Indeed, Navin Nayak, executive director of the Center for American Progress Action Fund, told the Daily Beast that he thinks "only the hardest core Trump believers think he should spend more time on Twitter. But that is the reality of his presidency. For better or worse people think he spends most of his time on Twitter and the way he engages on it is mostly negative."

"Juxtaposing that becomes a very powerful way of underscoring how he has not accomplished anything economically for the American people," Nayak added. "Going after that is an effective way of attacking Trump without impugning the motives of anyone who voted for him."

True, the president tweets a lot. But the idea he hasn't been effective in the real world doesn't really add up. He's basically reshaped the judiciary, deregulated massive parts of the economy, and has had consistent real wage and job growth throughout his presidency. Likewise, Trump's Twitter feed does a lot of good for the presidency. He's pretty funny on it.

Leah covered his latest joke on Twitter in regard to Greenland: