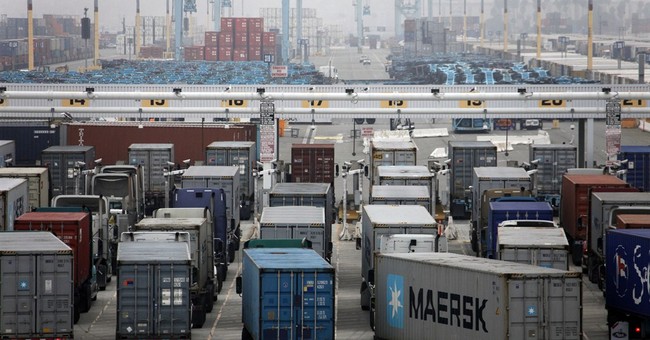 The American Trucking Associations (ATA) released new data this week showing a shortage of truck drivers has grown to historic proportions at the same time a supply chain crisis continues to spread just ahead of the busy holiday shopping season.

According to ATA, the trucking industry will be short 80,000 truck drivers by the end of 2021, a problem that could double to a shortage of 160,000 drivers by 2030. ATA attributes the shortage to a number of issues, including the Wuhan coronavirus pandemic that slowed or stopped training programs and DMV licensing of new drivers along with an increased number of retirements among its aging workforce.

Another issue highlighted by ATA is infrastructure, or a lack thereof, that limits truck drivers' abilities to maximize productivity. Making matters worse is Biden's vaccine mandate, something the ATA recently warned would make the driver shortage even worse as "many drivers will likely quit rather than get vaccinated."

"The American Trucking Associations...warned the administration last week that many drivers will likely quit rather than get vaccinated, further disrupting the national supply chain at time when the industry is already short 80,000 drivers." https://t.co/Wm7EEVybkn

What's the Biden administration doing about those issues? According to their infrastructure bill, they're not taking the actions that would help. Instead of roads and bridges, as Townhall has covered, Biden's idea of infrastructure is woke legislation designed to insert "equity" while demonizing the "dirty" industries that made America an economic juggernaut with Green New Deal policies that will further undermine the current transportation system.

In the name of "environmental justice," Biden isn't finding room to accommodate truck drivers' needs. For example, instead of beefing up the infrastructure that provides locations for truck drivers to pull off on long-haul trips to sleep, he's working toward making electric vehicle charging stations as ubiquitous as gas stations.

So far, the most the Biden administration has done, supposedly with the help of Transportation Secretary Pete Buttigieg, is to convince the twin ports of Los Angeles and Long Beach to move to 24-hour operations — but that won't solve the supply chain crisis that's led the White House to mock Americans whose Christmas gifts are delayed or grocery store shelves are empty. Offloading ships faster doesn't get the goods to stores if there aren't any trucks to deliver the goods from ports to distribution centers or onward to stores and homes.

A shortage of 80,000 truck drivers is wreaking havoc on the supply chain—and it’s about to get worse https://t.co/Memu1VcAS5

As Townhall covered earlier in the crisis as it spread from America's Pacific coast to the Atlantic at the Port of Savannah, port authorities are having to find off-site locations to store containers and cargo because offloading isn't the problem, trucking inland is.

President Biden claimed in a recent CNN town hall that he was "absolutely" looking into using the National Guard to transport goods, but that notion was quickly dispelled by his own White House aides who had to correct his statement saying "Requesting the use of the national guard at the state level is under the purview of Governors and we are not actively pursuing the use of the national guard on a federal level."

Now as the supply chain situation continues to worsen, President Biden and most of his cabinet — including Secretary Buttigieg — are in Europe to negotiate a new climate deal while Jen Psaki is left to laugh off the crisis as little more than "the tragedy of the treadmill that's delayed."

Tonedeaf moment as Psaki jokes about the supply chain crisis:

"The tragedy of the treadmill that's delayed." pic.twitter.com/mtD5LQjaWf