Oh, So This Is What West Wing Staffers Do When Biden Speaks Live 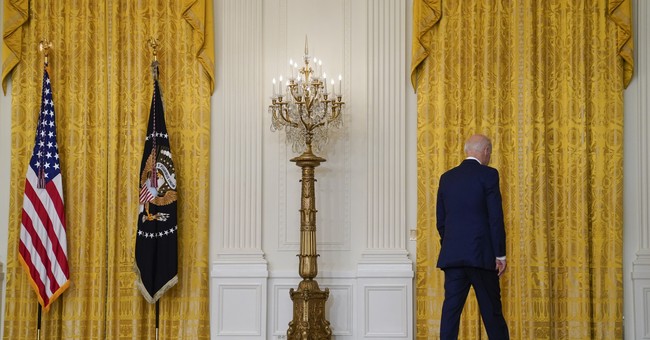 It's no secret that President Joe Biden is a gaffe machine, fumbling on everything from the names of his cabinet secretaries and advisors to dates to what tornadoes are called these days. Working for Biden, especially in the White House communications office, can't be easy. With accusations that he's suffering from diminished capacities and prefers to hide out in basements or on vacation rather than take questions from the press or appear in public, the White House doesn't really have an option other than to wind him up and trot him out in front of a teleprompter and leave the rest to fate.

The anxiety of this situation, according to new reporting, means that Biden staffers have developed coping mechanisms — like muting or turning off TVs — whenever the leader of the free world is speaking. POLITICO explains that "When Biden gives public remarks, some White House staffers will either mute him or turn off his remarks, according to White House officials."

WHOA: Joe Biden’s own staffers mute him when he’s on TV taking questions, and plead with him not to take any questions at all.

Why? They are fearful of the bonkers things that will undoubtedly come out of his mouth.

Things can't be good if the people crafting White House messaging find it necessary to avoid hearing the President relay what they wrote for him. As the report explains, Biden's "verbal miscues have been causing headaches for him and his team" and acknowledges "Biden has delivered several self-inflicted wounds during freewheeling Q&A sessions that required immediate clean-up," and POLITICO has receipts:

On Afghanistan, he told reporters that a Taliban takeover of the country was "highly unlikely," said Al Qaeda was "gone" from Afghanistan when it wasn’t, and declared that he’d seen "no question of our credibility" from allies when there had been a lot.

Biden has even flubbed scripted remarks, such as when he said the administration had evacuated 90 percent of Americans from Afghanistan when he was supposed to say 98 percent.

It’s not that they’re indifferent to what their boss has to say. Indeed, their livelihoods are directly invested in it. Rather, they’re filled with anxiety that he’s going to take questions from the press and veer off the West Wing’s carefully orchestrated messaging.

“I know people who habitually don’t watch it live for that reason,” said one current official.

Biden’s advisers have urged him to answer fewer of the questions being shouted at him by reporters covering his events. While the president sometimes obliges and quickly leaves the podium after remarks, he has a tendency to buck those staffers trying to rein him in.

Apart from the gaffes and confusion over things like the difference between the states of Iowa and Nevada and the city of Nevada, Iowa, Biden often speaks as though he's not in charge of his own administration.

Saying things like he's "going to get in trouble," for answering questions from reporters and that he "was instructed to call on" certain preapproved members of the press for questions suggests that Biden is saying the quiet part out loud. His aides are trying to keep a tight leash on their boss, but he throws caution to the wind and barrels into rambling answers anyway.

Joe Biden says that he "was instructed to call on" specific reporters for questions.

Who is calling the shots here? pic.twitter.com/K24AH81g1L