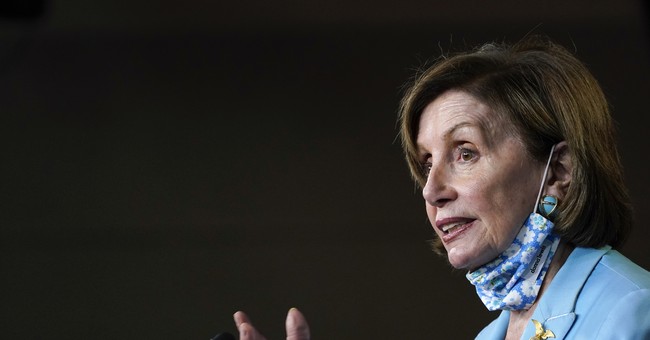 Refusing to wear a mask in parts of the U.S. Capitol complex might land you in handcuffs, according to a bulletin published by the United States Capitol Police Wednesday. The directive comes from the USCP Chief J. Thomas Manger, revealing how the agency is going to handle members of Congress, their staff, and visitors who do not wear masks — regardless of their vaccination status.

"On July 27, 2021, the Centers for Disease Control and Prevention (CDC) issued new guidance that all individuals, vaccinated and unvaccinated alike, should wear a mask in indoor spaces to reduce the spread of the Delta variant of COVID-19," the bulletin explains.

In today’s edition of Pelosi’s abuse of power, Capitol Police have been directed to arrest staff and visitors to comply with her mask mandate for vaccinated individuals.

For Members, they advise not arresting but “reporting Members to SAA for their failure to comply.”

"Based on this information, the Office of Attending Physician (OAP) advised that Congress follow the CDC's guidance to require mask wearing in interior spaces to help reduce the risk of COVID-19 infection," it continues. Never mind, apparently, the fact that being vaccinated was — until this week's new CDC guidance reversing earlier protocols — considered the best way to protect against the Wuhan coronavirus.

"Therefore, effective immediately, to promote the good health and well-being of our employees, all USCP personnel must wear a mask at all times when in interior spaces throughout the Capitol Grounds," again regardless of whether an employee is vaccinated or not.

It's not just Capitol Police who are required to mask up again as House Speaker Nancy Pelosi (D-CA) has also mandated mask wearing "in all House Office Buildings, the Hall of the House, and House Committee meetings" for all. As a result, "USCP officers who work in the House Division or on the House-side of the Capitol Division shall enforce this mask policy on all staff and visitors within the above noted locations."

Enforcement of the reimposed mask mandate varies depending on who you are, according to the USCP bulletin. "Although this applies to Members of Congress, officers should not arrest any Member for failure to wear a mask or to comply with the mask mandate," it explains. "Any Member who fails to comply with a request to wear a mask should be reported to the House Sergeant at Arms' office."

And while mask-refusing representatives are just to be tattled on to the SAA's office, House staff and visitors will, according to the bulletin, be in more serious trouble.

"If a visitor or staff member fails to wear a mask after a request is made to do so, the visitor or staff shall be denied entry to the House Office Buildings or House-side of the U.S. Capitol. Any person who fails to either comply or leave the premises after being asked to do so would be subject to an arrest for unlawful entry" under "D.C. Code." One exception to the rule applies to staffers who aren't wearing a mask while accompanying a Member, who apparently won't be arrested but will be "reported to a supervisor who will, in turn, refer the matter to the House Sergeant at Arms."

So despite everything said by Pelosi about her select committee on January 6th and the vital importance of Capitol Police, her reversed mask mandate has turned the USCP into glorified hall monitors while they and the House Sergeant at Arms most assuredly have more serious matters to attend to, such as preventing future attacks on the Capitol.

House Republicans responded to the new policies by accusing Speaker Pelosi of ignoring science and engaging in political theater.

After speaking with the House Physician, it is clear Pelosi used him to provide political cover to impose a mask mandate in the House Chamber using unsubstantiated CDC guidance.

After House Republican Leader Kevin McCarthy (R-CA) joined others in his caucus in questioning the science behind Pelosi's reinstatement of a mask mandate for all, the Speaker called him "a moron," to which McCarthy pointed out the disparity between House and Senate rules on masking.

When asked by @frankthorp about @GOPLeader’s criticism of the mask mandate being reinstated in the House, @SpeakerPelosi responds as she’s getting in her SUV: “He’s such a moron.” pic.twitter.com/2WUwE3A9wR

.@GOPLeader responds to @SpeakerPelosi calling him a “moron” in response to his criticism of the House mask mandate.

“Well if she’s so brilliant can she tell me where the science in the building changes between the House and the Senate?” he said. (H/t @AnnieGrayerCNN)

And because no mask mandate is complete without almost immediate hypocrisy from those who levy such rules, Republicans pointed out Pelosi and the House Attending Physician were both spotted without their faces covered on the day new mask requirements were announced.

Siri: **shows picture of the House Attending Physician on the day Pelosi re-instated mask mandates in the House** pic.twitter.com/ky5Vd1nYSn

Here are the facts, @SpeakerPelosi:

?85% of House Members are vaccinated
?70% of the Congressional workforce is vaccinated
?Transmission rate on the Hill is .5%
?Senate has no mask mandate

??Pelosi's political theater is only aimed at distracting from her radical agenda. https://t.co/jAw9giM0YL

Queen of hypocrisy Pelosi reinstates House mask rule, while not wearing a mask. I sued her in federal court yesterday for this nonsense. pic.twitter.com/vqk8iqvUsz