U.S. Updates Alliance with Japan, Drones to Launch Next Year 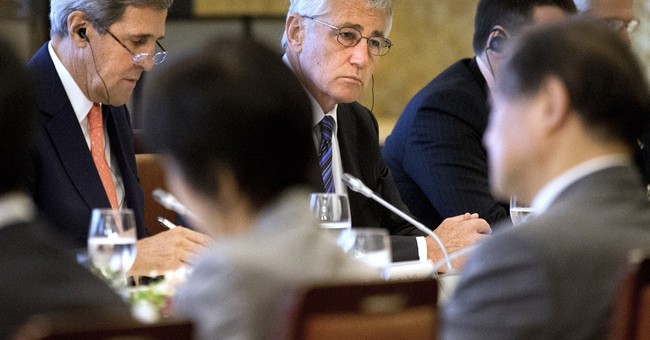 United States defense officials revised the 1997 Guidelines for U.S. and Japan Defense Cooperation Thursday to include drone surveillance and U.S. Marine relocation. The meeting between Secretary of State John Kerry, Secretary of Defense Chuck Hagel and their Japanese counterparts in Tokyo was the first of its kind in 16 years.

Together, the countries issued a Joint Statement with the intention of promoting “a more robust alliance and greater shared responsibilities.”

“Our bilateral defense cooperation, including America’s commitment to the security of Japan, is a critical component of our overall relationship and to the Obama administration’s rebalance to Asia-Pacific,” Mr. Hagel told reporters.

At the end of the 10-page report is a bullet-point list of “advanced capabilities.” These include replacing helicopters with Ospreys, sending U.S. Navy surveillance aircrafts, U.S. Air Force drones and deploying a U.S. Marine aircraft which reportedly combines the “most lethal fighter characteristics.”

“These advanced capabilities include, but are not limited to:

To sustain a “forward presence” of U.S. forces approximately 9,000 U.S. Marines will be relocated from Okinawa to areas outside of Japan in the beginning of 2020. One key location will be Guam, which they hope to develop as a strategic hub.

“The foreign and defense ministers of the two countries also put a price on what Japan will contribute to the relocation of Marines out of Okinawa to Guam and other locations in the Asia-Pacific region. Japan will pay up to $3.1 billion of the move.”