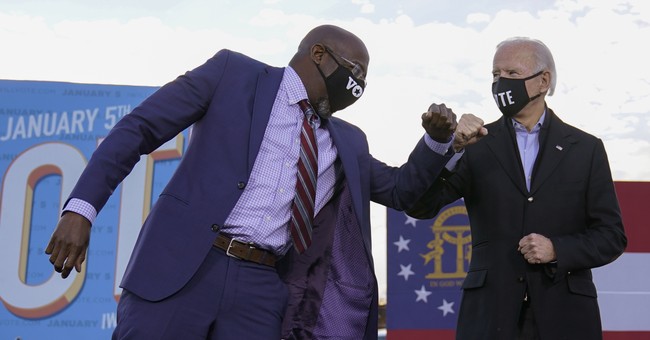 On Wednesday, Susan B. Anthony List released a six-figure ad targeting Sen. Raphael Warnock (D-GA), as well as other vulnerable Democrats for their support of forcing taxpayers to fund elective abortions. This, as Mallory Quigley, SBA List's vice president of communications confirmed to Townhall, includes "abortions without limits."

After decades of bipartisan agreement that taxpayer shouldn't be forced to pay for abortions, Dems are launching an all-out assault on this commonsense policy.

That's why we've launched a 6-figure campaign to fight back.

Such members, Quigley noted, have "policy positions completely out of line with their constituents," and thus the ad campaign is about "exposing extremism" when it comes to these members.

SBA List, Quigley shared, "want[s] lawmakers to feel pressure," and so the ad campaign urges constituents to call their representatives to tell them not to force taxpayers to fund abortion on demand.

Since the inception of the Hyde Amendment in 1976, such protections have passed with bipartisan support. Not only did this include during the Obama administration, when President Joe Biden served as vice president, but during the decades Biden served as a senator.

Rep. Chris Smith (R-NJ) highlighted that past support. As he spoke in support of his bill, H.R. 18, the No Taxpayer Funding for Abortion Act on the House floor, the congressman referenced a letter from then Sen. Biden from December 26, 1977 addressed to a Delaware constituent.

The letter is particularly eye-opening, as not only does it show Biden supported the Hyde Amendment, he supported the stricter version over that which allowed for more exceptions. The current policy now includes exceptions for rape and incest.

As you probably already know, the Senate and the House of Representatives finally agreed on language dealing with the problem of medicaid-covered abortions December 15. The 1977 fiscal year appropriations bill prohibited the use of federal funds to pay for abortions, "...unless the life of the nother is in danger." This is the position which I have consistently supported.

During consideration of the 1978 fiscal year appropriation bill for the Department of Health, Education and Welfare, the House again passed this same language. The Senate, however, passed a broader definition of the circumstances under which medicaid funds could be used to pay for an abortion. I did not support this version.

There's also an April 7, 1994 letter, in which then-Sen. Biden continued to brag about his stance on Hyde, to a Mr. Michael Gregg in Wilmington, Delaware. The senator is responding to a postcard from Gregg which reads "Please don't force me to pay for abortions against my conscience," to which Biden writes "I agree with you."

The letter further mentions that Sen. Biden "will continue to abide by the same principle that has guided me throughout my 21 years in the Senate; those of us who are opposed to abortion should not be compelled to pay for them. As you may know, I have consistently -- on no fewer than 50 occasions -- voted against federal funding of abortions."

Towards the letter's closing, Biden aligns himself with Gregg and others who plead that their government not force them to fund elective abortions with their taxpayer dollars. Biden writes that "the government should not tell those with strong convictions against abortion, such as you and I, that we must pay for them."

Fast forward to over 40 years later, when the Biden administration's $6 trillion budget proposal purposefully excludes Hyde. This is "a huge opportunity right now in Congress for pro-abortion forces," according to Quigley.

"We have a real opportunity here to make this as untenable as it can be for lawmakers in battlegrounds," to get rid of Hyde, Quigley shared, also stressing that "we have a chance to save Hyde, but it will take extreme vigilance."

As a Wednesday press release from SBA List notes, the Hyde Amendment is popular with a majority of Americans, in that 58 percent oppose using taxpayer dollars to fund abortion in the United States.

The poll in question is from the annual Knights of Columbus poll, released in January. SBA List has long been involved in a "#HydeSavesLives" campaign, to highlight the over 2.4 million lives saved and ensure that taxpayers are protected from having to fund elective abortions in addition to saving the unborn from abortion.

THREAD: The Hyde Amendment ensures Americans aren't forced to pay for abortions with their tax dollars.

But now Democrats are trying to repeal it.#ProLife members of Congress are fighting back:#HydeSavesLives pic.twitter.com/V52jar817Q