McConnell Rejects Pelosi's January 6 Commission for Being 'Partisan by Design' 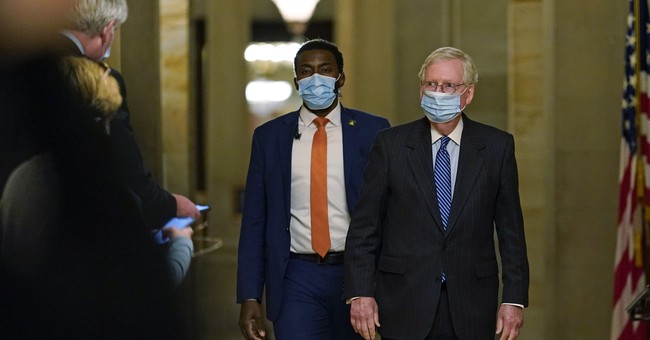 Senate Minority Leader Mitch McConnell (R-KY) rebuked Democrats’ effort to form a bipartisan commission to study and evaluate the horrific events that occurred that the United States Capitol on January 6, when supporters of former President Trump stormed the building.

House Speaker Pelosi (D-CA) proposed a commission with 7 Democrats and 4 Republicans to study the January 6 riot, which McConnell quickly rejected for being “partisan by design.” The Republican leader said that the commission must be fairly balanced, and should also study political riots that occurred over the summer by left-wing groups.

McConnell said on Wednesday that if Congress were to attempt a "broader analysis of toxic political violence," that "we cannot have artificial cherry-picking of which terrible behavior does and does not deserve scrutiny.”

McConnell: "An inquiry with a hard-wired partisan slant would never be legitimate in the eyes of the American people. An undertaking that is uneven or unjust would not help our country.”

McConnell says any 9/11-style commission to investigate the Jan. 6 Capitol attack should also include a broader look at mob-like violence around the country.

"An inquiry with a hardwired partisan slant would never be legitimate in the eyes of the American people," he says.

McConnell warned that the “full scope” of political violence must be studied.

“We could do something narrow that looks at the Capitol, or we could potentially do something broader to analyze the full scope of the political violence problem in this country,” he continued. “We cannot land at some artificial, politicized halfway point.”

Pelosi’s aim is to mirror the commission formed to study the terrorist attacks that occurred on September 11, 2001, but clearly has minimal interest in studying the broader picture of political riots.