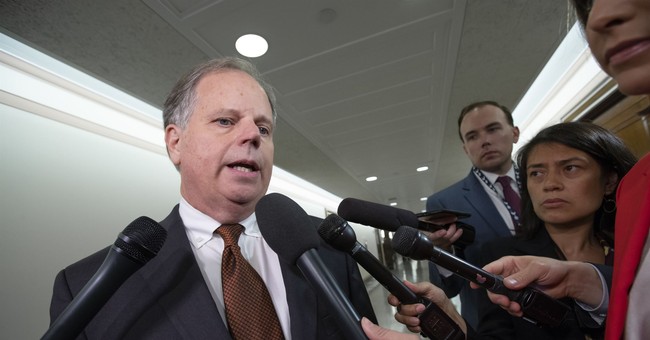 UPDATE: Despite noting that his first choice is his friend Joe Biden, Sen. Jones conceded that he will support the eventual Democratic presidential nominee.

"We'll end up supporting the nominee," he said. "I'm not going to run away from that."

Sen. Doug Jones (D-AL) is one of the more vulnerable senators on the 2020 map, and his vote to convict President Trump in the Senate’s impeachment trial last month moved the race to “Lean Republican.”

In an interview on Fox News's America’s Newsroom, Sen. Jones avoided a firm yes or no answer to Sandra Smith’s question of whether or not he, and the Democratic Party at-large, would support his colleague Sen. Bernie Sanders (D-VT) if he received the Democratic nomination for president.

Sen. Jones has endorsed Joe Biden, and is confident that the former vice president will win Alabama’s Super Tuesday primary tomorrow, fresh off of his victory in South Carolina. Sanders came in a distant second.

Ahead of Alabama's primary, Sen. Doug Jones says "I think Joe Biden is going to win. I've always believed that. This is his state." https://t.co/aTTThkAZWT pic.twitter.com/mgO9ZeqjEc

.@DougJones, 2019: “But whatever we do, I’ll end up supporting the nominee. We’re not going to run away from that."

After Biden’s huge win in South Carolina, the Democratic Primary is still competitive, but the prospect of a Sanders nomination, encompassed by radical policies, poses an imminent threat to vulnerable Democratic candidates such as Sen. Jones. President Trump predicted the DNC is going to try to steal the nomination from Sanders (again).

Pete Buttigieg is OUT. All of his SuperTuesday votes will go to Sleepy Joe Biden. Great timing. This is the REAL beginning of the Dems taking Bernie out of play - NO NOMINATION, AGAIN!